Dempsey: Future to focus on training 'for all potential forms of warfare' 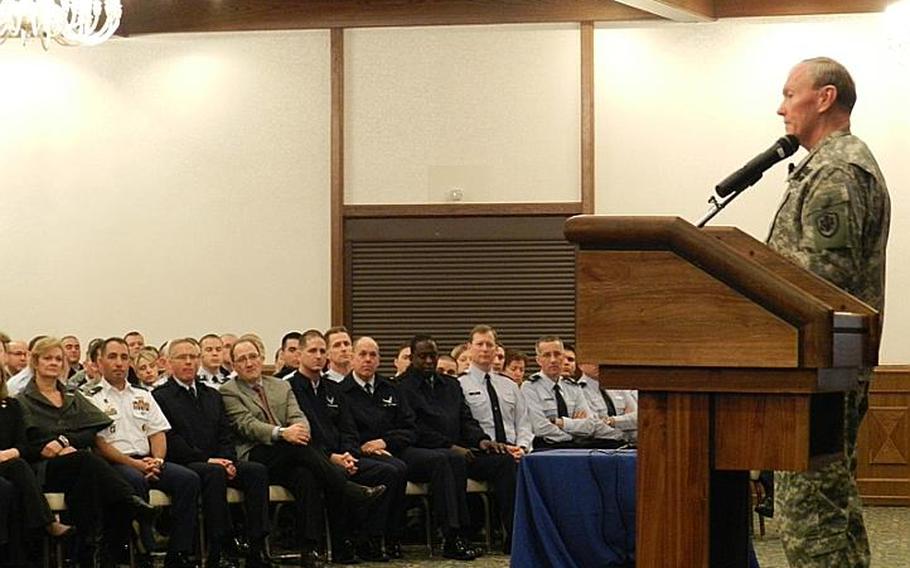 Buy Photo
Gen. Martin Dempsey, chairman of the Joint Chiefs of Staff, speaks to servicemembers and civilians during a town hall meeting Dec. 19, 2011, at Ramstein Air Base, Germany. Dempsey touched upon several topics, including education benefits and retirement. (Pary Smith/Stars and Stripes)

Buy Photo
Gen. Martin Dempsey, chairman of the Joint Chiefs of Staff, speaks to servicemembers and civilians during a town hall meeting Dec. 19, 2011, at Ramstein Air Base, Germany. Dempsey touched upon several topics, including education benefits and retirement. (Pary Smith/Stars and Stripes)

RAMSTEIN AIR BASE, Germany &mdash; A day after the last U.S. troops left Iraq, the chairman of the Joint Chiefs of Staff said the U.S. military must redirect its focus of the last 10 years from preparing for continuous deployments to training, with an eye toward the growing strategic importance of the Pacific region.

&ldquo;We have to restore readiness for all potential forms of warfare,&rdquo; Army Gen. Martin Dempsey told a crowd of more than 400 U.S. military members and civilians at a town hall meeting Monday in Ramstein&rsquo;s officers&rsquo; club.

&ldquo;If you&rsquo;re a major or a staff sergeant or younger, you have known nothing in your professional lives except deployments,&rdquo; Dempsey said. &ldquo;As we now face the evolution of becoming an armed force that is still deploying &hellip; but also now has to go back to understanding how to train and prepare for other kinds of conflicts and other environments, we will transition from being an Army that lives to deploy to an Army that is still deploying but that is also living to train. &hellip;&rdquo;

In the last 10 to 15 years, Dempsey said, there&rsquo;s been &ldquo;a pretty prominent shift of strategic risk towards the Pacific,&rdquo; as defined by changing demographics and the region&rsquo;s rising economic and military power.

That doesn&rsquo;t mean the U.S. military is &ldquo;going to pick everybody out of Europe and put them in Japan&rdquo; or South Korea, he said, but &ldquo;you will see some shifts.&rdquo;

Dempsey didn&rsquo;t say what those shifts might be, but stressed that &ldquo;as we shift, we&rsquo;re going to have to think through, how do we maintain the foundation of our traditional strategic relationships,&rdquo; with the country&rsquo;s current partners and allies.

As a global power, &ldquo;we cannot afford to pick a point on the spectrum of conflict and say &lsquo;that&rsquo;s what we&rsquo;re going to be best at,&rsquo; &rdquo; he said. &ldquo;We have to be capable of providing options to our leaders to deal with problems across the entire spectrum.&rdquo;

One area future training may focus on is the ability of the U.S. military to operate in areas without fixed bases, unlike the so-called &ldquo;forward operating bases&rdquo; in Iraq and Afghanistan, complete with working fiber optics and satellite dishes, for example.

&ldquo;We&rsquo;ve got to rekindle our skills to be mobile, to maneuver and to have the ability &hellip; to establish architectures that don&rsquo;t always exist,&rdquo; Dempsey said.

The U.S. military also will look at how to integrate new capabilities into training, such as cyber expertise and special forces, the number of which have quadrupled over the last decade or so, according to Dempsey.

Dempsey stopped at Ramstein as part of his first United Service Organizations holiday tour since President Barack Obama earlier this year chose the Iraq war veteran to be his top military adviser. Dempsey last week joined Defense Secretary Leon Panetta at a ceremony in Iraq marking the end of the U.S. military mission there.

Several questions from the audience dealt with the pending budget cuts. Air Force Master Sgt. Keith Vernon, U.S. Air Forces in Europe command fitness superintendent, asked Dempsey whether the sacrifices the current generation of military members had made during the wars in Iraq and Afghanistan would be considered when military planners look at where to save money.

Dempsey said while a panel will likely be commissioned to study the issue, he felt confident &ldquo;that those who are currently serving will be grandfathered&rdquo; and won&rsquo;t lose any current benefits.

If, however, &ldquo;the bottom of our economy falls out,&rdquo; then &ldquo;we&rsquo;re going to have to all roll up our sleeves and think through this again.&rdquo;