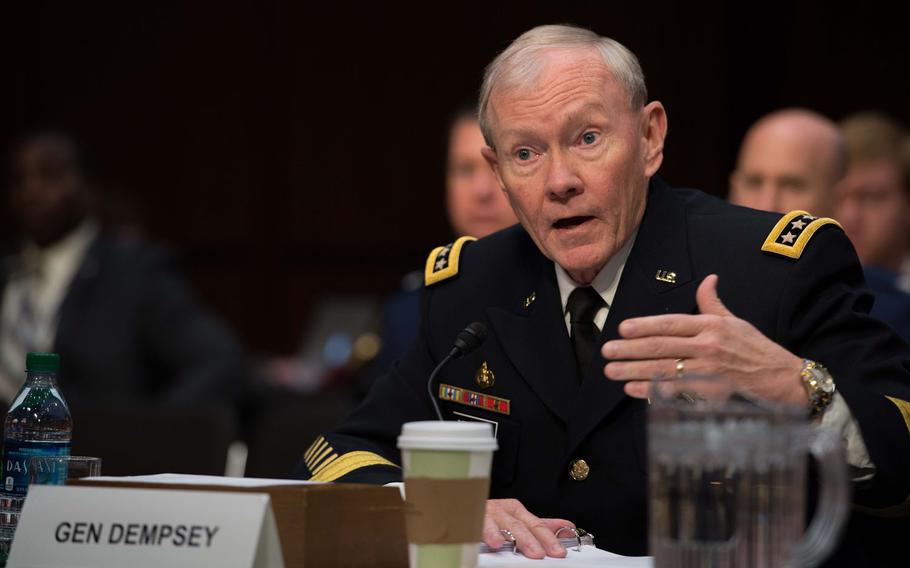 WASHINGTON — The Defense Department has limited time to show results in the effort to combat sexual assault in the ranks, the nation’s top uniformed leader said Thursday.

So far, most of the measures by which the department has begun gauging its efforts haven’t shown much progress, Chairman of the Joint Chiefs of Staff Gen. Martin Dempsey said during a phone conversation with reporters and bloggers.

And if it turns out the military finally can’t handle the job, Dempsey said he’ll no longer oppose Congress taking leadership of the issue out of the military’s hands.

“If it occurs that after a period of very intense and renewed emphasis on this that we can’t solve it, I’m not going to fight it being taken away from us,” Dempsey said during a phone conversation with reporters.

But Dempsey made clear he thinks commanders are up to the task of fighting sexual misconduct and assaults, reports of which have risen dramatically in recent years. Racial integration, fights against drug abuse and the inclusion of gay and lesbian troops were all successfully overseen by commanders, he said.

“In every case, the way we’ve led our way through those issues was relying upon commanders to do what they’re held accountable to do, which is to lead, and to lead equitably and to lead aggressively,” he said.

Earlier this year, an effort led by Sen. Kirsten Gillibrand, D-N.Y., came within five votes of taking authority over prosecutions for sexual assault and other serious criminal offenses away from commanders and giving it to independent military prosecutors.

Pentagon leaders and influential senators fought the bill, however, and a similar proposal made little progress in the House of Representatives. Dempsey indicated Congress’ decision gives the Pentagon a chance to prove it is up to the task, but not unlimited time. Among the reforms put in place both by the Pentagon and by Congress are new rules moving decision-making higher up the chain of command, and safeguards against retaliation.

“We’ve been given about a year to demonstrate both that we will treat this with the urgency that it deserves, and that we can turn the trend lines in a more positive direction,” he said. “We aren’t going to turn it around in a year, but we can certainly demonstrate to the chain of command, including the Secretary of Defense and the president, that we can turn the trend lines.”

The Joint Chiefs meet monthly to monitor progress on 12 measures of DOD’s fight against sexual assault, Dempsey said. The metrics include the number of sexual assault reports, how many cases are taken to trial and reviews of command climate toward sexual assault cases, he said.

“The needle hasn’t moved on most of them yet, but we’re very much in the first three months or so of this,” he said. “The one place the needle has moved in reporting. We see that as positive, but we’ve got to see the other metrics move as well.”