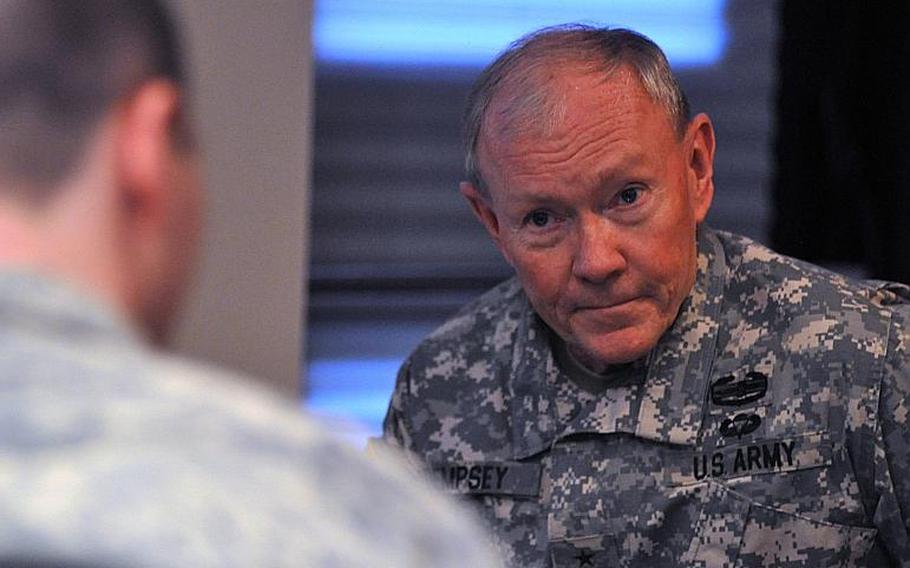 AVIANO AIR BASE, Italy — The U.S. military’s senior leader said Wednesday that he’s a strong supporter of maintaining a sizeable presence overseas, including in Europe, despite budget constraints, because of the proximity to potential hotspots.

But he said there is room to cut infrastructure in the States.

Gen. Martin Dempsey, chairman of the Joint Chiefs of Staff, said despite multi-million-dollar budget cuts looming for the Pentagon, he would advocate keeping tens of thousands of troops in Europe, even as the United States focuses more attention on the Pacific and gets set to withdraw thousands of troops from Afghanistan.

“Three reasons come immediately to mind,” he said during a brief interview before addressing an all-hands gathering on base.

The first, Dempsey said, is maintaining and strengthening partnerships with NATO allies.

“Every time we have gone to war, at least some of them have chosen to go with us,” he said.

“We can talk about building other partnerships,” he told airmen later. “But we have to maintain the partnerships we have.”

He said when a group of airmen from the 555th Fighter Squadron from Aviano trained with their Polish counterparts earlier this year, it was obvious that the Polish airmen were learning from the experience.

Secondly, Dempsey said that bases in Europe, the Pacific and elsewhere are closer to potential conflicts than those in the States. F-16s stationed in Aviano, for instance, are closer to Africa and the Middle East than they would be if they were based in the States.

The third reason, he said, “and it’s often overlooked,” is cultural influences troops overseas absorb. They pick up ideas and new strategies by living in different environments, he said.

Dempsey said there are military facilities in the States that should be shuttered and that would save the Pentagon money, though he did not elaborate on which those might be. He said he knows it’s a difficult argument to make in Congress, where jobs and potential votes are at stake.

“I’m not wedded to a particular mechanism” for closing Stateside bases, he said, “but we do have excess infrastructure.”

He told airmen that closing bases alone wouldn’t solve the Pentagon’s budget woes, however. Personnel will be trimmed and the benefits they receive are being looked at as well.

“If I had any advice, I’d tell you that, now’s the time to do the best at what you’re doing, because we are going to shrink.”

He said every leader’s first duty is to make sure the troops they send into battle are better trained and better equipped than anyone they’re facing. And in order for that to happen, “everything is on the table” when it comes to cuts.

Dempsey also confirmed the Pentagon was in the process of reviewing the unified command structure, but his “instinct” is “likely to preserve the status quo,” leaving U.S. Africa Command and U.S. European Command separate.

He said the decision to stand up AFRICOM “is looking more and more prescient” in light of the issues and conflicts the continent is now facing. He also said it made sense to him to keep the command headquartered in the same time zone, whether that means keeping it in Stuttgart or moving to Africa or elsewhere in Europe.

Defense officials have been reviewing whether AFRICOM could be merged with EUCOM. Military observers have long suggested that there could be cost savings in moving AFRICOM headquarters to the States.