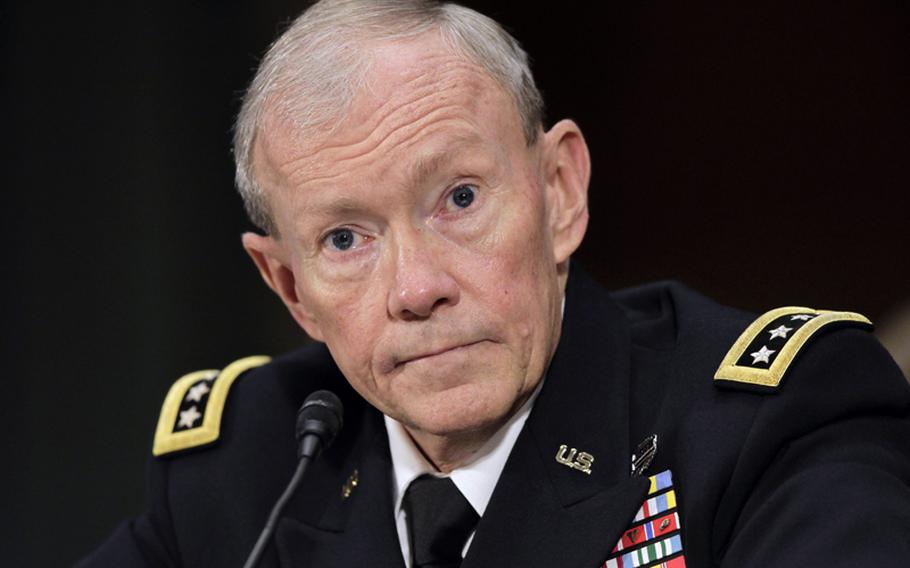 WASHINGTON &mdash; The presumed incoming chairman of the Joint Chiefs of Staff told lawmakers at a confirmation hearing Tuesday that a $400 billion cut in defense spending by 2023 would be difficult but possible, but the more ambitious funding reductions under consideration would be &ldquo;extraordinarily difficult and high risk.&rdquo;

Army Gen. Martin Dempsey, who has been nominated to take over the post from Adm. Mike Mullen this fall, said that the Pentagon is prepared to make sizable budget sacrifices in coming years, in keeping with the budget challenges facing the country at large.

He called the national debt &ldquo;a grave concern&rdquo; for national security, but also warned against cutting too deeply into military muscle, or cutting too haphazardly and endangering the force as a whole.

Dempsey and lawmakers on the Senate Armed Services Committee did not specifically address the looming debt ceiling deadline during Tuesday&rsquo;s hearing, but the theme of fiscal responsibility and defense spending curbs ran through the event as it has in nearly every military confirmation over the last two months.

According to the White House, Congress has less than a week to approve a new deal to increase the amount of money the federal government can borrow to pay current budget obligations, or risk a national fiscal disaster. Some lawmakers have insisted that any increase in that debt limit must be tied to long-term spending cuts, to reign in uncontrolled federal spending.

Proposals include a host of military spending reductions, including several plans that call for nearly $1 trillion in cuts over the next decade.

Separately, the White House has called for $400 billion less in defense spending over the next 12 years and hinted at even larger reductions.

Dempsey said military officials have never before been asked to consider such an ambitious budget overhaul in the midst of two overseas wars, but Pentagon leaders are aware of their role in helping stabilize the American economy.

&ldquo;If we don&rsquo;t do our part, then we&rsquo;ll be seen as simply defending the &lsquo;military industrial complex,&rsquo;&rdquo; he told lawmakers. &ldquo;At the same time, we have an all-volunteer force with whom we must keep faith.&rdquo;

Dempsey said military pay, health care costs, retirement allowances and other personnel benefits are all on the table for future budget cut discussions, along with end-strength reductions and weapon program acquisition. To reach real savings, he said, the cuts can&rsquo;t come from any single budget area, but from targeted cuts and efficiencies throughout the department.

Lawmakers also peppered Dempsey with questions about Afghanistan and Iraq at the confirmation hearing. He voiced support for White House plans to draw down troop levels in both countries, but said he&rsquo;d back a proposal to keep a contingent of U.S. forces in Iraq past 2011 if the government there makes the request.

Mullen is scheduled to retire in September. Dempsey, who serves as the Army chief of staff, is expected to be confirmed by the full Senate in coming days.