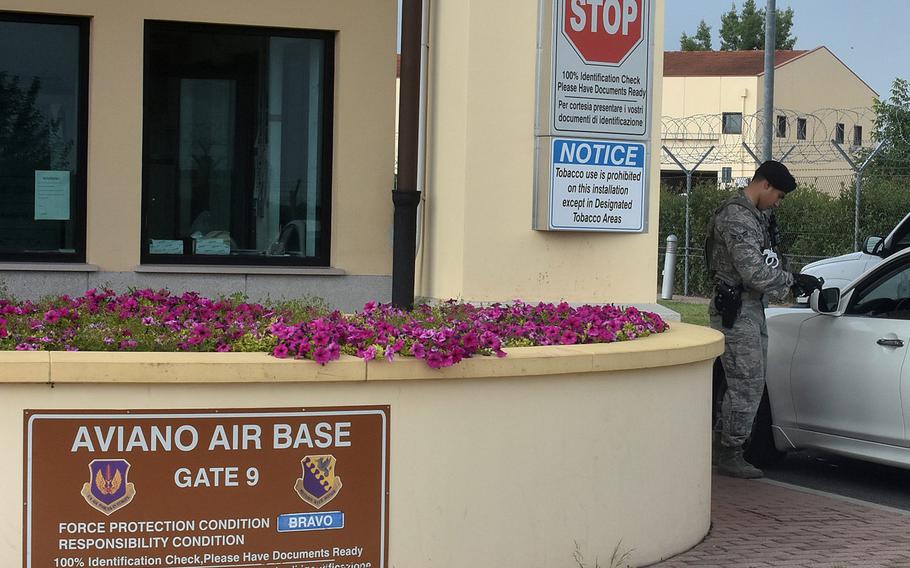 An airman with the 31st Fighter Wing, Aviano Air Base, Italy, conducts base access control and security duty at the air base's main gate. A demolition crew working on Aviano Air Base caused last week?s 15-hour power outage when they accidentally cut through a powerline, officials said Tuesday, Sept. 23, 2019. (Kent Harris/Stars and Stripes)

A company contracted to tear down old buildings in the base’s Area Two, which has been closed since 2016, cut through an electrical cable on Tuesday morning last week, causing the outage that affected the adjacent area where the base’s schools, medical and dental clinics and other facilities are located, officials said.

The flight line is in a different area of the base and was not affected.

The outage began at around 9:00 a.m. last Tuesday and power wasn’t restored until after midnight, information on the base’s Facebook page says.

“The contractors who cut the line, along with personnel with the 31st Fighter Wing’s Mission Support Group, worked diligently through (Tuesday) evening to have the issue repaired,” public affairs officer 1st Lt. Danielle Lucero said by email.

A temporary repair was made to the power line, but a “permanent solution will require another power outage that will be scheduled to ensure minimal impact to the base,” Lucero said, without specifying when that would happen.