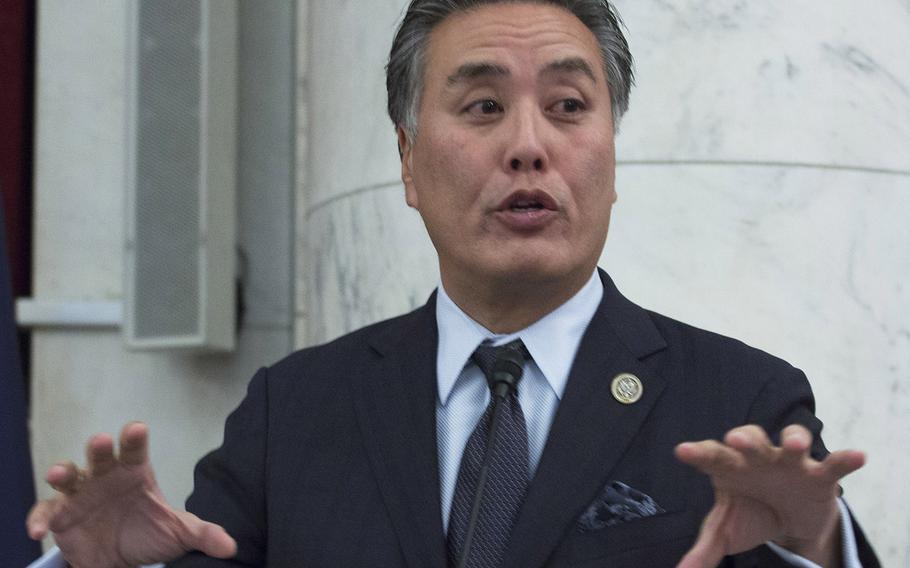 WASHINGTON — When Rep. Mark Takano, D-Calif., took the stage in August at the American Legion convention in Minneapolis, he delivered a speech that tied together his heritage with the present-day debate over U.S. citizenship and who has earned it.

He talked about his great uncles, Japanese Americans, who fought during World War II while their families were forced into internment camps in the United States. He also described a recent trip to Mexico, where he visited veterans who joined the military as immigrants and had since been deported.

It was a stump speech in Takano’s bid to be the next Democratic leader on the House Committee on Veterans’ Affairs.

“Today, I want to share a vision for what the Committee on Veterans’ Affairs can accomplish in the 116th Congress,” Takano told the crowd of American Legion members. “A shared vision of an America that lives up to the promises it made to our veterans and meets their needs. An America that dares to be better than it was yesterday and focuses on being better tomorrow.”

With the House majority up for grabs in the Nov. 6 midterm elections and possible control of the lower chamber shifting to the Democrats, Takano could become the next chairman of the VA committee.

The current ranking Democrat on the committee, Rep. Tim Walz, is retiring from Congress and running for governor of Minnesota. Walz has lent Takano his support.

“Our veterans deserve an effective chairman that will guide the committee during these challenging times, and I am confident Mark is that leader,” Walz wrote in a letter this month to other colleagues on the committee.

With a majority, Democrats across-the-board would have the power to set House priorities when the 116th congressional session begins in January. For Takano, those priorities would be to stop the deportation of veterans and establish more effective citizenship procedures for immigrant servicemembers. He wants to fill the tens of thousands of vacancies across the Department of Veterans Affairs and stop for-profit colleges from targeting and cheating veterans, he said.

The past two years, with a Congress and White House led by Republicans, the House and Senate veterans affairs committees have pushed through major bipartisan reforms, from expanding veterans’ education benefits to overhauling the VA’s private-sector health care programs and giving VA leaders more authority to fire their employees.

Lawmakers often claim veterans issues are a rare area of bipartisanship in Washington, and for the past two years that sentiment has proved mostly true. If control switches in the House, which pollsters contend is more likely than Democrats taking a majority in the Senate, it creates questions of whether the two chambers will continue to work together amicably.

In Takano’s speech to the American Legion, he vowed to work with Republicans and VA Secretary Robert Wilkie. However, one of his top priorities – veteran deportation and citizenship for immigrant servicemembers – is a topic Republicans in Congress have been unwilling to touch.

As Takano looks toward a leadership spot on the VA committee, other lawmakers are fighting to keep theirs.

Rep. Phil Roe, the Republican chairman of the House Committee on Veterans’ Affairs, is up for re-election in Tennessee’s first district.

Sen. Jon Tester, the ranking Democrat on the Senate Veterans’ Affairs Committee, has been trying to keep the lead in a tightening race in Montana. He’s often included in lists of the toughest Senate races for Democrats to win this year.

President Donald Trump has repeatedly gone after Tester – at rallies and via Twitter – for his role in sinking Rear Adm. Ronny Jackson’s nomination to be VA secretary. Tester publicized accusations that he had heard from Jackson’s colleagues, who purportedly said he drank on the job and inappropriately handed out controlled substances. The Defense Department Inspector General subsequently opened an investigation into Jackson.

“Jon Tester led the Democrat mob in the effort to destroy the reputation of a great man,” Trump said this month during a rally in Missoula, Mont.

Tester has fought back, saying it was his constitutional responsibility to vet the nominee.

Whoever ends up leading the VA committees following the midterms – Republicans or Democrats – will be tasked with guiding the VA, which touts a nearly $209 billion budget, and overseeing a major overhaul of the VA’s private-sector health care programs, scheduled to be finished in summer 2019, as well as a multibillion-dollar project to create a new VA electronic health record system.