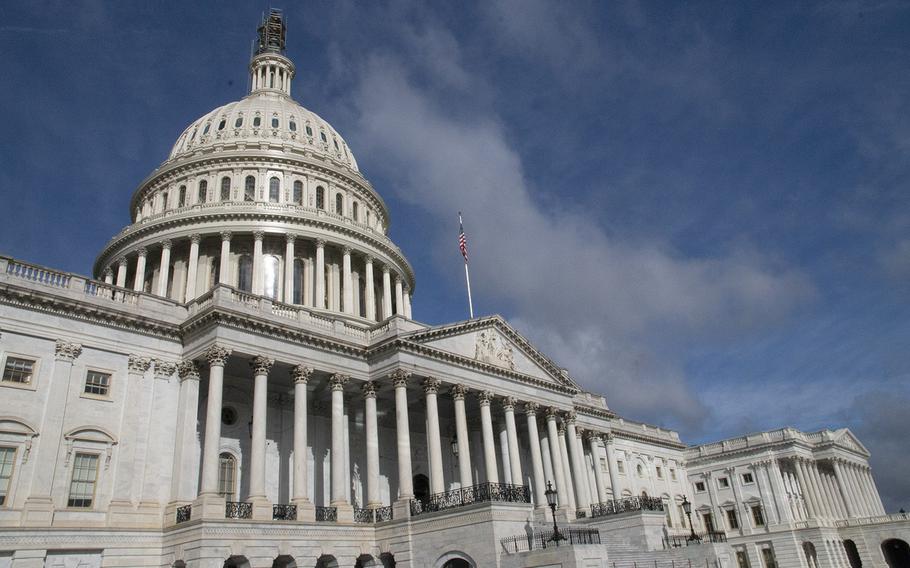 WASHINGTON — The fate of an ongoing military buildup, war oversight and decisions on who can enlist will rest in the hands of voters come November.

With hundreds of congressional seats contested in the midterm elections, control of the House — and maybe the Senate — could switch from Republicans to Democrats in January.

Democratic lawmakers poised to gain leadership roles in such a scenario say while some things will remain the same, new initiatives could gain priority.

“Two things: Donald Trump is still going to be president, and defense policy has always been a reasonably bipartisan issue,” said Washington Rep. Adam Smith, the ranking Democrat for the House Armed Services Committee, who could lead the committee if his party flips the lower chamber. “I think the biggest difference will probably be more oversight. … We’re not clear exactly where this administration is going with the military.”

Under Trump’s administration, Democrats have raised concerns about runaway federal spending fueling spikes in the U.S. deficit, the military’s role in the civil wars in Yemen and Syria, efforts to build up so-called “low-yield” nukes and the president’s extensive – and some contend outdated – war powers.

Democrats have also objected to a Trump campaign to install new restrictions on who can serve, from efforts to ban transgender troops to new obstacles for immigrant recruits.

Democrats “clearly feel passionate about this and they intend to make them issues,” said Kurt Couchman, vice president of public policy at Defense Priorities, a right-leaning Washington, D.C., think tank. “They really do have the possibility of elevating the issues (Democrats and Republicans) can agree on.”

In recent months, several polls have shown Democrats could win a majority of the House, and in some remote cases, the Senate, if a “blue wave” overtakes the Nov. 6 elections. All 435 seats in the House and 35 of the Senate’s 100 seats are up for grabs.

For example, a recent Washington Post-ABC poll projected voters prefer the Democratic candidate over their Republican opponent in their districts 53 to 42 percent. This, as opinion-poll analysis website FiveThirtyEight.com gives the House an 86 percent chance of flipping to Democratic control, while Republicans have a 78.4 percent chance of retaining the Senate.

Key committees hang in the balance There’s plenty at stake for the military and its servicemembers.

If Democrats capture control of either chamber, they would take over leadership of key committees, such as the House or Senate Armed Services Committee, that shape policy and spending at the Pentagon.

“Changing the person at the top of the committee can have consequences for what the committee’s priorities are, even if it’s a person in the same party,” said Molly Reynolds, a governance studies fellow at The Brookings Institution, a left-leaning Washington think tank.

For example, Sen. Jim Inhofe, R-Okla., took over as chairman of the Senate Armed Services Committee after the death of Arizona Republican Sen. John McCain in August. McCain was often at odds with Trump, at times holding up Pentagon nominees, while Inhofe has remained a loyal stalwart and is largely supportive of Trump and his efforts.

However, Sen. Jack Reed, D-R.I., the ranking Democrat on the Senate Armed Services Committee, said there will still be plenty of continuity on defense matters even if Democrats take control. He pointed to support for the National Defense Authorization Act, or NDAA, the legislation that dictates Pentagon policies and spending.

“The last year, the votes in both chambers were overwhelming bipartisan,” Reed said. “So, I don’t think they shift dramatically because the same leadership that was behind the support of the issues — the NDAA — would be in the leadership in the House and the Senate next year.”

New Congress, new budget woes While Reed doesn’t see as much of a shift in military policies if Democrats move into positions of power, he does see a struggle over so-called sequestration – automatic, across-the-board budget cuts.

“The key issue is sequestration,” he said. “We have priorities. We have to have money for them. And that’s where the battle will be.”

Lawmakers will have their hands full when a new Congress launches next year. They will need to address spending caps slated to return for the 2020 fiscal year under the Budget Control Act, or BCA.

Now, spending caps are slated to return for the 2020 fiscal year, which begins Oct. 1, 2019. If no deal is reached and budget caps are exceeded, it raises the threat of sequestration. Past cuts have had a degrading effect on the military, Pentagon officials, defense hawks on Capitol Hill and experts have said.

“The biggest issue has to be what happens with the Budget Control Act,” Couchman said. “If the caps aren’t raised, then (the Defense Department) is going to have absorb billion-dollar spending cuts from fiscal year 2019 to fiscal year 2020. That is probably unlikely; Republicans and Democrats would likely get together again, but there is a small possibility.”

“One of the biggest things that Congress will have to tackle in the next Congress, regardless of who’s in control, is the need for another budget deal to deal with the fact that the BCA caps kick back in for… 2020,” she said.

The fiscal year 2019 defense spending cap was set at $647 billion before the February budget deal was reached, and would now fall to $576 billion for the 2020 fiscal year if no action is taken, Reynolds said.

“There will be significant demands to increase that number,” she said. And if past efforts are any indication, “Democrats will demand an equivalent increase in the non-defense caps to go along with it.”

As far as the defense budget, Democrats have said now isn’t the time to go on a spending spree for “low-yield” nukes and other Trump-driven efforts.

In September, a group of Senate and House Democratic lawmakers introduced legislation to ban “low-yield” nuclear weapons, which they contend increase the chance of war. The United States is on track to spend more than $1.2 trillion in the next 30 years just to modernize and maintain its current nuclear arsenal, the lawmakers argued.

There’s also Democratic opposition to a Trump-driven plan to create a costly branch of the military called the Space Force to address defense for space-based endeavors. The move would cost about $13 billion for 10 years, Reed said.

“Space Force, to me, would be not the most effective way to deal with these issues,” Reed recently told reporters during a breakfast meeting at a Washington hotel. “Perhaps the model is not a Space Force, but something along the lines of Cyber Command, where you don’t have a special service, but what you have is a unified effort by all the services.”

New military priorities Democrats have also raised concerns over the lack of oversight in certain military operations, such as the U.S. strikes on Syria in April or the deadly November 2017 attack in Niger, West Africa, that left four soldiers dead.

“With the [former President Barack] Obama administration, there was a rigor to their decisions,” Smith said. “There seems not to be a similar rigor with the Trump administration.”

Some Democrats have pushed legislation to increase that oversight with legislation revamping the president’s war powers. Trump and his predecessors have operated off the authority to use military force, or AUMF, issued in response to the 9/11 terrorist attacks in 2001 and 2002 when the United States went to war in Afghanistan and Iraq.

The AUMF gave the president wide-ranging authority to direct the military to fight terrorist groups such as al-Qaida, the Taliban and Islamic State around the world. Since that time, the military has operated under those war powers in more than a dozen countries.

The AUMF legislation has played a role in Democrats’ push to stop U.S. military support in Yemen and reassess military action in Syria and elsewhere.

Last month, a bipartisan group of more than a dozen House lawmakers, led by Democrats, introduced legislation to end U.S. military involvement in Yemen by reassessing the president’s war powers.

U.S. forces have provided support for Saudi Arabia and the Yemen government in their fight against Iran-backed Houthi rebels, which some lawmakers contend the military has not been given proper authority to do. The U.S. forces have assisted in coordinating, refueling and providing target guidance and intelligence to the Saudi-led coalition in Yemen.

“I don’t think [U.S. assistance to the Saudis] provides any controls over their behavior,” Reed said. “What it does is involve us in activities and actions that we can’t control and we have no knowledge of and that’s not a good position for us to be.”

And questions over U.S. support of Saudi Arabia have grown with the death of Washington Post contributor Jamal Khashoggi after the Virginia resident entered the Saudi consulate in Turkey this month.

Couchman said, despite the potential shifts in power on Capitol Hill, defense issues have historically drawn a bipartisan spirit that could continue in the new session regardless of who’s in charge.

But defense priorities will be set by the party in charge, nevertheless, he said.

“It depends on who thinks they have leverage. We will see where the political stars are aligned,” Couchman said. “Democrats seem to feel emboldened. But if Democrats don’t do as well as they think they will, that reduces their negotiating leverage. If Republicans do well, it bolsters them. Whoever does well has the upper hand in the negotiations.”