Demining of Bagram goes to the dogs 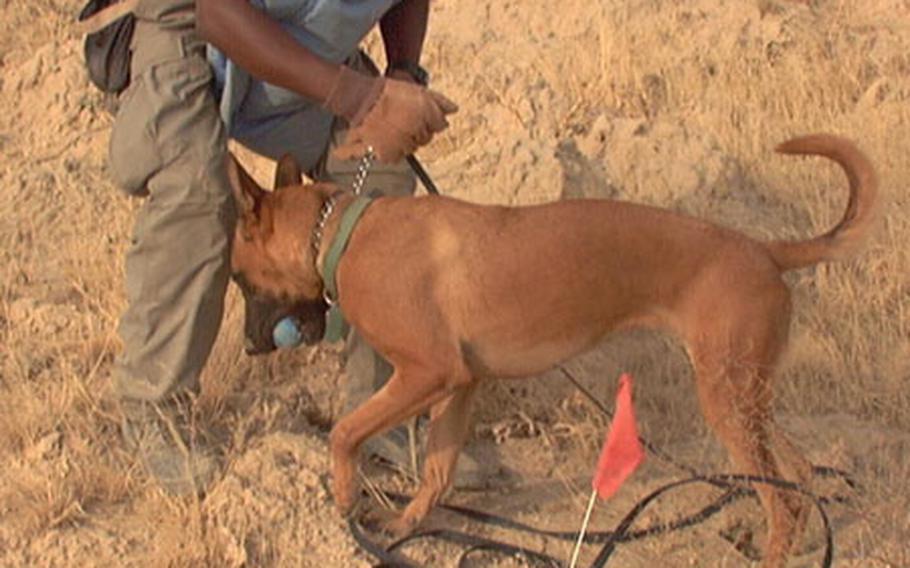 Good dog! Dog handler Orlando Vinho rewards Terra with a hard rubber ball and some play time after she located a buried training mine near the airfield at Bagram Air Base Saturday. The dogs get only a few minutes of playtime to make the reward more valuable to them and encourage them to locate more mines, according to dog trainer Johnny Wade. (Rick Emert / S&S)

Good dog! Dog handler Orlando Vinho rewards Terra with a hard rubber ball and some play time after she located a buried training mine near the airfield at Bagram Air Base Saturday. The dogs get only a few minutes of playtime to make the reward more valuable to them and encourage them to locate more mines, according to dog trainer Johnny Wade. (Rick Emert / S&S) 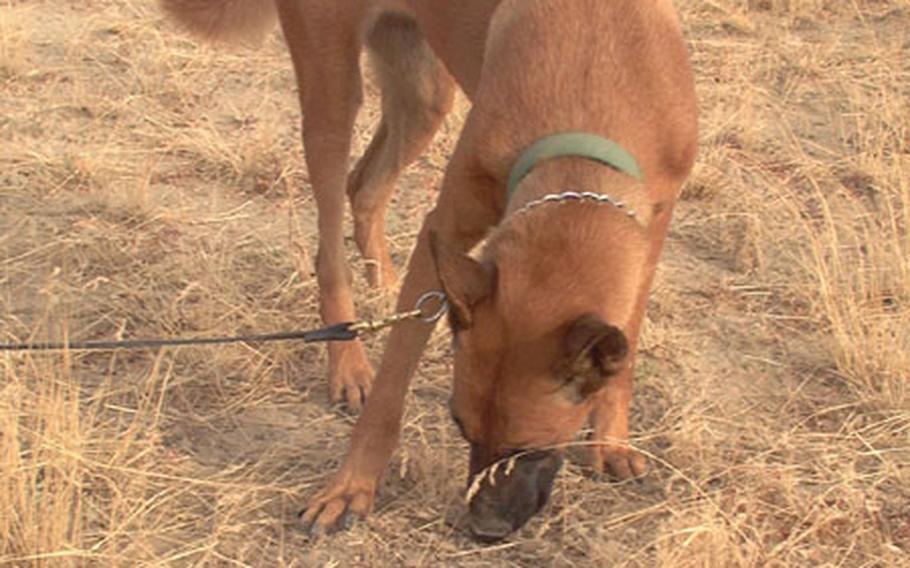 Terra, who is new to the demining mission, sniffs out land mines Saturday in a safe area used for training the dogs. Actual mines, modified not to explode, are buried for the dogs to find. (Rick Emert / S&S) 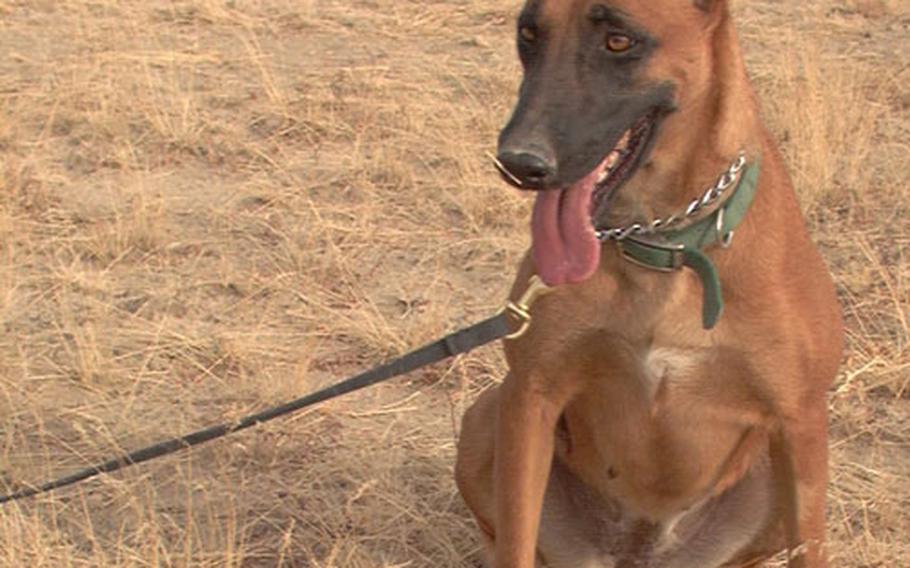 Terra sits in front of a buried training mine that she located on Saturday. The demining dogs are trained to sit between their handler and any mine they find. (Rick Emert / S&S) 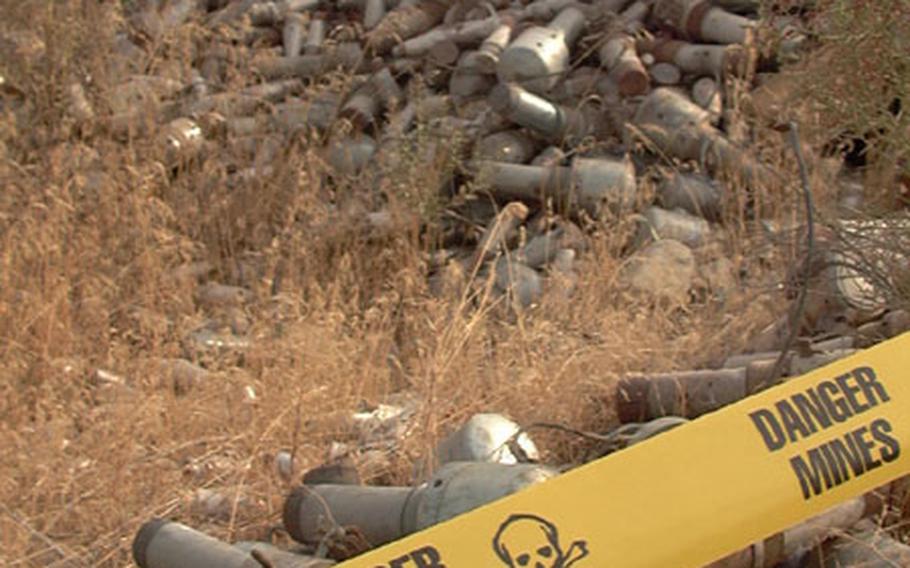 A pile of bomb fuses in a field on Bagram Air Base is marked off by yellow warning tape by explosiveive ordnance disposal teams after the area was cleared by demining dogs. (Rick Emert / S&S)

Twenty-one German shepherds and Belgian Malinois have been contracted through RONCO Consulting Corp. and the Global Training Academy to sniff out land mines in the vast fields surrounding Bagram air base.

In return for this dangerous duty, they get what any dog would want &#8212; a ball to play with and some kind words and affection from their handlers.

And, although the dogs may not know it, they&#8217;ve earned something else from lead trainer Johnny Wade &#8212; confidence in their work and pride in their achievements.

Once the dogs have cleared an area, their handlers and trainers walk through it with confidence, even though others may carefully step into their footprints.

Before starting any actual demining work, the dogs go through six months of training at the academy and two additional months of training on site. Because of their extensive training and success rate, Wade is quick to point out that these are no regular bomb-sniffing dogs.

Although they normally have a nearly 100 percent success rate, one dog was killed by a mine earlier this year &#8212; the first since Wade became a trainer seven years ago. The handler was not injured.

Wade can spout off the dogs&#8217; names and ages as if they were his own children, such as Terra, a 2-year-old who is new to the mission, or Kimba, a 10-year-old seasoned veteran.

But handlers must have an even closer relationship to the dog.

In that situation, Wade says the dogs usually adjust to the change more quickly than the handler.

While these four-legged deminers are friendly like other dogs, they&#8217;re also hard workers who get results.

In the past four months, the crews have turned up between 5,000 and 10,000 pieces of unexploded ordnance, said Joel Murray, project manager for RONCO.

However, Murray didn&#8217;t have figures on the numbers of land mines found since operations began last year, he said.

The area covered by the dogs each day ranges between 1,000 and 7,000 square meters depending on the terrain, wind and weather, he said. Because of the extreme weather in Afghanistan, the dogs work only a few hours a day to avoid heat or cold injuries, Wade added.

Global Training Academy dogs have been used in 30 countries, such as Bosnia and Herzegovina. They also have been used in Kosovo. In fact, many of the dog handlers working at Bagram are Bosnian, with others coming from Mozambique, Murray said.

Before the dogs put their noses to the ground, their two-legged counterparts conduct surveys to determine which areas are likely to have mines. In Afghanistan, this includes an initial survey based on old Soviet mine records, according to Murray. The crews also look for old tanks or fighting positions, since mines are traditionally placed around those as defensive measures, he said.

Once an area has been marked for the dogs to search, they work in segments of about 18 inches wide and up to about 30 feet long &#8212; which is the full length of the dog&#8217;s leash, Murray said. The dogs normally search a 30-foot square, Wade said.

If a dog locates a mine, he sits in front of it, blocking the handler from the mine, Wade said.

The handler then marks the area where he is standing, and annotates the distance from him to the mine for explosive ordnance disposal personnel to take care of the mine later, Wade said. For a reward, the dog gets to play with a hard rubber ball for a few minutes. Too long and the reward loses its value, Wade said.

After a dog has covered the entire area, a second dog and handler cover the same area, for added certainty that there are no mines.

&#8220;After two of our dogs have gone over an area, [RONCO] guarantees with 99.6 percent certainty that there are no mines in the area,&#8221; said Wade, who has nearly four decades of EOD experience.