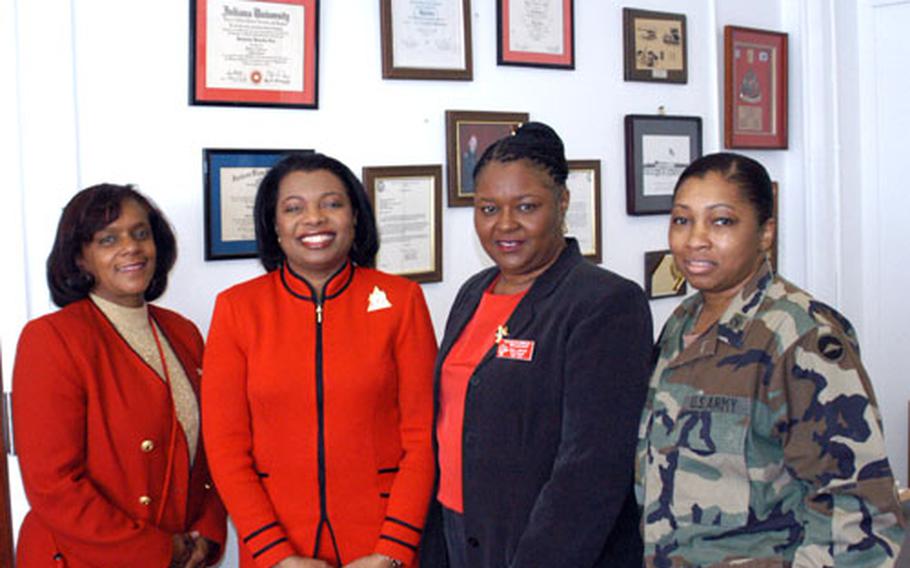 CAMP ZAMA, Japan &#8212; An organization of prominent African-American and minority women that promotes education, economic advancement and civil responsibility may not immediately seem a strong fit for military collaboration.

But the Delta Sigma Theta sorority has an unusual military connection that extends back through the 20th century, and an objective to impact military communities.

&#8220;We have a lot of collaborative partnerships with members who are in the military,&#8221; said Dr. Thelma Day, Far West regional director.

&#8220;There is no direct relationship between the two. However, you will find a Delta chapter close to almost every Army installation,&#8221; said Army Maj. Jacqueline B. Lett at Camp Zama, a member.

The reasons vary. Many sorority members are in service-related fields, a natural fit for those in military service. Some joined while in college, before becoming officers. Others, like Lett, joined alumnae chapters after reaching new duty stations.

&#8220;We know that we will have a smile and support as we in-process to a new duty station,&#8221; Lett said. &#8220;The same goes with other professionals that are members. DODEA teachers, school administrators, Department of the Army civilians, dependent spouses and many other professionals make up membership in chapters&#8221; in Japan, Okinawa and Seoul.

Day visited Tokyo and Okinawa this month to meet members, called sorors. She continued on to Okinawa to lead a retreat.

Twenty-two women at Howard University founded Delta Theta Sigma in 1913 to use their collective voice to enact change, the organization says. They strived to support the disadvantaged, provide education and to help build positive public policy to solve community problems.

The sorority now has 250,000 members in either college or alumnae chapters like those in Japan, Okinawa and South Korea.

They supported World War I efforts before many women of any race were in military ranks. And Delta Hazel Johnson Brown, a Ph.D. and a brigadier general, was the Army&#8217;s first African-American female general.

&#8220;We are part of the silent, nonprofit volunteer support in the military community,&#8221; Lett said. &#8220;We are quite often called upon to lend support to various projects of the military and local host nation communities. Whether it is monetary, physical skills or mental input, we serve.&#8221;

Starting last year, that support also became more visible: Delta was granted a seat on one of the United Nations advisory panels.

The sorority offers its own members support and networking opportunities. Since Sept. 11, 2001, the sorority has worked to honor its members in uniform. A Delta was among those killed at the Pentagon.

&#8220;We hope to continue to foster the relationship we have with the military sorors. There are a lot of opportunities for us to continue this great partnership,&#8221; Day said.

With its U.N. affiliation &#8212; the group holds a nongovernmental organization status &#8212; the sorority is in a stronger position to influence global affairs, Day said. But she envisions no conflict between that role and Delta&#8217;s support of its military members, she said.

&#8220;As an organization we would respect what the military is doing,&#8221; she said. &#8220;There would be no reason or need for us to do anything counter&#8221; to that. &#8220;We hope to use the opportunity to encourage recommendations and suggestions from all of our chapters to make a difference in the U.N. It is great to have the opportunity to recommend policy changes &#8212; at that level, especially.&#8221;

The group will hold a national meeting next month to discuss issues that could be brought to the United Nations, particularly related to global health.