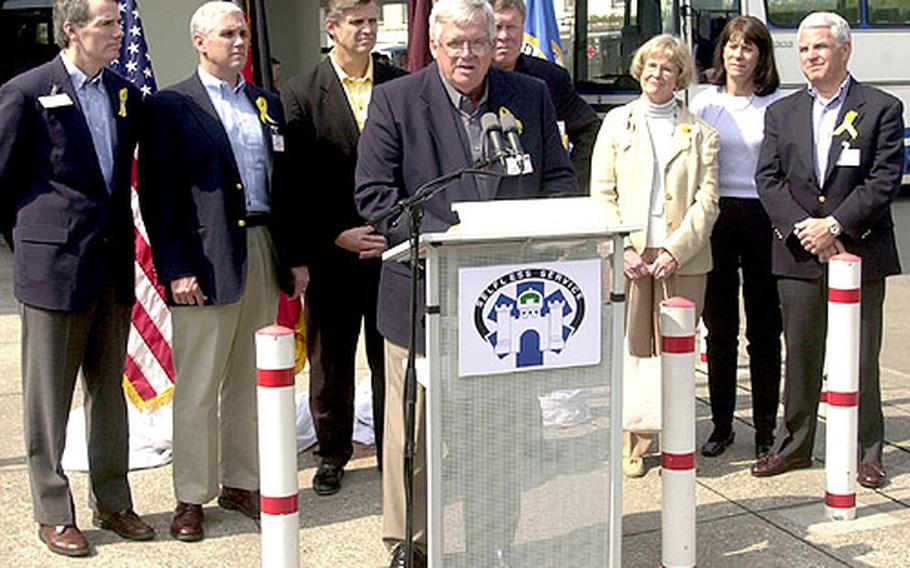 Speaker of the House Dennis Hastert is joined by other members of Congress as he speaks to the media outside Landstuhl Regional Medical Center on Monday. (Raymond T. Conway / S&S)

Hastert, a Republican from Illinois, said the delegation was there to thank the wounded troops, who he said were doing a &#8220;great deed for our country and making sacrifices so our country can remain free.&#8221;

The representatives gave the troops U.S. flags that had flown over the Capitol, as well as phone calling cards, snacks and free domestic airline tickets.

Hastert noted that the congressional members all had seen the damage done to the Pentagon and the World Trade Center during the Sept. 11 terrorist attack.

&#8220;The Congress made a commitment at that point that we weren&#8217;t going to let that happen in the United States of America again,&#8221; Hastert said.

Among the troops meeting the representatives was Seaman Ted Bittle, a Navy hospital corpsman who was wounded when an Iraqi detonated a vest filled with explosives at a Marine checkpoint near Baghdad.

The explosion destroyed the orbital bones around Bittle&#8217;s right eye, causing him to lose his sight in that eye and all the feeling on the right side of his face. Shrapnel tore through his wrist and ball bearings from the suicide vest are still in Bittle&#8217;s right arm.

The congressional delegation included: Judy Biggert of Illinois; Anne Northup of Kentucky; Michael Pence of Indiana; Robert Portman of Ohio; John Shadegg of Arizona; William Tiahrt of Kansas; and Norman Dicks of Washington, who was the only Democrat on the trip.

They arrived at Ramstein Air Base on Monday from Washington. They met first with Gen. Gregory S. Martin, U.S. Air Forces in Europe commander, and planned to eat lunch with Ramstein airmen after the hospital visit.

On Tuesday, they were to meet with U.S. European Command leaders in Stuttgart.

They also planned to visit RAF Fairford in the United Kingdom, from which B-52 bombers staged their attacks on Iraq.

The group will then will fly to Cyprus, where they will catch a ride to an aircraft carrier, hospital spokesman Capt. Norris Jones said. Jones said the carrier&#8217;s name was being withheld until the representatives are aboard.

The hospital at Landstuhl has treated 665 patients from Operation Iraqi Freedom in the last 30 days, spokeswoman Marie Shaw said. Of those, 258 were wounded in battle. Another 61 patients were expected to arrive at the hospital late Monday, she said.