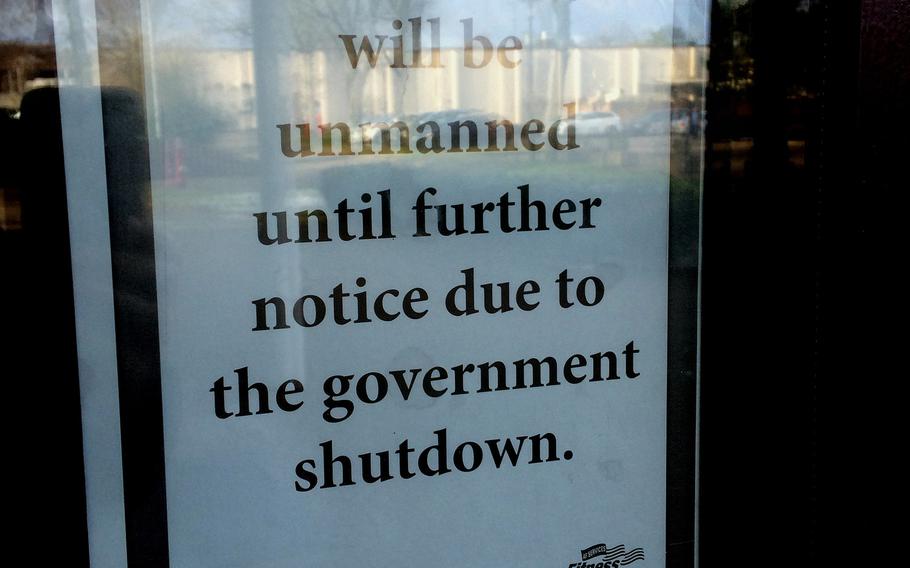 Buy Photo
Some facilities on Vogelweh were closed or unmanned on Monday, Jan. 22, 2018, due to the government shutdown. (Jennifer Svan/Stars and Stripes)

Buy Photo
Some facilities on Vogelweh were closed or unmanned on Monday, Jan. 22, 2018, due to the government shutdown. (Jennifer Svan/Stars and Stripes) 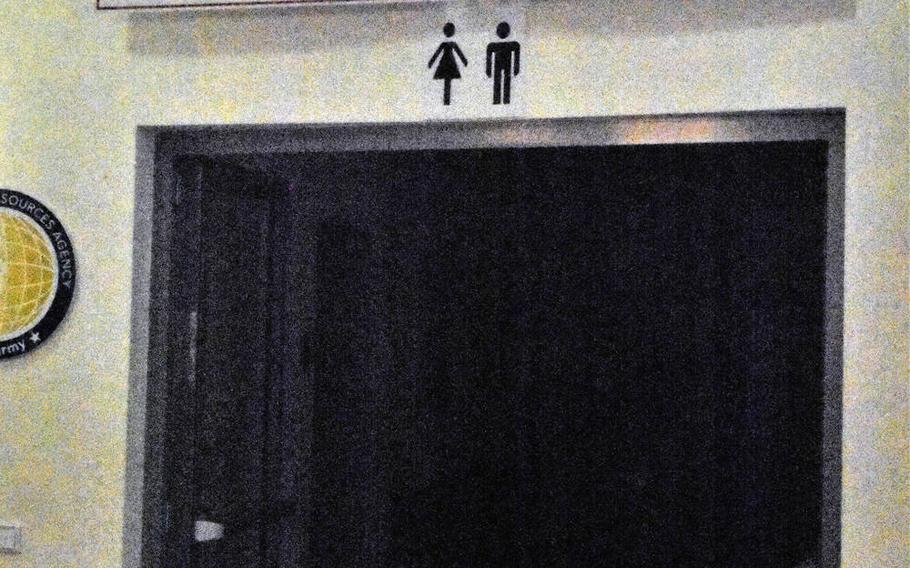 Buy Photo
A darkened hallway to several programs at Grafewoehr, Germany, that were closed because of the U.S. government shutdown, Monday, Jan. 22, 2018. (Martin Egnash/Stars and Stripes ) Buy Photo
The headquarters building of U.S. Army Garrison Bavaria, Grafenwoehr, Germany, where several service were closed because of the shutdown of the federal government, Monday, Jan. 22, 2018. (Martin Egnash/Stars and Stripes ) 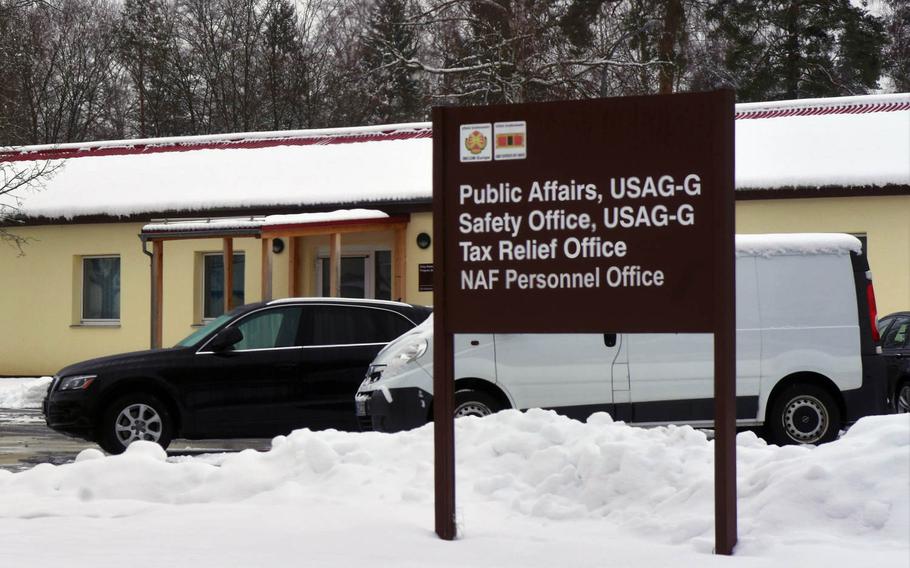 Buy Photo
The Public Affairs Office at Grafenwoehr, Germany, was closed on Monday, Jan. 22, 2018, because of the U.S. government shutdown. (Martin Egnash/Stars and Stripes ) Buy Photo
A fast food location at Ramstein Air Base in Germany lets customers know they're open on Monday, Jan. 22, 2018, despite the federal government shutdown. The shutdown has delayed or cancelled some services at overseas military bases. (Ann Pinson/Stars and Stripes)

The furloughs — expected to include more than 50 percent of DoD’s roughly 742,000 civilian personnel — mean that some base services and activities will be curtailed or cancelled until Congress and the White House can come to an agreement on federal spending.

Essential services like schools, overseas commissaries and mental health counseling will remain open, as will revenue-generating services like base exchanges and other non-appropriated fund programs.

However, services at housing offices, libraries and other offices will be delayed or closed at various bases due to staffing shortages. Extracurricular activities and high school sports have been cancelled, though some practices remain scheduled.

Hospitals and clinics remain open, although some have not confirmed appointments beyond this week.

Temporary duty official travel is being curtailed and scheduling changes between duty stations will also be delayed in some areas.

Thus far, most servicemembers who spoke with Stars and Stripes said they haven’t been severely impacted but are watching developments closely.

“Being in the military it hasn’t affected us personally,” Navy Petty Officer 1st Class April Watson, 40, of Brooklyn, NY, said at Yongsan Garrison in Seoul, South Korea. “You still have to continue to work ... whether we’re caught in the middle or not I still have to perform and serve regardless if I’m getting a paycheck or not because this is something that I signed up for.”

The shutdown could affect readiness if it goes on for a long time, she said.

“When we have pay affected a lot of things deteriorate as far as our morale. Those who are forward (deployed), if their finances are not good their potential to be ready to fight may go down because they’re concerned about their families back at home and how they’re going to survive.”

Military paychecks are guaranteed through Feb. 1; continuing pay beyond that point will require congressional action. Air Force Federal Credit Union, First Command Financial Services, Navy Federal Credit Union, Service Credit Union and USAA, all of which serve military members and their families, have each offered zero percent loans and other options for those who may be adversely affected.

Civilians in South Korea are required to work, but it’s unknown when they’ll get paid.

Elsewhere, many civilians reported to work on Monday, only to be sent home.

In the Asia-Pacific Yokota Air Base officials posted a note on the base Facebook page stating that the dining facility, fitness and childcare centers, personnel, housing offices and the Red Cross were open and that buses were running on schedule, before snow forced an early closure of most facilities.

Some programs and classes won’t be available at Yokosuka Naval Base during the shutdown but counseling services such as SAPR (Sexual Assault Prevention and Response) and Family Advocacy services will operate as normal, the website stated.

“Housing Service Centers will operate normal hours but will only be staffed with local national personnel so there may be a delay in receiving services,” the website said.

Robert Haynes, a spokesman for U.S. Army Garrison Japan, said officials were still determining how the shutdown might impact services at Camp Zama in Kanagawa Prefecture near Tokyo.

In a post on Misawa Air Base’s Facebook page, officials said all military and civilian personnel were expected to report to work as usual to receive guidance from base leadership.

However, the Marine Corps Air Station Iwakuni website said the base library, new parent support program, and all teen and youth center activities were closed until further notice.

Sgt. Harris Cooper, 29, Fairfield, Conn., based at Daegu but at Yongsan for a meeting, said he’d survive the shut down even if his pay didn’t come through on time.

“I’m not living paycheck to paycheck,” he said.

But he said it was extra stress, especially for deployed troops.

Cooper said he hoped the lawmakers would compromise before the military was seriously impacted.

“If this is a prolonged thing then maybe it’s going to affect readiness over time,” he said.

On Guam, Join Region Marianas held a town hall meeting and told residents to expect delays to non-essential services. Housing assignments and routine processing will be affected by the shutdown, a region spokesman said in an email to Stars and Stripes. Routine facility repairs will be limited and emergency repairs may be delayed, the spokesman added.

1st Lt. Edward Pingel, a Marine Corps Installations Pacific spokesman said by email that government services on Okinawa would be limited but that on-base gyms, libraries, clubs and restaurants would remain open.

In Europe, Africa and elsewhere In Naples, Italy, Alli Darne, 21, an E-4 sailor’s spouse, learned Monday that the counselors helping them cope with recent hardships were furloughed, which she said will cause a setback in their treatments.

Darne said she is concerned about losing pay for an indefinite period and about the “mixed messages and misinformation flying around in panic on social media” about the shutdown’s effects.

Still, she believes the shutdown is part of democracy, with each political faction battling for the voters they represent.

“That’s actually what our military is fighting for,” Darne said. “This is another sacrifice we have to make for people to feel heard and for our government to do its job, so we’ve made peace with it and we’ll make do.”

Sgt. Yakkia Davis, a funds technician with the base chapel at the U.S. Army base in Grafenwoehr, Germany, said many of her civilian coworkers will not be working until the shutdown is settled, which makes the workload harder on the soldiers.

“When we hire new contractors, they have to go through background checks and other processes that my civilian coworkers do, and now they aren’t here to do that,” Davis said.

Meanwhile, more than 200 U.S. Army Africa personnel, about 30 percent of the command’s workforce, are receiving furloughs. Military personnel will continue to work and accrue pay, but won’t receive it until money is appropriated, the command said in a statement Monday.

All Department of Defense Education Activity-Europe high school sports are cancelled, including practices, until the shutdown is over, DODEA-Europe athletic director Kathlene Clemmons said in a statement Monday. The suspension of activities comes as European championship events are set to begin Feb. 3.

• At Ramstein Air Base in Germany, education counseling is unavailable and tuition assistance will have reduced services and no new appointments, but college classes will continue as scheduled.

Additionally, at Ramstein, promotion testing has been postponed; the manpower flight will have reduced services; child and youth services instructional programs are cancelled and the Airman and Family Readiness section will offer reduced services. The library will be open from 10 a.m. to 4 p.m. weekdays, while the Vogelweh library will be closed indefinitely. For more information, check the 86fss.com website.

• In Wiesbaden, home to U.S. Army Europe headquarters, many Army Community Service programs have been affected, including employment readiness, financial readiness, Family Readiness Group support, and master resiliency training. Other closed resources include in- and out-processing, the Army Substance Abuse Program, passport office and retiree services, while more than a dozen other resources are operating with limited service, according to a Facebook posting by the garrison Public Affairs Office. Fewer than 70 garrison and IMCOM-E employees have been furloughed there, according to garrison officials.

• At Landstuhl Regional Medical Center, most patient services will remain open. Appointments made before Friday and scheduled through Jan. 26 “should still be honored, although some services like elective surgeries may be curtailed,” the hospital said in a statement. The hospital will contact any patients whose appointment are cancelled, if necessary.

• USAG Italy called a mandatory meeting Monday afternoon for Defense Department civilians and Italian workers to discuss the shutdown's impact. Stars and Stripes was barred from attending the meeting.

Officials said that the garrison could blunt the impact of the shutdown on services by shifting Italian workers and non-furloughed workers to critical customer service areas, such as passport services.

Garrison officials said that updates would be posted on the garrison's Facebook page.

Meanwhile, Vicenza medical personnel said in a statement that the shutdown would "have very little immediate impact on Public Health Command Europe’s ability to perform its mission.”

• Most services at bases in Afghanistan continued operating normally.