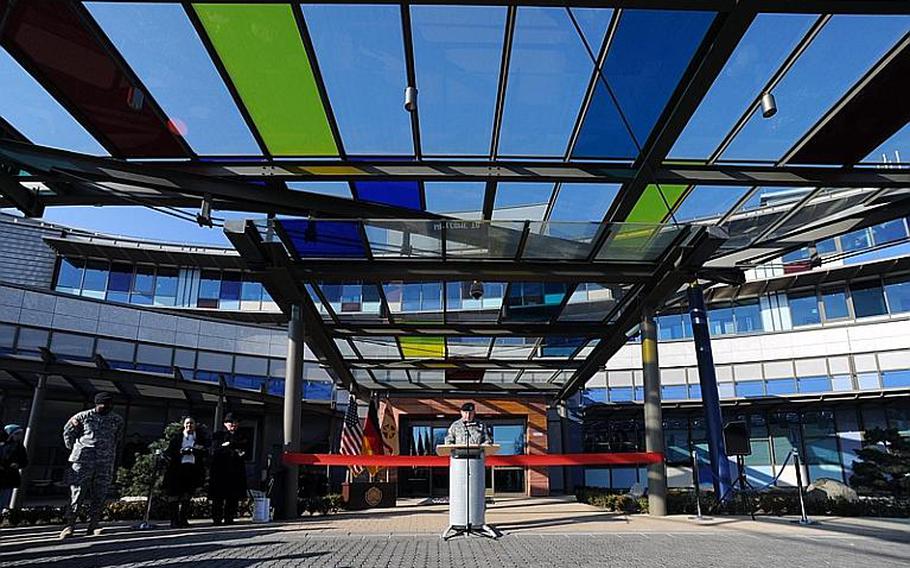 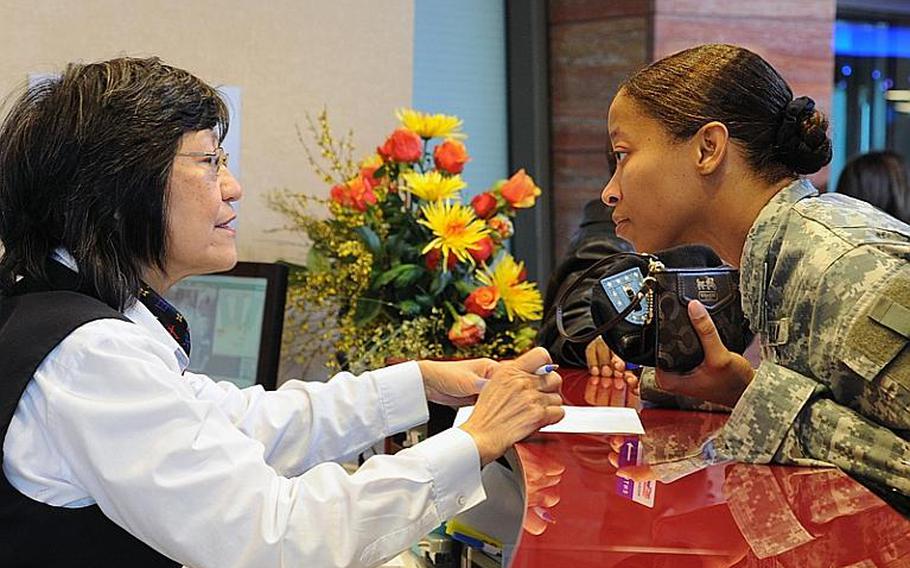 Buy Photo
Nora Nishimura, left, a guest services representative at the new Army lodge in Wiesbaden, Germany, checks in Chief Warrant Officer 2 Starlet Fudge-Howze. Although guests have been staying there for a couple of weeks, the official ribbon-cutting was on Wednesday. (Michael Abrams/Stars and Stripes) 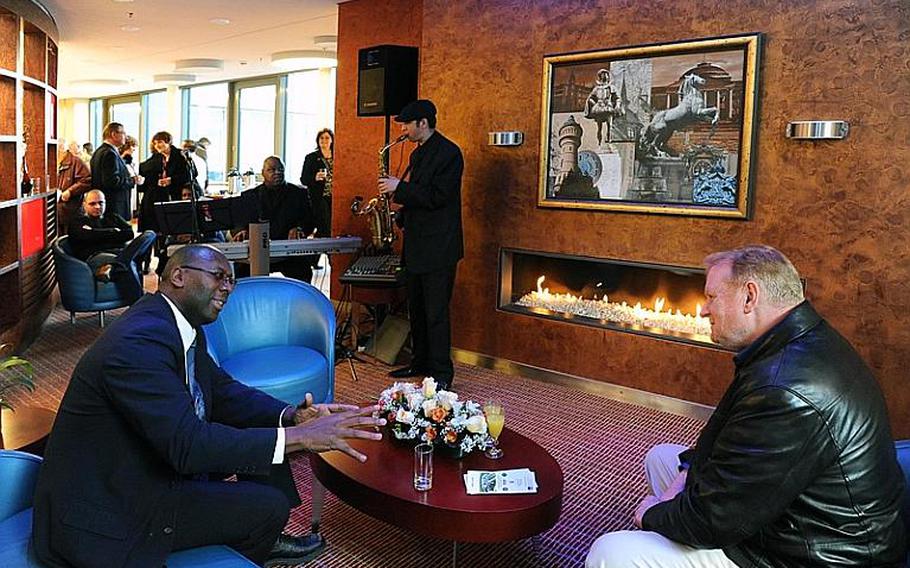 Buy Photo
Guests at the official opening of the Wiesbaden Army Lodge enjoy live music and the fireplace after the ribbon-cutting on Wednesday. (Michael Abrams/Stars and Stripes) 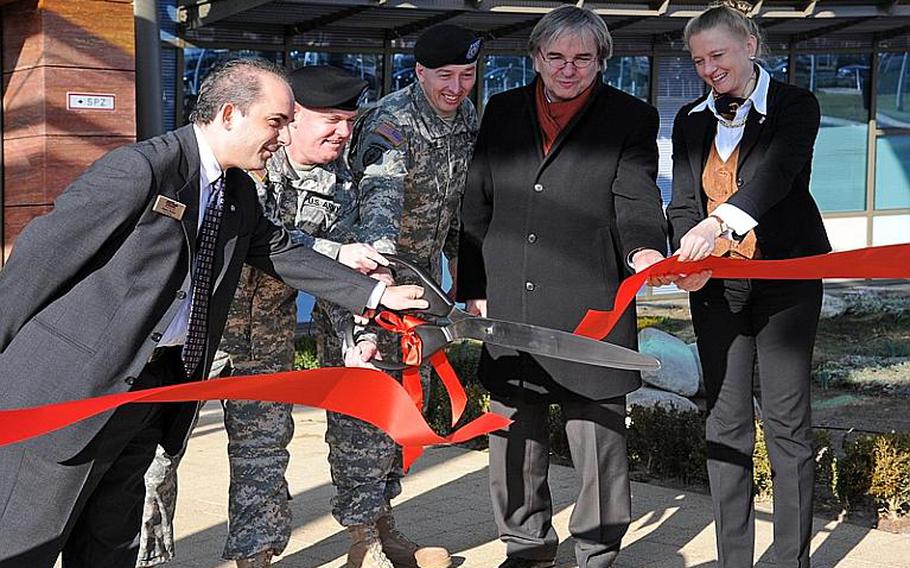 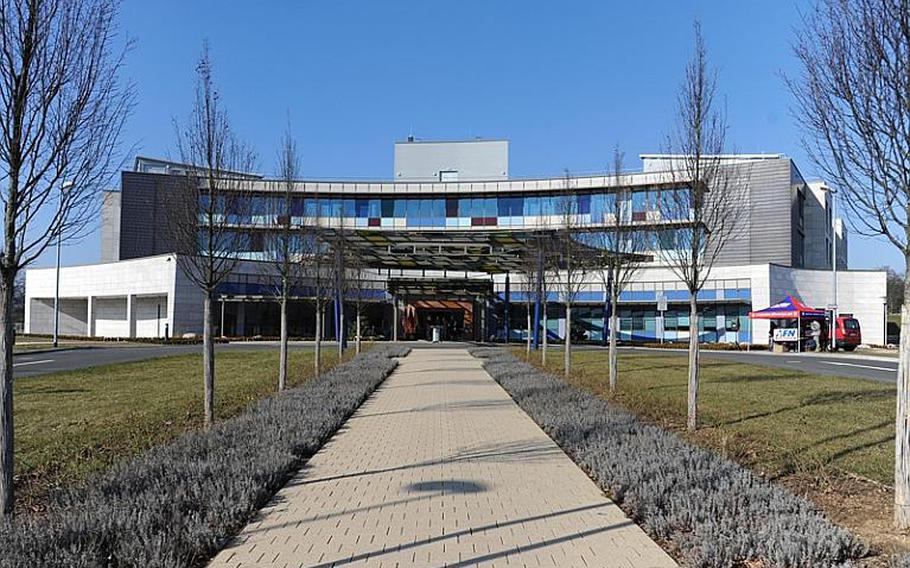 WIESBADEN, Germany &mdash; The sense of relief was evident on Col. Jeffrey W. Dill&rsquo;s face Wednesday as he used oversized scissors to cut the red ribbon in front of the Wiesbaden Army Lodge.

&ldquo;It&rsquo;s both relief and excitement,&rdquo; Dill, the U.S. Army Garrison Wiesbaden commander, said after the ceremony at the Hainerberg housing area to officially open the 164-room lodge.

Construction defects and delays, including a water leak on the top floor of the partially completed structure that affected much of the building, pushed the $32 million projected cost to a final tally of $36 million. Construction began in 2007 and the hotel was originally scheduled to open in late 2009.

Now, folks arriving at or departing from the Wiesbaden military community have a state-of-the-art hotel where they can stay.

The lodge has 92 family rooms, 64 standard rooms and eight extended-stay units. Among the lodge&rsquo;s features are kitchenettes, free Internet in every room and in-room flat-screen televisions with AFN and German programming. It also has a fitness room, free guest laundry machines on each floor and a dog walk for families arriving with hound in tow.

The lodge in the Hainerberg housing area replaces the aging American Arms hotel. The downtown lodge was closed in February, although some offices for the Department of Defense Dependents Schools Europe are still there. The American Arms will be turned over to the German government, but no date has been set.

Wednesday&rsquo;s grand opening was in name only; guests began staying at the new facility on a test basis in late January.

&ldquo;The rooms are beautiful,&rdquo; said Tatiana Von Tauber, who has been staying at the hotel with her husband and three children since its opening.

Her 13-year-old daughter, Milla, was a little more critical. &ldquo;The breakfast isn&rsquo;t all that great,&rdquo; she said.

Although the lodge is open, residents won&rsquo;t get a reprieve from cranes and construction crews anytime soon. The hotel is just one part of a $600 million overhaul of Wiesbaden&rsquo;s military communities in preparation for the arrival of the U.S. Army Europe&rsquo;s headquarters.

USAREUR&rsquo;s move is projected to boost Wiesbaden&rsquo;s military population from about 16,500 servicemembers, civilians, retirees and family members to 20,000 by 2015.