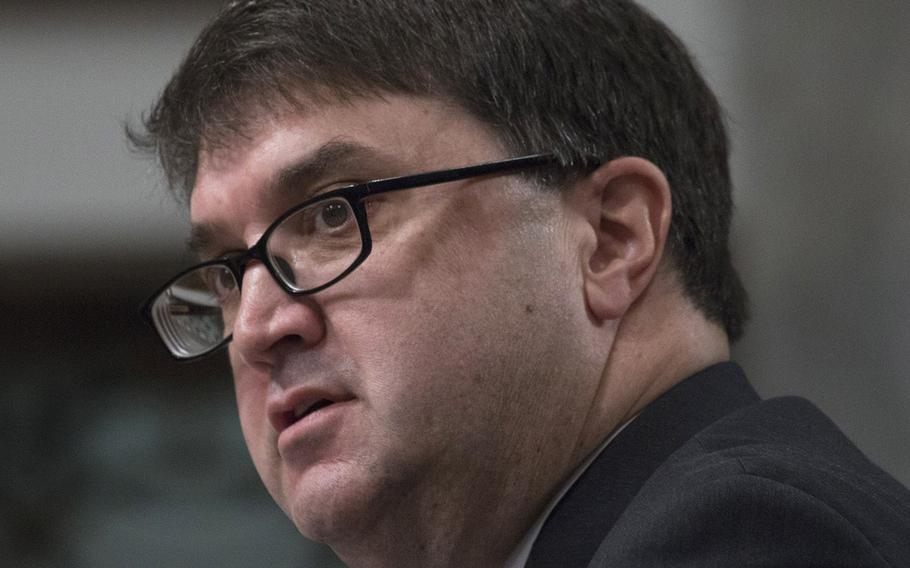 Robert L. Wilkie, nominee to be Under Secretary of Defense for Personnel and Readiness, listens during a Senate Armed Services Committee hearing on Capitol Hill, Nov. 2, 2017. ( Joe Gromelski/Stars and Stripes) 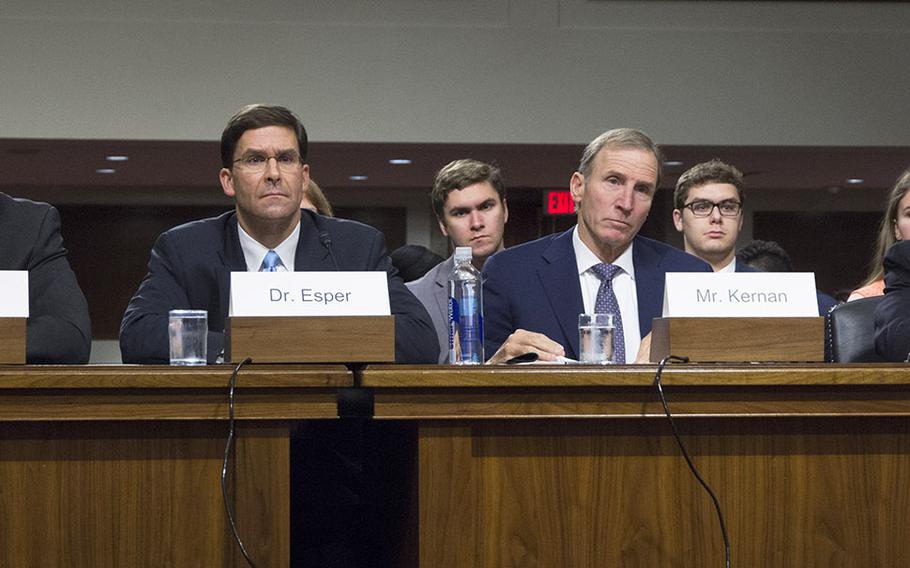 WASHINGTON — In another sign of increasing cooperation between congressional defense hawks and the Pentagon, a key senate panel is poised to finally move forward on several of President Donald Trump’s nominations for top military leadership posts.

The nominations were initially held up over concerns the Trump administration was pushing for too many defense industry executives for top Pentagon posts, such as in Esper’s case, said Sen. John McCain, R-Ariz., chairman of the Armed Services Committee.

Esper, for his part, has committed to recusing himself from Raytheon-related matters and submitted a letter to that effect, McCain said. Esper reportedly drew a total annual compensation of $1.5 million from his recent work for Raytheon Co., one of the country’s largest defense contractors.

McCain signaled that under his watch, Esper would be among the last ex-defense executives to make it through the Pentagon nomination process.

“I would be remiss if I did not reiterate my concerns about the number of nominees from defense industry filling out the leadership ranks at the Department of Defense,” McCain told Esper during Thursday’s hearing. “My reservations grew out of early consultations I had with the [Trump] administration about potential nominees, including yours and a handful of others. It was then that I decided I couldn’t support further nominees with that background.”

Those concerns were compounded in recent months by a rising conflict between defense hawks and top Trump defense officials over a lack of transparency over a slew of issues. McCain had confirmed he was holding Pentagon nominations hostage as a result of the disconnect.

McCain railed that the officials, including Defense Secretary Jim Mattis, a longtime friend, were not being forthcoming with information on two deadly Navy ship collisions during the summer, a change in war strategy under loosened rules of engagement and the deadly Niger ambush last month.

But in a recent turn of events with several hearings on those matters and a personal visit from Mattis on Capitol Hill last month, McCain said he and other Armed Services Committee members were pleased with the new level of cooperation from the Pentagon and would lift the holds.

“The reason these nominations have not been acted on as rapidly as possible is because failures of communication between this committee and the Pentagon, which is a shame, since I have known them for many, many years,” McCain said. But “we intend to move your nominations through as soon as possible. We need you to get to work.”

But McCain warned the crop of potential new Pentagon officials that they will be committed to an open mode of communication. The nominees could get approved as early as Friday.

“We expect from you not only communication but cooperation,” McCain said. “That is something that is our constitutional responsibility. I hope that you appreciate that.”

McCain said following Thursday’s hearing that his committee is moving forward with a backlog of nominations in a signal of improved cooperation with the Pentagon.

“We are moving forward with the nomination process thanks to the negotiations and communications with Secretary Mattis,” he said. “We have resolved our differences.”

McCain said there is “totally” apparent cooperation between his panel and the Pentagon.

“It took a little incentive to get that,” he said.