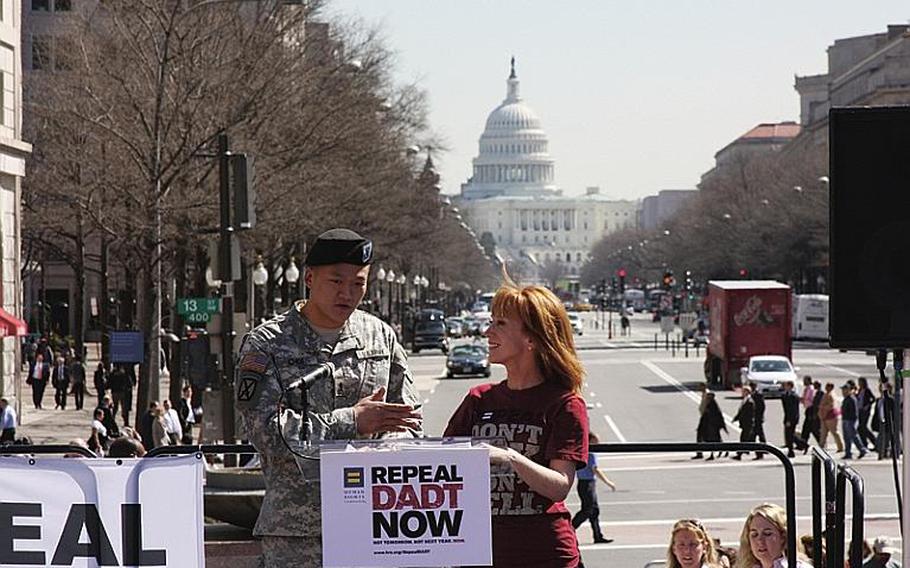 Comedian Kathy Griffin and Army Lt. Dan Choi, an openly gay soldier who has yet to be formally discharged, attend a rally in Washington in March calling for the repeal of the military's 'don't ask, don't tell' law. (Leo Shane III / Stars and Stripe)

WASHINGTON &mdash; While gay rights advocates are celebrating this week&rsquo;s votes in Congress to overturn the &ldquo;don&rsquo;t ask, don&rsquo;t tell&rdquo; law, they&rsquo;re also warning closeted servicemembers not to reveal anything just yet.

Proposals passed in the Senate Armed Services Committee and House on Thursday would mandate a repeal of the 1993 law banning openly gay troops from serving, but only after a lengthy review process. The earliest a full repeal could go into effect would be late January 2011.

That prompted the Servicemembers Legal Defense Network to issue a warning to any homosexuals serving silently that &ldquo;it is not safe to come out or serve openly&rdquo; until the repeal is finalized.

&ldquo;At a minimum, we&rsquo;re worried this is going to create confusion for these people,&rdquo; said spokesman Trevor Thomas. &ldquo;There&rsquo;s nothing in these votes that stops the law from being enforced at this time.&rdquo;

In a statement Friday on the Pentagon Channel, Defense Secretary Robert Gates said he doesn&rsquo;t expect a clear timetable on a repeal to develop until the end of this year.

&ldquo;While this policy plays out over time, nothing will change in our current policies and practices,&rdquo; he said. &ldquo;Current law, policies and regulations remain in place, and we&rsquo;re obligated to follow them as before.&rdquo;

A gay specialist currently in Iraq on his second deployment, who asked that his name be withheld for fear of reprisal, said the repeal vote was exciting news but still does not know what it means for his continued service. The soldier has been under investigation since April after another servicemember outed him to his command. He was informed of the inquiry a day after Gates announced the military would not pursue new cases in which a servicemember was outed by another person.

&ldquo;I was told they would gather the documents necessary and stick them in a folder in a desk, for now,&rdquo; the specialist said.

His lawyer, with the Servicemembers Legal Defense Network, has advised him that he should consider his investigation still active.

For now, he is still assigned to the same job he held before the investigation started. The soldier said his unit is shorthanded, and his commander said the Army couldn&rsquo;t afford to lose him. But he worries that will change when his unit returns home soon.

&ldquo;They hold all the power and it makes an individual anxious,&rdquo; he said.

Alexander Nicholson, executive director of the pro-repeal group Servicemembers United, acknowledged that for practical and legal purposes gay troops should keep acting as if there has not been any change.

&ldquo;But of course I think this will have a palpable effect in the climate in the services,&rdquo; he said. &ldquo;I can&rsquo;t imagine, with a repeal pending, that the tone towards gays and lesbians is going to be as hostile as it has been.&rdquo;

Nicholson was optimistic that recent developments will send a message to commanders not to aggressively pursue cases against servicemembers suspected to be gay.

&ldquo;I honestly believe a lot of these pending cases will be tied up by administrative issues,&rdquo; he said. &ldquo;Because it&rsquo;s going to look bad if they go ahead with them, right before the law is repealed.&rdquo;

Nearly 14,000 servicemembers have been booted from the military under the &ldquo;don&rsquo;t ask, don&rsquo;t tell&rdquo; law since its adoption in 1993. Preliminary legislation dealing with the repeal included language which would have allowed any individual dismissed under the law to reapply for service without any legal roadblocks. That language was not included in the measures passed this week, leaving it unclear what options already-ousted servicemembers might have.