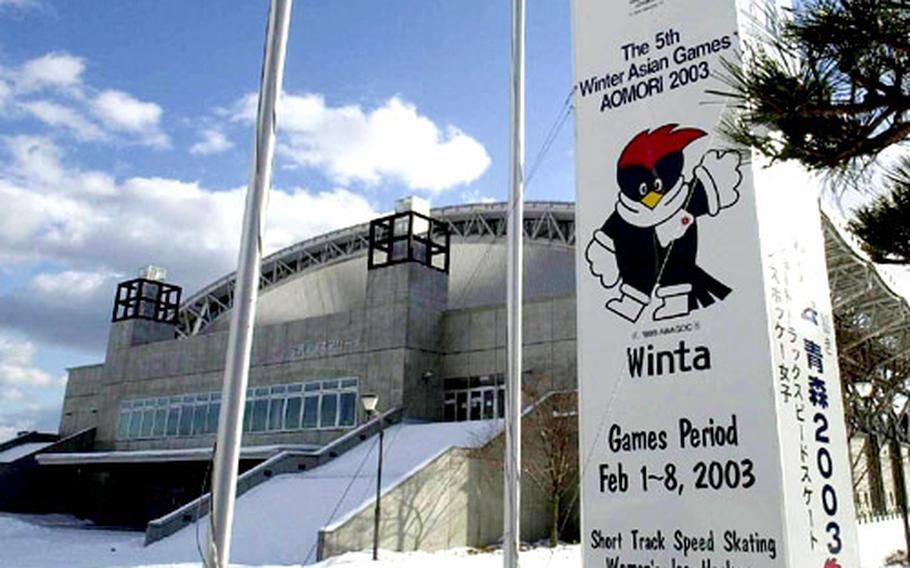 Women&#39;s ice hockey, and men&#39;s and women&#39;s short track speed skating events for the 5th Asian Winter Games will be held at the Misawa Ice Arena, a 10-minute drive from Misawa Air Base in northern Honshu. (Wayne Specht / S&S)

The winter equivalent to last autumn&#8217;s Asian Games held in South Korea, the games are set for six venues, including several events in an ice arena near Misawa Air Base.

But several North Korean teams had yet to confirm their entry as of Tuesday &#8212; and one team from that nation already has said it won&#8217;t compete.

&#8220;The North Korean Olympic Committee has entered what is called entry by number; however, they haven&#8217;t entered names of participating athletes by the Dec. 31 deadline,&#8221; Hamadate said.

North Korea notified the Aomori committee on Dec. 11 that the country&#8217;s men&#8217;s hockey team would not come to compete.

According to the Aomori Organizing Committee, more than 40 Asian nations with National Olympic Committees belong to the Olympic Council of Asia. So far, 23 member countries have confirmed they would send teams to Japan to compete.

This is two more than 1999&#8217;s Asian Games, in Kangwon, South Korea, where athletes from 21 countries competed, Hamadate said.

India is expected to send in a list of athletes, he added, bringing total participating countries to 24, not including North Korea.

Games are to run Feb. 1-8, with competitions in 54 events in six winter sports.

Athletes taking part in the Asian winter games traditionally use the event to qualify for the much larger winter Olympic Games, to be held next in 2006 in Torino, Italy.

North Korea&#8217;s women ice hockey team was expected to be a strong rival for the gold medal against the Japanese team, the Mainichi Shimbun reported.

The Aomori Organizing Committee is withholding sales of tickets for the women&#8217;s ice hockey event since match-ups have not been decided.

Women&#8217;s ice hockey events, and men&#8217;s and women&#8217;s short-track speed-skating events, are set for the Misawa Ice Arena, about a 10-minute drive from the front gate of Misawa Air Base.

Tickets for short-track speed-skating events and figure skating have been on sale since Nov. 24. Men&#8217;s ice hockey tickets go on sale Jan. 11.

Hamadate said tickets may be sold on the day of the events for an additional 500 yen at the venues.

Tickets for all outdoor events are free.

Other events to be held in the prefecture include: