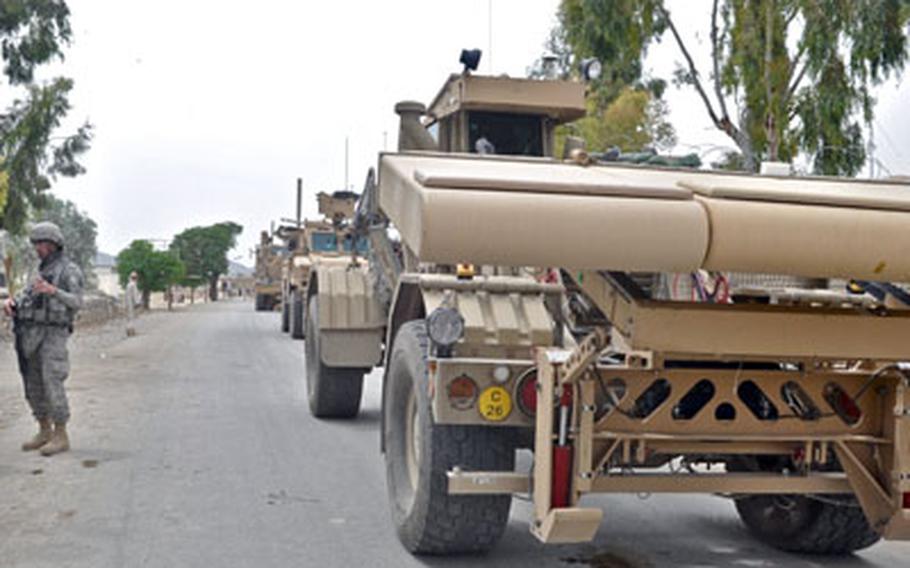 Buy Photo
The Husky vehicle, with its ground-penetrating radar, patrols the village of Yaqubi in the Sabari district of Khost province along the bomb-riddled Route Alaska on April 7. (Dianna Cahn/Stars and Stripes)

Buy Photo
The Husky vehicle, with its ground-penetrating radar, patrols the village of Yaqubi in the Sabari district of Khost province along the bomb-riddled Route Alaska on April 7. (Dianna Cahn/Stars and Stripes) 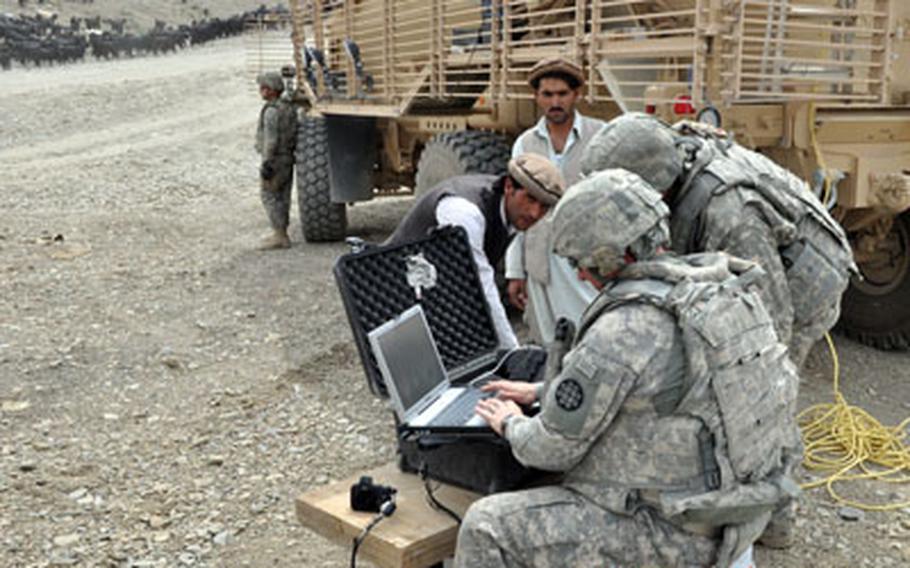 Soldiers from a route clearance unit enroll passers-by in a database system after setting up a checkpoint along Route Alaska. () 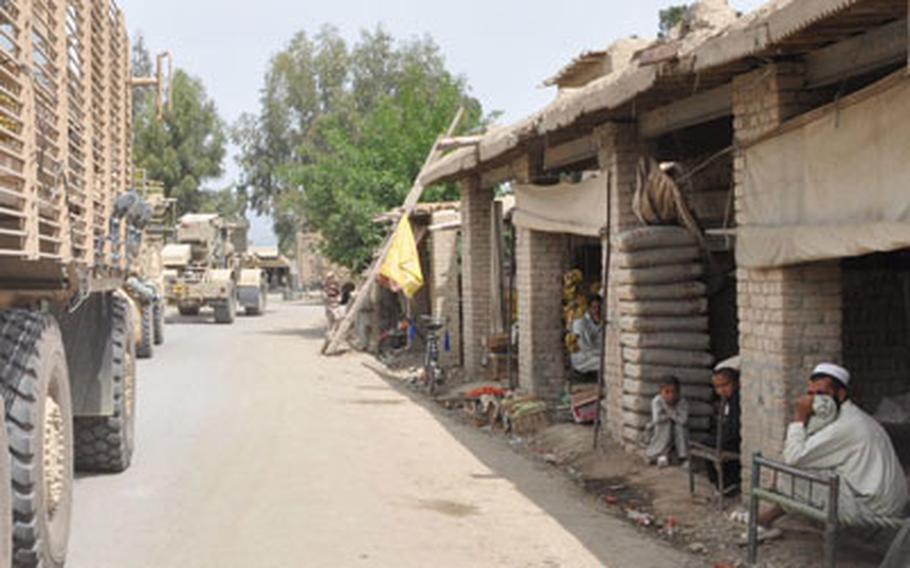 Villagers in Yaqubi look on as a route clearance patrol passes through their village in the Sabari district in eastern Khost province on April 7. The village sits along the key Route Alaska, which the route clearance units patrol regularly to rid the road of bombs. ()

KHOST, Afghanistan - The headset in their armored vehicle blared with the raging metal band Killswitch Engage while the soldiers delicately maneuvered a mechanized arm to claw at a crater in the rocky dirt road.

"Right here a bomb hit a car and blew it and the people in it to pieces," said Spc. Ernie Roberts.

A few yards up the road that traverses the green fields and bustling markets of this border province, Roberts pointed to a spot known for pressure-plate bombs, which are triggered by the weight of a vehicle. Beyond that was where he watched a man in a car pray, then detonate, lifting a nearby 50,000-pound American vehicle into the air like a feather and blowing it 30 feet from where it sat.

"This used to be the worst road pretty much in the whole country," Roberts said.

The 1141st Engineer Company, part of the 203rd Engineer Battalion of the Missouri National Guard, came into this front-line region in November when insurgent bombs along Route Alaska in the Sabari district were so prevalent the previous unit decided the best route was one less traveled. That unit cut back on vehicle convoys, lowering the rate of explosions and injuries.

Not everyone thought they were winning the battle. When his company came in, Capt. Brian Sayer was convinced that for his men to properly do their jobs they needed to be precisely where the bombs were and secure the road once and for all.

Instead of steering away from the IEDs, or improvised explosive devices, Sayer&#8217;s men began saturating the route. It put them directly into the path of enemy fire but, in their view, it allowed them to take the fight back to their attackers.

"The previous RCP (Route Clearance Package) company in conjunction with Task Force Steel (4th Brigade Combat Team, 25th Infantry Regiment) thought the less they traveled the road, the more the enemy would think it&#8217;s not that important," Sayer said. "Steel had a decrease in the number of injuries, but that didn&#8217;t get the job done."

Under traditional thinking, route clearance is done by a supporting unit whose role is to secure whatever route a convoy wants to use on a given day. The unit at Forward Operating Base Salerno was not the only one to conclude it made more sense to deny the enemy its target by reducing use of a route.

Sayer challenged the traditional view. The premise of his plan is that route clearance is not just about clearing a road long enough for a convoy to go through but rather taking charge of the terrain. Like "clear, hold and build" in the military&#8217;s counterinsurgency directive, Sayer believes route clearance must focus on long-term clearance goals.

"Most people try to avoid IEDs," he said. "My guys&#8217; job is to go find them, so avoiding them is counterproductive to our job."

Offensive route-clearing, as Sayer likes to call it, was a radical new approach that was risky for his men and initially caused an alarming spike in blasts, bringing resistance from within his command.

Clearance teams were going out on patrols daily and getting blown up at rates double to triple the pace of the previous unit. Their armored vehicles were keeping the men alive, but 25 of his soldiers, about a quarter of his unit, suffered concussions in their first month.

But it was a new way of thinking in what has become the deadliest form of combat in Afghanistan. More American soldiers have been killed or injured by IEDs than any other cause, and the number of IED incidents climbed from 2,677 in 2007 to 8,159 in 2009, NATO&#8217;s Joint Multinational Training Command reported.

Recognizing the urgency, the military&#8217;s Joint IED Defeat Organization, or JIEDDO, has spent $1.6 billion since last September on new technologies to help soldiers protect against and detect IEDs, with plans to double that figure by September. The agency also more than doubled the number of route-clearance teams, from 23 to 56, to concentrate on hot spots.

In Sabari, Sayer laid out a plan for his men to finally clear Route Alaska and win the battle for control of the primary route. He believes the plan can forge a new direction in route clearance.

"It took a lot of convincing," he said. "I showed them my long-term plan, that we could assure mobility for Route Alaska. Once they saw we weren&#8217;t going out there just to go out there, they understood."

The top JIEDDO commander recently told reporters in Washington that the overall number of roadside bombs detected is not a measure of success.

"It&#8217;s whether or not the IED was effective against the coalition," said Lt. Gen. Michael Oates. "So finding more IEDs is a good thing, before they go off."

Sayer, as a veteran of two tours in Iraq, has been through as many as 25 blasts and 10 concussions. He understands the toll it is taking on his men.

He said new rules limiting soldiers to a maximum of five concussions are geared at keeping them from long-term mild traumatic brain injury.

They are seeing results and Sayer&#8217;s men believe the approach works. The steady presence gives insurgents less time to plant and camouflage bombs or to make them as powerful. Sayer&#8217;s men got to know the road, something he considers a key factor the last route-clearing unit forfeited by staying off the road. The men could more easily track changes, such as new holes or signs of digging.

"It keeps the bombs smaller," said Staff Sgt. Sean Parker, who was in the truck that got blown 30 feet by a car bomb. "At times there may be more of them, but they&#8217;ll be smaller.

Sayer said the men are finding more bombs than they are hitting, and insurgents need to work harder to replenish their arsenal to keep bombing the roads.

Capt. William Yount, operations officer for the Explosive Hazards Coordination Cell, which monitors the practices of route-clearance teams, called Sayer&#8217;s RCPs "the best in the country that we have seen."

"Not only do these folks operate effectively, his RCPs have the highest found/cleared rate that most people have ever seen over here," Yount said. "When you combine those stats with the reality that they operate in the hottest [IED] spot in [Regional Command East], you begin to see why these guys are the best at what they do."

Sayer acknowledged that it&#8217;s too soon to gauge results on the ground and there is indication that, in response to his unit&#8217;s work, the IED network simply redirected its insurgents to another area nearby. Since Sayer&#8217;s offensive began, the Terezai district just south of Sabari has become a hot zone for bombs, surpassing Sabari in the number of IEDs.

Sayer&#8217;s men have begun targeting Terezai as well, and he has seen a recent drop there, he said.

Stars and Stripes reporter Jeff Schogol contributed to this story.