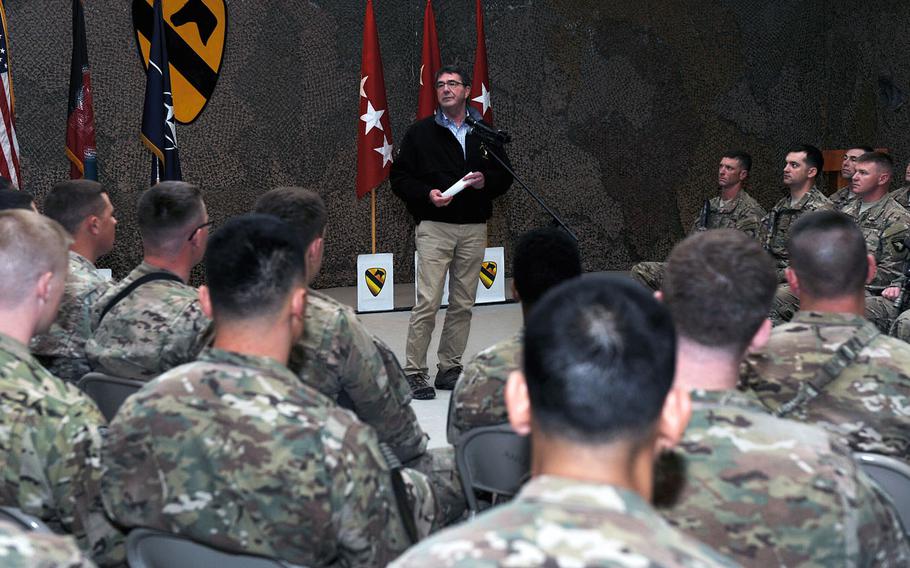 Secretary of Defense Ashton Carter speaks to airmen and soldiers during a visit to Kandahar Airfield, Afghanistan Feb. 22, 2015. Having sworn in only five days prior, the trip was Carter's first official visit to Afghanistan as defense secretary. (Whitney Amstutz/U.S. Air Force)

He goes in with a stronger hand than any new secretary in memory.

On Feb. 20, after just three days in office, Carter flew to Afghanistan and immediately injected himself in the foreign policy conversations roiling Washington and in the process, analysts say, establishing himself as a player with a White House accused of micromanaging.

He said that the U.S. is considering slowing the pace of troop withdrawals and base closures there, as well as changing the counterterrorism mission to account for new threats.

President Barack Obama’s critics have accused him of rushing for the exits in Afghanistan while the Taliban insurgency continues. Recent events in Iraq, where the Islamic State militant group overran much of the country and routed the U.S.-trained Iraqi army after American troops were withdrawn, added fuel to that criticism.

Obama had called for the U.S. military presence in Afghanistan, which now stands at around 10,000 servicemembers, to be halved by the end of this year and shrink to an Embassy presence by the end of 2016. But Carter signaled that the plan might be significantly revised to keep the Taliban at bay.

“Our priority now is to make sure this progress [in Afghanistan] sticks,” he said during a joint press conference with President Ashraf Ghani in Kabul.

Although the new Pentagon chief has not submitted formal recommendations about altering time lines, his public comments suggest that he is strongly in favor of it.

Carter is no novice when it comes to defense policy. He dealt with Afghanistan issues at the Pentagon when he served as deputy secretary and filled other senior positions.

“He’d made many trips to Afghanistan, and was very close to the troops, and had clear ideas about what needed to be done there, so [quickly going out into the field] is not surprising,” former Secretary of Defense William Perry said. “I think that when [Carter] took this job, he was better prepared for it than any of his predecessors, including myself … He knew the job, he knew what he wanted to do, and I figured he would hit the deck running, and that’s exactly what he did.”

After meeting with commanders and troops in Kabul and Kandahar, Carter turned his attention to the other ongoing American war effort and flew to Kuwait. There he hosted an extraordinary confab at Camp Arifjan with 25 senior U.S. military and diplomatic leaders to discuss the campaign against the Islamic State terrorist group, also known as ISIS or ISIL.

He called the attendees “Team America.” After a six-hour talk on how to best combat the militants, Carter said the Obama administration and the international anti-Islamic State coalition have the “the ingredients of the strategy” right, but he told reporters that the coalition needs to do better in certain areas.

Defense analysts were encouraged by his decision to convene a war council to discuss the broader anti-Islamic State strategy.

“This message it sends [is that] that the secretary seems to want to lead from the front when it comes to working with the military commanders and the analysts on the ground in the region in terms of having a thorough campaign against the Islamic State,” said Nicholas Heras, a Middle East expert at the Center for a New American Security. “That can be helpful in terms of building the long-range strategy, and that will hopefully inform how this campaign against ISIS plays out and also informs the contingency planning.”

The Obama administration’s Middle East policy has come under heavy criticism. Decisions have yet to be made about whether to deploy special operations teams to call in more precise airstrikes in Iraq, or the level of support that will be given to Syrian rebels that the coalition plans to train to battle the Islamic State.

“I think that a lot of what he has done or been doing as secretary of defense [is] working at issues which clearly needed to be addressed, where there was a was a need for urgent action,” said Anthony Cordesman, a defense expert at the Center for Strategic and International Studies.

Some in Washington believe Carter’s predecessor, Chuck Hagel, was a solid manager of the Defense Department but was too deferential when it came to developing and articulating war strategies. During his first trip as Pentagon chief, Carter demonstrated that he wants to have a strong hand in policymaking.

“He’s clearly trying to set a different tone, and I think he’s succeeded in doing that,” said Kenneth Pollack, a defense expert at the Brookings Institution. “He’s make it clear to a whole variety of people that he’s really determined to become intimately involved with all of the different policy issues related to U.S. security, that he’s going to take a fresh look at them [and] he’s not simply gonna be willing to continue the policies of the past. And he wants to examine them right from the start, and ask if the United States is doing the right thing, and if not, what should we be doing instead?”

Hagel got off to a terrible start as secretary of defense following a weak performance at his confirmation hearing. Political observers believe it damaged his standing within the power centers in Washington, and it was difficult for him to recover. With less than two years to make his mark and cement his legacy, Carter needed to show political strength right out of the gate.

“When you do [what Carter did], you show you’re taking charge … A secretary of defense has to take charge [because] this is a very different cabinet position” than any other and it’s more complicated, Cordesman said. “A secretary of defense that doesn’t demonstrate that he is going to be really active is a serious problem.”

The Obama White House has been accused of micromanaging the military, and Hagel was viewed as having less influence than other members of the president’s national security team. During his first trip, Carter made it clear that his voice will be loud.

“I’m not going to pull any punches, I’ll say it exactly the way I see it … That’s what [Obama] deserves. He won’t necessarily do what I recommend, OK. Fair enough. He’s the president, I’m not. But he deserves to hear what I say and what I think,” Carter said during a troop talk in Kandahar. “One person, no matter how able they are, couldn’t possibly get on top of all those things. He needs help. And one of my jobs is to help him, and then to carry out those instructions.”

Carter is Obama’s fourth secretary of defense. Leon Panetta and Chuck Hagel both served in the post for less than two years, and Obama has been criticized for cycling through so many Pentagon leaders.

“It gives him some extra freedom to maneuver, because obviously, this White House doesn’t want him to resign as well. That would be a real political black eye for them,” Pollack said.

Cordesman said Carter won’t get fired unless he publicly clashes with the president on the budget or troop levels. And he believes that the new secretary of defense is politically savvy enough to play the game well in Washington.

Experts predict that Carter will be a strong defense chief going forward.

“Considering his experience, with different jobs in the Pentagon, considering his intellect, his energy, the fact that he was known and respected by the military, all of those things argue, to me, that he was going to make a very effective secretary,” Perry said.

Cordesman credited Obama for tapping Carter for the job at such a turbulent time: “I think that the president made a wise choice.”

Stars and Stripes editor Patrick Dickson contributed to this report.

Correction: The original version of this story misspelled the name of Nicholas Heras, a Middle East expert at the Center for a New American Security.