Defense Secretary nominee expected to be confirmed next week 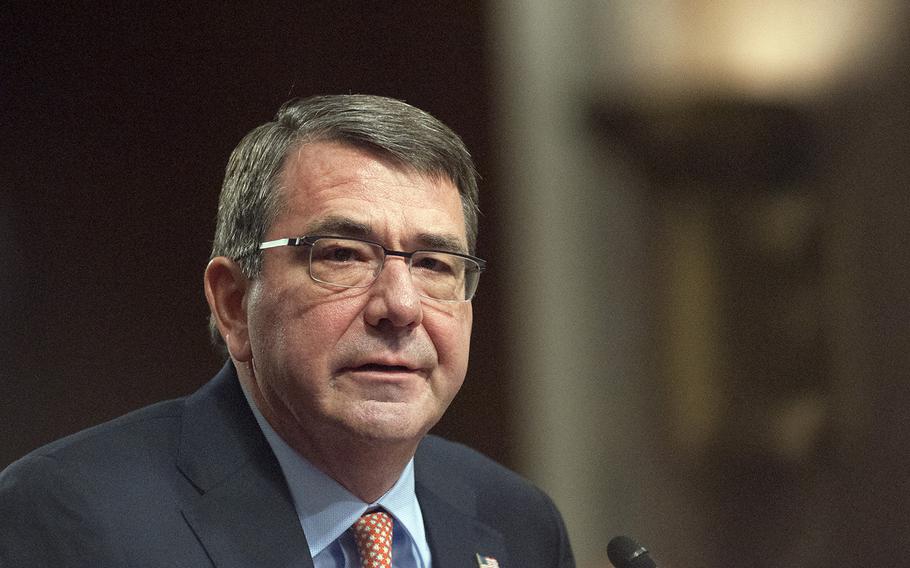 Buy Photo
During a nomination hearing before the Senate Armed Services Committee on Wednesday, Feb. 4, 2015, on Capitol Hill in Washington, D.C., Defense Secretary nominee Ashton Carter told lawmakers that he would 'incline in the direction of providing' Ukrainian troops with lethal arms to combat Russian-backed rebels. (Carlos Bongioanni/Stars and Stripes)

Buy Photo
During a nomination hearing before the Senate Armed Services Committee on Wednesday, Feb. 4, 2015, on Capitol Hill in Washington, D.C., Defense Secretary nominee Ashton Carter told lawmakers that he would 'incline in the direction of providing' Ukrainian troops with lethal arms to combat Russian-backed rebels. (Carlos Bongioanni/Stars and Stripes) Buy Photo
Ashton Carter attends a Senate Armed Services Committee hearing on Capitol Hill on Wednesday, Feb. 4, 2015, as committee members considered his nomination to become the next Secretary of Defense to replace outgoing Defense chief Chuck Hagel. In the background looking on are Carter's wife, Stephanie, and daughter, Ava. (Carlos Bongioanni/Stars and Stripes)

WASHINGTON — The chairman of the Senate Armed Services Committee is aiming to get President Barack Obama’s defense secretary nominee confirmed next week.

Sen. John McCain, R-Ariz., told Ashton Carter at the end of his confirmation hearing Wednesday that he wanted to get his nomination voted out of committee quickly and put on the floor for a full Senate vote by “early next week.”

“The week after that we’re in recess, so we’ll try and get it accomplished,” McCain said.

Carter has been widely praised by lawmakers from both parties, and his nomination is not expected to face any serious opposition.

During the hearing, Carter was asked about a wide array of military topics. He told lawmakers that he favors arming Ukrainian troops fighting Russian-backed separatists in eastern Ukraine.

The Obama administration is debating whether to take that step and escalate the conflict that has been raging for nearly a year. Moscow has provided arms, troops and other assistance to the pro-Russian rebels, which have inflicted significant casualties on Ukrainian government forces. Thus far, the U.S. has only provided nonlethal assistance to the Ukrainian military.

“The nature of those arms I can’t say right now because … I haven’t conferred with our military leaders or Ukraine leaders,” Carter said. “But I incline in the direction of providing them with arms.”

The U.S. signed the multinational 1994 Budapest Memorandum on Security Assurances, which promised Ukraine that its territorial integrity would be respected if it gave up the nuclear weapons that it inherited from the Soviet Union. Carter suggested that the U.S. needs to live up to its promises.

“That agreement provided for Russia to respect the territorial integrity of Ukraine, which it has obviously not done,” he noted. “The United States took on a commitment in the very same agreement to [assure] the ability of Ukraine to find its own way as an independent country. That is at stake today, and that’s why I think we need to provide support to the Ukrainian government.”

McCain criticized the Obama administration’s cautious approach, asking rhetorically what would have to happen before Obama would agree to give arms to the pro-Western Ukrainian government.

“What does it take? Do [the Russians] have to send in more hundreds of tanks that the Ukrainians have no weapons to defend themselves [against]? There’s 4,000 dead now,” McCain said. “How many more do you think [have to die] before we at least do them what seems to be common decency, giving them the ability to defend themselves?”

McCain compared the Obama administration’s approach to the Ukraine crisis to European governments’ appeasement of Adolf Hitler leading up to World War II.

“Certainly [Russian President] Vladimir Putin has gone literally all in,” McCain said. “This is reminiscent of the 1930s to me. And Neville Chamberlain might be proud” of Obama’s response.

In response to a lawmaker’s question, Carter made clear that he was not advocating sending U.S. combat troops to Ukraine to join the fight.

Other topics addressed at the hearing include:

- Afghanistan: There are about 10,000 U.S. troops remaining in Afghanistan. Obama plans to withdraw nearly all of them by the end of 2016. Carter said he might ask Obama to keep more troops there if the situation on the ground requires it. “The president has a plan. I support that plan. At the same time, it’s a plan. And if I’m confirmed and I ascertain as the years go by that we need to change that plan, I will recommend those changes to the president.”

- Asia-Pacific rebalance: As China rises and the war in Afghanistan winds down, the U.S. is in the process of rebalancing its forces to the Asia-Pacific region. Carter said the U.S. needs to keep its eye on the rebalance, even as crises in the Middle East and Europe have the world’s attention. “The world needs to know the United States can do more than one thing at once, and we can keep our commitments [in the Asia-Pacific.] We’re buying new capabilities that won’t necessarily have a role in the Middle East or in NATO but are principally designed for that theater, and I think we need to keep those investments going.”

- Sequestration: Strict budget caps known as sequestration are slated to continue for the Pentagon in fiscal 2016 if Congress doesn’t change the law. Carter ripped sequestration, saying it was “risky to our defense, it introduces turbulence and uncertainty that are wasteful, and it conveys a misleadingly diminished picture of our power in the eyes of friends and foes alike.”

- Gitmo detainee releases: Carter was asked if he would resist pressure from the White House if it tried to micromanage military affairs. He said he would be “a stickler for the chain of command,” and he would “play it absolutely straight” when it came to deciding whether to release particular detainees from the U.S. military prison at Guantanamo Bay, Cuba.

- The Islamic State: Carter said he supports the thrust of the administration’s approach to the fight against the Islamic State group in Iraq and Syria. “I think it’s important to strike back at [the Islamic State] as we’re doing from the air, but to begin to retake territory as soon as we can build the forces on the ground,” he said. “It’s my understanding that in coming months the Iraqi security forces, assisted by us, will begin to take back territory” from the Islamic State.

- Women in combat positions: The military has been opening up more positions to women. The services are currently reviewing whether to keep some positions, such as infantry and special operations forces, closed to women. “I strongly incline towards opening them all to women,” he told lawmakers, “but I am also respectful of the circumstances and of professional military judgment in this regard. If I am confirmed I’d want to confer with our own leaders in the Department of Defense” before making a final decision.

- DOD cooperation with the VA: Carter was asked if he would tackle a pharmaceutical problem encountered by former servicemembers when they leave the military and seek treatment from the VA. “I remember from years back when I was in the department of this question of the difference formularies… DOD calls a drug one thing, and VA calls it another thing, and they have one set of dosages. And we’ve got to get these together,” Carter said.

- Acquisition reform: Carter has long advocated for improving the acquisition process, and said that would be a top priority if he is confirmed. “The taxpayer cannot comprehend it, let alone support the defense budget, when they read… of cost overruns, lack of accounting and accountability, needless overhead, and the like. This must stop,” he said in his opening remarks.

- Cyber: Carter said the Pentagon and the country as a whole are unprepared on this front: “There’s no point in having planes and ships and armored vehicles in today’s world if the network is itself vulnerable. [DOD is] not where it should be in terms of making [military networks] immune to attack by a potential enemy that would impair our own forces engaged with that enemy… We’re not anywhere near where we should be as a country… I think if people fully [understood] how vulnerable we are in cyber space… they’d want us to be doing a lot more than I believe we are doing now.”

Carter is a technocrat and policy wonk who’s worked at the Pentagon for years. From October 2011 to December 2013, he served as deputy secretary of defense. In that role he led the Strategic Choices and Management Review, which laid out the military implications of sequestration.

Prior to being the Pentagon’s No. 2 official, Carter served as undersecretary of defense for acquisition, technology and logistics. He oversaw the buying of the military’s newest weapon systems and technologies. He earned a doctorate in theoretical physics from Oxford University, where he was a Rhodes Scholar.

“He’s one of the few people who actually understands how many of our defense systems work,” Obama joked when he announced Carter’s nomination in December.

During the Clinton Administration, Carter was assistant secretary of defense for international security policy.

With less than two years left in office, Obama tapped Carter for the Pentagon’s top post because he wanted someone who didn’t need to spend time learning the ropes.

“He knows the Department of Defense inside and out … which means that on Day 1, he’s going to hit the ground running,” Obama said.

Unlike outgoing Secretary of Defense Chuck Hagel, Carter has never served in uniform.