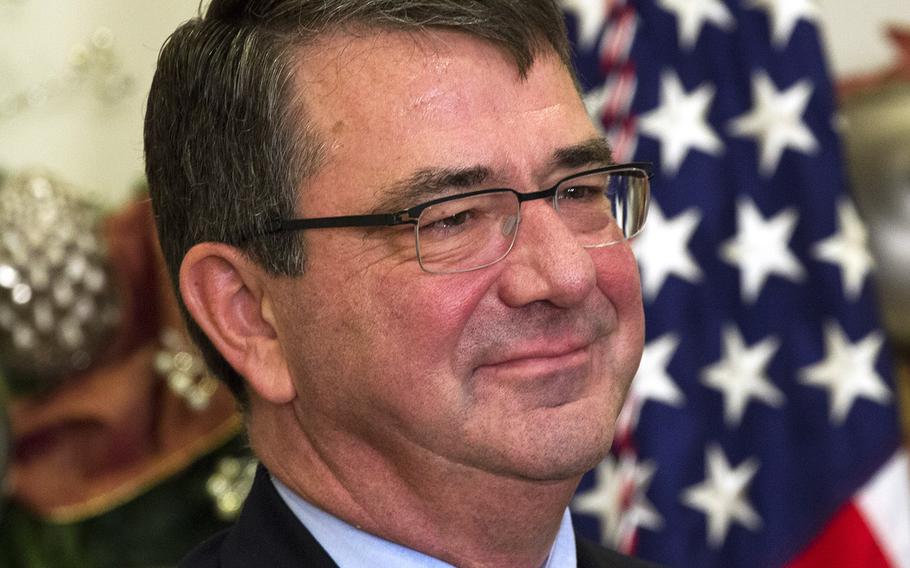 Buy Photo
Ashton Carter listens as President Barack Obama announces his nomination as secretary of defense at the White House in December 2014. (Joe Gromelski/Stars and Stripes)

A statement by Secretary of Defense Ash Carter on the Military Compensation and Retirement Modernization Commission Report, as released by DOD on April 30, 2015:

The Department of Defense commends the Military Compensation and Retirement Modernization Commission for its 18-month independent review of the military retirement and compensation programs administered both inside and outside DoD. Their work confirmed many positive changes that we're making to uphold our commitments to our people, and also pointed out areas where we can do better.

Last month I told members of Congress that many of the commission's proposals would significantly affect our servicemembers and their families, and that DoD owes them, President Obama, and the country our utmost diligence and most rigorous analysis. And over the past three months, DoD has conducted a rapid yet comprehensive review of the commission's recommendations, working closely with both the commission and our interagency partners to adopt or refine the specific proposals where possible.

As President Obama informed Congress earlier today, we are now prepared to support specific proposals for 10 of the commission's 15 recommendations, and, given the complexities of four others, we will continue to conduct analysis and work with the commission over the next few months. In some instances, the Defense Department is already taking steps to implement these first 10 recommendations, but in areas that will require legislative changes to do so, we will work quickly to submit proposed legislative language to Congress as soon as possible.

However, while we agree with the commission that reforms to the military health care system are needed, we also believe that the TRICARE proposals in President Obama's fiscal year 2016 budget serve as a good first step by offering servicemembers, military families, and retirees greater choice and control over their health care decisions. DoD looks forward to working with the commission, our interagency partners, and interested members of Congress over the course of this year as we develop additional reform proposals to be considered for the President's fiscal year 2017 budget.

The choices we face about military compensation are both vexing and critically important. DoD will continue to work closely with the Congress and the commission to achieve the goals we share: ensuring the long-term strength and vitality of our all-volunteer force, and honoring all our servicemembers -- past, present, and future.