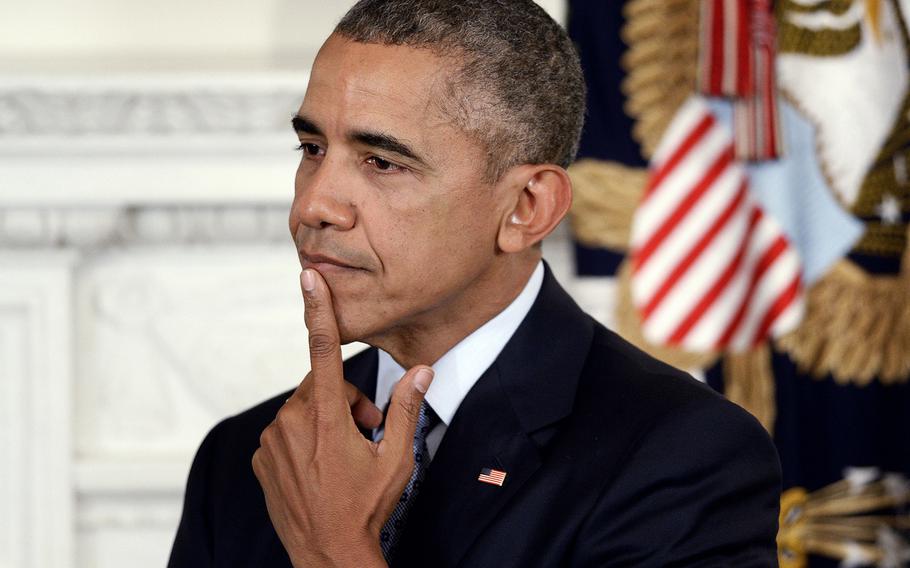 WASHINGTON — The U.S. defense policy bill for 2016 passed Congress on Wednesday and is headed to President Barack Obama, setting up what will likely be a protracted political battle over the military and federal spending.

The National Defense Authorization Act, comprised of a $515-billion base defense budget and an $89-billion overseas war fund, includes an historic overhaul of 20-year military pensions, hikes to Tricare prescription copays and eased restrictions for guns on bases. But the White House vowed again this week to veto it — a rare move — in an effort to force Republicans to lift caps on federal spending. The president could make a decision this week.

A veto will send the NDAA back to Congress, and it was unclear whether Republicans could rally enough votes to override Obama. If the bill is scuttled by a veto, the Pentagon will be left waiting for policy guidance while lawmakers face the tough task of repealing mandatory spending caps that have shackled federal budgets for the past four years.

“This veto threat is about one thing and one thing only: politics,” Sen. John McCain, R-Ariz., said on the Senate floor. “The president wants to take a stand for greater domestic spending and he wants to use the vital authorities and support our troops need to defend the nation as leverage.”

Obama wants Congress to solve one of its most intractable issues — the spending limits that resulted from the Budget Control Act of 2011. Lawmakers agreed to set limits and stick to them or the act mandates deeper, across-the-board cuts called sequestration.

The president has said he will veto any budget bill that continues to lock in the caps, including the NDAA.

The defense policy bill has been vetoed only four times in the past 53 years but has always eventually been passed into law, according to the House Armed Services Committee, which had a lead role in crafting it.

McCain called the potential veto “foolish, misguided, cynical and dangerous” during a time of heightened global threats. Republicans in both chambers portrayed it as a betrayal of the military and troops.

The party garnered enough NDAA backing from Democrats in the Senate for a so-called “veto proof” majority of 70-27 but it did not manage to reach that threshold in the House, leaving doubts over the outcome of any override votes.

Some Democrats broke with the party line and voted with Republicans on Wednesday, but they may be less likely to oppose Obama in an override vote.

“Our troops deserve real funding not budgetary gimmickry,” he said.

Specifically, the NDAA includes a Republican plan to circumvent a spending limit on defense by funneling more than $38 billion through the war fund that is exempt from the cap, a move the Pentagon has said will make long-term planning difficult.

Even if there is a successful veto, the Defense Department is unlikely to feel effects — at least not for a couple of months.

Congress passed a last-minute budget measure Sept. 30 that will keep the DOD and the rest of the federal government running at current funding levels until Dec. 11. It gave lawmakers another 10 weeks to figure out a solution to the budget impasse.

The prospects of a solution to the caps by December are slim. Republicans and Democrats made no progress this year on an agreement to lift them, and some have instead discussed a yearlong temporary budget bill this winter that could keep the lights on at the DOD until next fall.

The White House has stood behind the veto threat for months.

“It certainly is also not the most effective way for us to show our support to our men and women in uniform,” he said. “They’re all doing their jobs and it’s time for Congress to do theirs, and that is to pass a budget that properly reflects the economic and national security priorities of the country.”