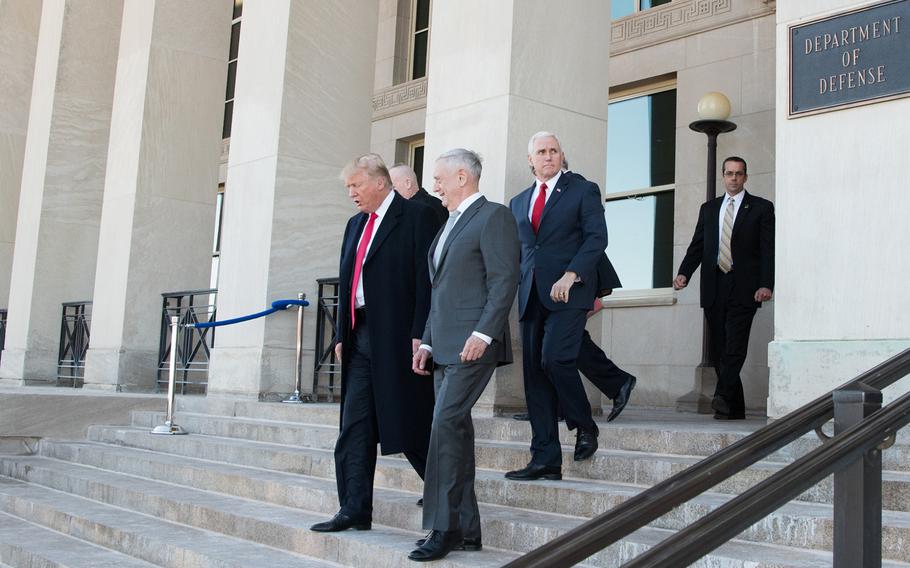 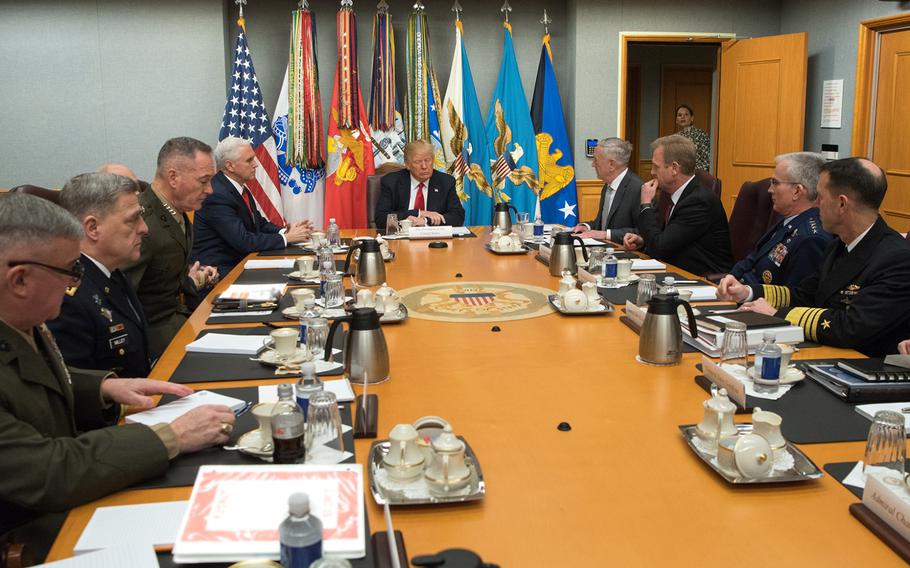 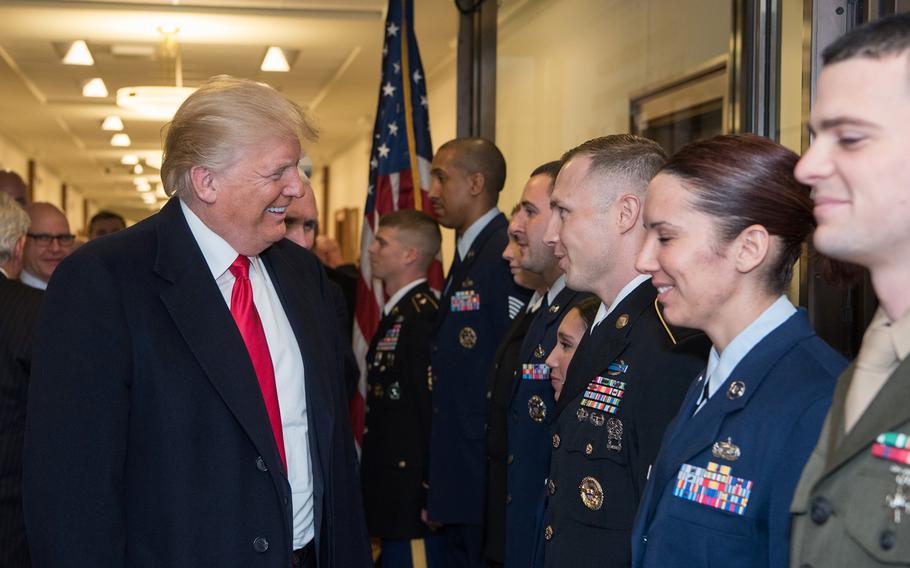 President Donald Trump speaks to servicemembers after a meeting at the Pentagon in Washington, D.C., Jan. 18, 2018. (Amber I. Smith/U.S. Army)

DOD advisory: "Continuing Family Support in the Event of a Government Shutdown"

WASHINGTON — With only hours to go before a midnight deadline and Congress still unable to reach a deal to fund the federal government, the Department of Defense is preparing for an array of scenarios come Saturday if it is required to shut down parts of its operations.

Lawmakers on Capitol Hill were still scrambling to approve a temporary spending measure, known as a continuing resolution, by midnight Saturday. By Friday afternoon, however, leaders for a long list of government entities, including the Pentagon, were putting together emergency contingency plans if Congress fails to reach a deal.

“As I stand here this morning, watching the news off the Hill, we’re on the verge of a government shutdown or, at best, yet another debilitating continuing resolution,” Defense Secretary Jim Mattis said Friday.

The military, along with the rest of the government, is operating off its fourth short-term funding bill since the 2018 fiscal year started Oct. 1. It’s become a common practice for Congress to rely on the continuing resolutions until a full budget is approved. But this is one the closest shutdown prospects in years.

A House-passed stopgap bill still awaits approval in the Senate, where Republicans need support from their Democratic colleagues to pass a plan. Senate Democrats, meanwhile, are threatening to reject the plan without a fix for the Deferred Action for Childhood Arrivals, or DACA, program.

“Secretary [Mattis] and I hope that Congress will enact a short-term continuing resolution or an annual appropriations bill for defense activities,” Deputy Defense Secretary Patrick Shanahan wrote in a 14-page shutdown memorandum to Pentagon leaders Thursday. “However, prudent management requires that the department be prepared for the possibility of a lapse in appropriations.”

Without the temporary budget deal, a large share of the government could shut down, triggering a disruption to many federal operations and services, including military pay and programs. Starting Saturday, the federal government would send home nonessential workers without pay, close national parks and museums and trigger new administrative delays.

“Military personnel are considered essential so they continue to do their jobs” and this extends to other law enforcement services such as the Secret Service, FBI, said Andrew Sherbo, a University of Denver finance professor who has tracked government and defense budget issues. “It is really a ‘partial U.S. government shutdown.’ It is not a complete shutdown.”

But people who do work, won’t get their paychecks on payday, including military and civilian employees. In past shutdowns, everybody eventually got their full pay back even though some of them did not work, Sherbo noted.

A 16-day shutdown in October 2013 caused a rash of military programs to come to a sudden halt, including pay stoppage for military and civilian personnel and the disruption of base services such as commissaries. In addition, death gratuity payments for 30 Gold Star families were also disrupted.

That year, Congress quickly passed a bill to pay military personnel, but at that time, it wasn’t clear when they would be paid. Defense Department civilian workers also did not know if they would get paid.

Eventually, the government could end up paying workers’ salaries though no work was done.

“We’re optimistic” Congress will pass a plan, Pentagon spokeswoman Dana White tweeted Thursday night. “No matter what, the #military will show up and defend the American people, BUT we will not be able to pay them until the shutdown ends.”

Who specifically will or won’t work will be up to the various military and Pentagon leaders, who will decide what activities are critical, Shanahan wrote in his memo.

The stakes are high for the Pentagon, with the military engaged in its longest-running war and more than 700,000 Department of Defense civilian workers facing possible furloughs.

Mattis, following the Friday morning release of a new National Defense Strategy, lamented the prospect of a shutdown that he agreed could have serious repercussions.

“Today as our competitive edge over our foes erodes due to budgetary confusion, even with storm clouds gathering, America’s military, as I speak, is operating under yet another continuing resolution,” he said. “For too long we have asked our military to stoically carry a ‘success at any cost’ attitude, as they work tirelessly to accomplish the mission with now inadequate and misaligned resources simply because the Congress could not maintain regular order.”

That includes troops serving overseas, where warfighting operations in places such as Afghanistan, Iraq and Syria would continue uninterrupted, according to Shanahan.

“The department will, of course, continue to prosecute the war in Afghanistan and ongoing operations against al-Qaida and the Islamic State of Iraq and Syria, including preparation of forces for deployments into those conflicts,” Shanahan wrote in his memo. “The department must, as well, continue many operations necessary for the safety of human life or the protection of property.”

However, many other activities unrelated to these missions would be shut down in an “orderly and deliberate fashion,” he said. That includes, for example, widespread cancelation of work-related travel unless it is in direct support of military operations.

That includes members of the National Guard reporting for duty at armories or servicemembers’ maintenance activities, Mattis said Friday.

“We are very concerned about the impact of a shutdown on our uniformed personnel who may not get paid until the government reopens,” Denise Rohan, national commander for the American Legion, said in a statement Thursday. “Many of our servicemembers and their families do not have the cash reserves to rely upon in the absence of a regular paycheck and would suffer unnecessary disruption to their lives. The American Legion would be very disappointed if our elected officials cannot make the necessary compromises to keep the government open.”

This could happen through a measure to exempt the military and the Department of Defense from the worst impacts, such as installing emergency payments for servicemembers, but that remains to be seen. A House proposal filed this week proposes to keep military pay going under a shutdown, but support for the plan remained unclear as of Friday.

In some cases, military personnel might be required to fill in for civilian workers who have been furloughed, Shanahan said.

Military personnel moves will also be limited under a shutdown. Only military servicemembers moving to and from posts linked to critical activities will be allowed, for example.

Off-post, civilian-provided care covered by Tricare would not be impacted by the shutdown nor would medical care for wounded servicemembers.

Civilian workers affected Department of Defense civilian personnel – estimated at 742,000 – carrying out critical support functions for the military will continue to work during a government shutdown.

This also applies to civilian military leaders because they are Senate-approved presidential appointments exempt from a shutdown’s impacts.

“Only the minimum number of civilian employees necessary to carry out excepted activities” will be kept on, Shanahan said.

And those workers who are retained can only work on services related to critical security efforts.

However, like the military, they also won’t see pay without approval from Congress. During the October 2013 shutdown, Congress eventually voted to pay civilians for the days they were furloughed.

On Friday, Mattis estimated as much as 50 percent of their civilian workforce could be furloughed. This includes military technicians who are not needed to carry out support for critical security efforts and workers at medical facilities.

Mattis said there was “a huge morale impact” and wondered how long he could keep good people in such an environment.

Some veterans face challenges The Department of Veterans Affairs wouldn’t be affected as much as other federal agencies because it receives one-year advance appropriations from Congress. The decision to fund the VA in advance was made in 2009 at the urging of veterans organizations that wanted to ensure VA health care was protected from future shutdowns.

The VA health care system, including more than 160 hospitals and hundreds of community-based outpatient clinics, would remain fully operational. Veterans eligible for VA pay would still receive their checks, and veterans’ cemeteries would continue burial services.

Most of the VA’s budget, 86 percent, is funded in advance. This means most employees would continue to work if the Senate doesn’t come to an agreement Friday, but some workers could be subject to furlough.

The VA made a contingency plan in anticipation of an August shutdown. The plan, posted on the agency’s website, states more than 336,000 of approximately 377,000 total employees would continue to work with pay.

Because of the furloughs, recruiting, hiring and training of new employees would be halted, and responses to congressional and Freedom of Information Act requests would cease. The appeals process for veterans’ benefits claims would be suspended during a shutdown, as would military transition programs and education benefits assistance programs.

Barrett Bogue, vice president of Student Veterans of America, said he’d hoped the VA would communicate with student veterans that their education benefits would not be interrupted, but the agency hadn’t made any such announcement as of Friday afternoon.

Bogue said SVA was on standby to help any student veteran negatively affected, though the group expected monthly housing stipends from the VA would continue as normal in the case of a shutdown.

“Our biggest concern is there hasn’t been a lot of information shared to students using the GI Bill about what’s going to happen,” he said. “We expect VA to prioritize the timely administration of education benefits. For many student veterans, they rely on monthly housing allowance to get by and live, and we don’t want to see that interrupted at all.”