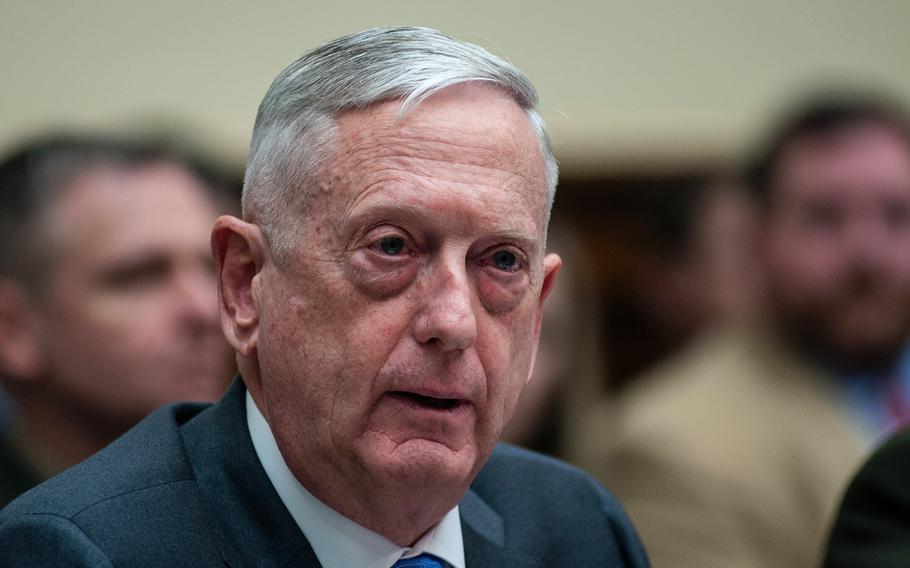 WASHINGTON — Defense Secretary Jim Mattis, who has faced controversy over a military policy on transgender recruits recently released, said Thursday that he is prepared to defend the new plan.

But Mattis also told the House Armed Services Committee that he will defer to the courts’ direction on the matter for now.

The comments are among the latest from a Pentagon official since the White House said last month that it intends to at least partially ban transgender people from serving in the military. Pentagon officials have mostly dodged questions on the matter, pointing to several ongoing court cases allowing transgender servicemembers to continue to serve.

“It’s a highly charged issue from some people’s perspective and it’s under litigation right now,” Mattis said during the congressional hearing. “Current policy stays in effect… as directed by the courts and I have submitted to the president what I think is the best military advice.”

The hearing, which was part of Mattis’ wide-ranging testimony before the House committee, was part of an exchange with Rep. Jackie Speier, D-Calif., who rejects the proposal. Speier questioned the proposal’s lack of input from medical groups, which refuted its conclusions and said there were no valid medical reasons for the exclusions.

Speier also held up a photograph of Air Force Sgt. Logan Ireland, a transgender servicemember who was named noncommissioned officer of the quarter during a deployment to Afghanistan.

“You rolled out this new policy and now you are basically saying ‘I’m not prepared to defend it,’” Speier said.

Mattis rejected Speier’s claim. Mattis said officials looked at enlistment standards and gave a recommendation that troops who do not have gender dysphoria should be allowed to serve.

Under former President Barack Obama’s last Defense Secretary Ash Carter, the Pentagon opened military service to all transgender people in June 2016, largely based on a study that it commissioned from the think tank Rand Corp. The organization estimated there were between 4,000 and 12,000 transgender troops on active duty and in the reserves.

In Mattis’ recommendation, released publicly in a 48-page document last month alongside the White House announcement on March 23, the defense secretary proposed banning any individuals from serving who have a history or diagnosis of gender dysphoria except in certain cases.

“I’m prepared to defend it. But out of respect for the courts, I do not intrude,” Mattis told Speier. “It was the best military advice I could derive from civilian overseers and military personnel.”

Across the Capitol Hill complex Thursday, Army officials testified before a Senate committee that they had not seen any issues with unit cohesion as a result of open transgender service.

“Nothing has percolated up to my level,” Army Secretary Mark Esper testified before the Senate Armed Services Committee.

Gen. Mark Milley, Army chief of staff, echoed the remarks during questions from Sen. Kirsten Gillibrand, D-N.Y., on whether there were impacts on unit cohesion.

“Not at all. We have a finite number. We know who they are and it is monitored very closely, because I am concerned about that, and I want to make sure they are treated with dignity and respect,” Milley said. “I have received precisely zero reports of issues of cohesion, discipline, morale and all those sorts of things.”

“It is telling for the Army chief of staff to acknowledge there have been ‘zero’ problems with cohesion, discipline or morale just weeks after a DoD report, ostensibly based on months of research, insisted that transgender troops pose a risk to cohesion, discipline and morale,” Belkin said in a statement.

Stars and Stripes reporter Corey Dickstein contributed to this report