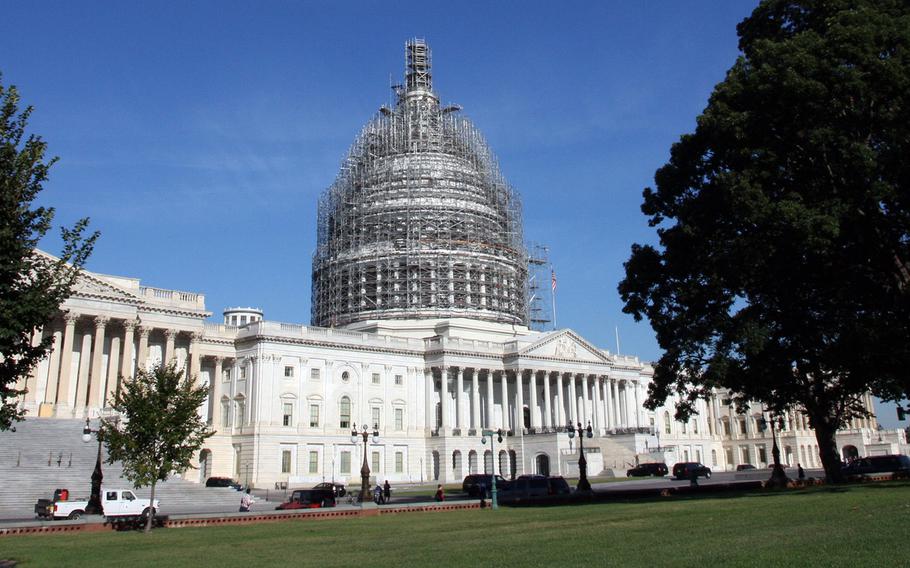 An annual defense policy bill with a military benefits overhaul advanced Tuesday toward a final vote in Congress despite opposition from Democrats. (Joe Gromelski/Stars and Stripes)

WASHINGTON — An annual defense policy bill with a military benefits overhaul advanced Tuesday toward a final vote in Congress despite opposition from Democrats.

Republicans in the Senate overcame a filibuster attempt, setting the stage for a possible vote Wednesday on sending the National Defense Authorization Act to President Barack Obama, who has threatened to veto it. The House passed the bill last week.

The 2016 NDAA, comprised of a $515-billion base defense budget and an $89-billion overseas war fund, calls for an historic overhaul of the military retirement system and hikes for Tricare pharmacy copays. Obama and Democrats oppose the bill because it funnels more than $38 billion for daily military expenses through the war fund, a maneuver by Republicans to circumvent a federal spending cap on defense while leaving limits on other federal spending in place.

“Both sides care about the military, but there are other parts of the government that matter as well … let’s have a balance in our budget that acknowledges that reality,” said Sen. Dick Durbin, D-Ill.

Durbin said the remaining spending caps will affect medical research at the National Institutes of Health, the Department of Homeland Security and the FBI, as well as other federal programs.

The White House has warned it will veto any budget bill that locks in limits for another year. The caps are a result of the Budget Control Act of 2011, a deal allowing the federal debt ceiling to be raised in exchange for mandatory reductions in spending that have shackled Congress for four years.

Sen. Jack Reed, D-R.I., the ranking member on the Armed Services Committee who helped craft the bill, said avoiding the limits on spending by tapping Overseas Contingency Operations, an emergency war fund that is exempt from the 2011 act, is fiscally irresponsible and dishonest accounting.

“If it were not for the OCO issue, I would have likely signed the conference report and voted for this bill,” he said.

Sen. John McCain, R-Ariz., acknowledged frustrations about the spending caps and the budgeting turmoil that it has created for the Pentagon. Defense Secretary Ash Carter and military brass have said the OCO funds do not provide the kind of budget security needed for long-term planning.

“I want a better deal. I am tired of us providing funds for the military on a year by year, ad hoc basis,” McCain said.

But he blamed Democrats for acting irresponsibly by blocking a key defense policy bill at a time when the U.S. is facing increasing tensions and insecurity around the world, including Russian military aggres-sion in Ukraine and Syria and moves by China in Asia-Pacific trade routes.

“Please don’t say you support the men and women in uniform, come to the floor and say that, and then vote against this bill,” McCain said.

The NDAA would overhaul 20-year military pensions into a blended system of reduced-value pensions and 401(k)-style contributions to savings accounts. Tricare beneficiaries also would see increases in the coming year on copay amounts for certain types of prescriptions.

Sen. John Thune, R-S.D., said Democrats are so concerned about restrictions on spending they are will-ing to scuttle a key defense policy bill that provides for national security and troops.

“Basically … Democrats have decided since they can’t get everything they want, they are going to take their ball and go home,” he said.