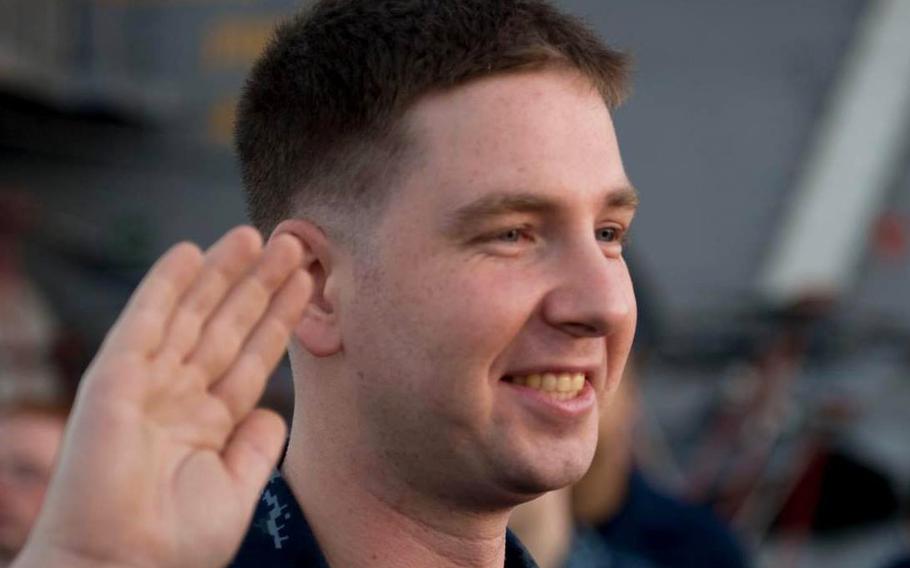 Petty Officer 2nd Class Dmitry Chepusov, a military broadcaster, was found strangled to death in the passenger seat of a car during a traffic stop in Germany in December 2013. Staff Sgt. Staff Sgt. Sean Oliver testified Friday Jan. 23, 2015, that he did not plan to kill Chepusov but that he did plan to dump the body when he suspected the sailor might be dead. (Facebook photo)

RAMSTEIN AIR BASE, Germany — Staff Sgt. Sean Oliver testified Friday that he did not plan to kill Petty Officer 2nd Class Dmitry Chepusov but that he did plan to dump the body when he suspected the sailor might be dead.

Oliver, a technician for the American Forces Network, took the stand in his own defense at the end of the second week of his court-martial. He has pleaded not guilty to charges of premeditated murder and other offenses in the strangulation of Chepusov.

During almost six hours of questioning, Oliver contradicted previous statements he had made to German and U.S. investigators but said he had lied initially to protect himself and others from prosecution. He said the version of events relayed by Army Pvt. Cody Kramer, who testified against Oliver as a witness for the prosecution as part of his own plea agreement, was not true. Kramer pleaded guilty at his own court-martial in October to making false official statements.

In her opening statement for the defense, Capt. Kyra Palmer said that Oliver “feels it’s important to tell you what really happened.”

“As you may have gathered, there’s much more to this story,” Palmer said.

Oliver testified that after a night out drinking in Kaiserslautern on Dec. 13, 2013, he, Chepusov, Kramer, Staff Sgt. Thomas Skinkle and Staff Sgt. Shao-Lung Ping all went to Skinkle’s downtown apartment. In the kitchen, Oliver said, Kramer resumed an argument with Chepusov that had begun earlier in the evening.

Oliver testified that Kramer smacked Chepusov in the head with an empty whiskey bottle, knocking him out cold. Oliver said the blow was the only thing that could have cut Chepusov’s ear, which bled over parts of the kitchen, foyer and bathroom — where Oliver said he dragged Chepusov to hide the altercation from Ping. Kramer, meanwhile, had gone into the living room. Oliver said that when Ping decided to leave, he spoke briefly with him to determine if he’d seen anything. After Ping left, Oliver said, he “dressed down” Kramer for hitting Chepusov.

“I wanted to let him know it wasn’t OK” and he might “be getting in a lot of trouble,” Oliver testified.

This version was far different from what he told investigators and was also at odds with the testimony of both Ping and Kramer. Ping testified that he saw Oliver kick Chepusov twice while the sailor was laid out on Skinkle’s kitchen floor. Kramer testified that Oliver confided to him, as Ping was leaving, that Chepusov was “D-E-A-D dead. Dead dead.”

Ping testified that he overheard part of that exchange, which he recounted in similar terms.

Oliver testified that Chepusov was alive when Ping left.

After dressing down Kramer, Oliver testified, he attempted to rouse Chepusov, who eventually came to. “He asked me what was going on.”

Oliver said he lied to Chepusov and told him he’d fallen and hit his head. Chepusov, he said, wasn’t buying it.

Oliver said he offered to drive Chepusov home, and the sailor accepted, then told Oliver that when he got home, he was going to have sex with his estranged wife — who was staying at their shared home that night — “whether she wants to or not.”

Still, Chepusov’s claim that he would have sex with Zolezzi whether she wanted to or not, which Oliver said Chepusov repeated, caused him to snap.

Oliver said he grabbed Chepusov and drove him into the floor, landing on top of him. He said it took him a while to get a hold of Chepusov’s throat. “It was a lot of effort to actually do it,” he said. He squeezed for 10-15 seconds, he testified, and stopped when he thought Chepusov was knocked unconscious.

Oliver said he only wanted to knock Chepusov out, not kill him, and thought the sailor was still alive. He testified that he moved Chepusov to the bathroom again, then took Skinkle’s keys, left the apartment and drove himself home. He said he left to let Kramer deal with the mess, since he’d started it.

Oliver testified that he felt guilty and later returned to Skinkle’s and woke Kramer for help carrying Chepusov to his car. He said he planned to drive Chepusov home.

Prosecuting attorney Lt. Col. Brian Thompson asked Oliver why he would drive Chepusov home after the AFN broadcaster had earlier threatened to “rape” Zolezzi. Oliver testified that after he had cooled off, that he realized Chepusov was just trying to “get under my skin.”

Oliver said he and Kramer were in the hallway of Skinkle’s apartment building when he first realized Chepusov might be dead. He said he told Kramer his suspicion but didn’t try to confirm it “because I didn’t want it to be true.”

Nevertheless, he said, he decided to dispose of Chepusov’s body.

After putting Chepusov in his car, he said he went back up to Skinkle’s apartment to get towels and bath mats on which Chepusov had bled, while Kramer grabbed a bottle of cleaner Oliver had used earlier to clean up blood and took two empty whiskey bottles. The two men stashed all of the items in the back seat of Oliver’s car, Oliver testified.

Oliver said he set his car’s GPS to the farthest destination he had pre-programmed and started driving. He said he was in “panic mode” and planned to dump the body, possibly in the woods near the destination on his GPS.

According to German police who testified earlier, they pulled him over about 50 yards from the entrance to Vogelweh military housing. Oliver had driven about three miles.

Oliver’s court-martial is scheduled to resume Monday, when the defense may call more witnesses.