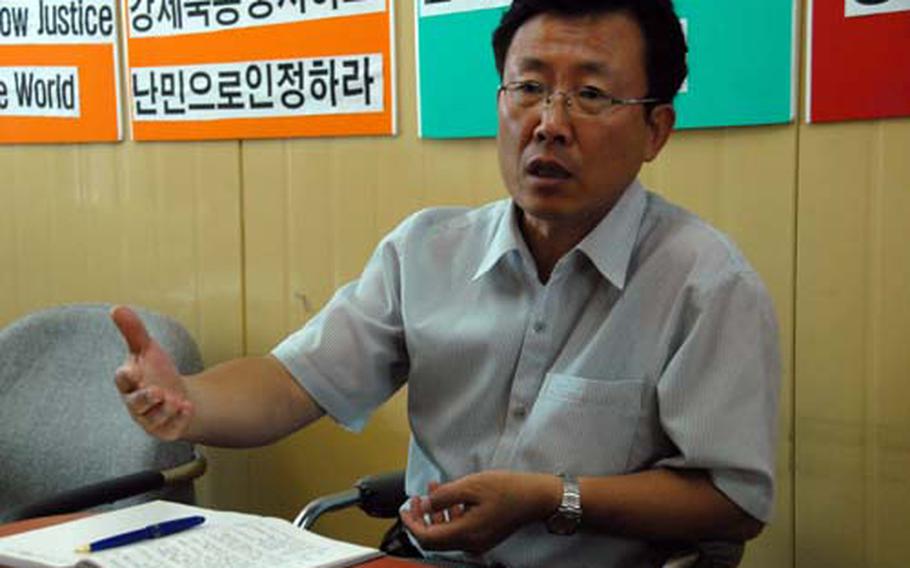 Han Chang-kweon, chairman of the Association of North Korean Defector Organizations, describes escaping North Korea in 1992. Han is one of approximately 13,500 defectors living in South Korea. (Ashley Rowland/Stars and Stripes)

Han Chang-kweon, chairman of the Association of North Korean Defector Organizations, describes escaping North Korea in 1992. Han is one of approximately 13,500 defectors living in South Korea. (Ashley Rowland/Stars and Stripes) 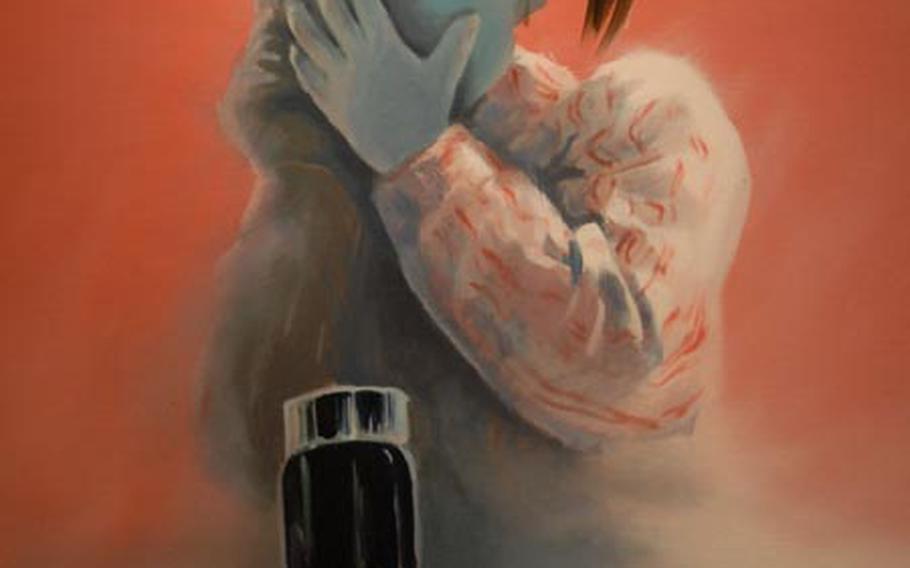 "Niece," a painting by Sunmu, a North Korean defector now living in Seoul, depicts the artist’s niece around the last time he saw her in North Korea, and how he imagines her life has become. All of Sunmu&#39;s relatives, including this niece, remain in North Korea. The water container in front of her represents the insular society of North Korea. Families of defectors often face retribution from North Korea. (Courtesy of Chung Jeong Gak Gallery) 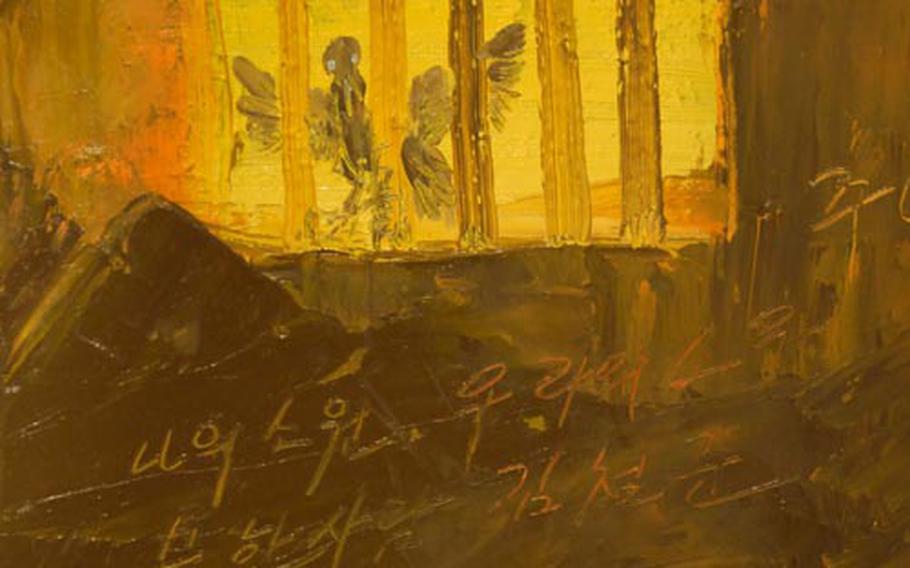 The painting "Wish," by North Korean defector and artist Sunmu, symbolizes North Koreans’ desire to go to South Korea. Those who do manage to escape to the South often find themselves isolated and living in poverty, and some even return to the North. (Courtesy of Chung Jeong Gak Gallery) 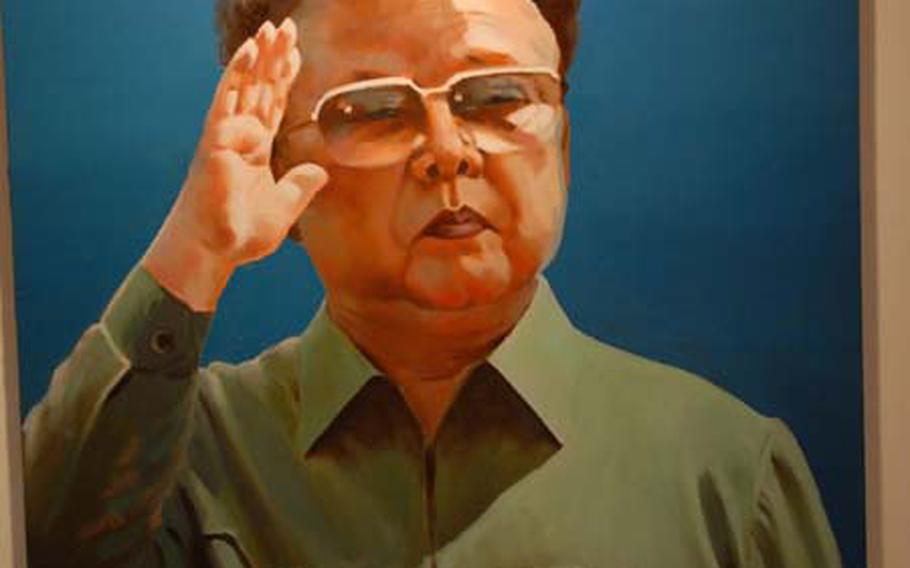 Yes, they have more belongings. And they don&#8217;t have anybody telling them what to do or how to behave.

But most arrive with no job skills, and no understanding of how to get work in a capitalist society, said Han Chang-kweon, a defector and head of the Association of North Korean Defector Organizations. That means many of them remain in the poverty they tried to escape in North Korea.

"In general, the quality of life is better," Han said. But most live in tiny, government-run apartments, and stand out because of their distinct North Korean accents. Many are unemployed, and are targeted by South Korean con artists. They have trouble assimilating into South Korean culture &#8212; something worsened by their lack of money.

"If you don&#8217;t have something everybody seems to have, it causes stress. Its impact is stronger than if you lived in North Korea," he said.

Even some of North Korea&#8217;s privileged wanted to escape. Son Jung-hun, 44, was born in Pyeongyang to a prominent family favored by the communist regime because his father was an officer in the North Korean army during the 1950-53 Korean war, and his grandfather had fought against the Japanese occupation before and during World War II.

He grew up secretly listening to and watching media from the free world.

"I began feeling disillusioned about the North Korean system, which gave no thought to the economy or the people," he said.

He left North Korea for China in 1997 and his family filed a fake missing person&#8217;s report. He came to South Korea in 2002, and his son later escaped and reunited with his father in Seoul.

Son said he had fewer difficulties assimilating because he had some knowledge of capitalism.

Slightly more than a third of North Korean defectors live in Seoul, according to the Ministry of Unification. Twenty-three percent live outside Seoul in Gyeonggi province, which borders North Korea and stretches to Pyeongtaek. Another 9 percent live in the port city of Incheon.

North Koreans who defect to the South are required to attend 280 hours of classes in history and basic life skills on shopping, banking, using hospitals and schools, and getting a job. They also get psychological counseling, and attend language classes that address vocabulary differences between the two Korean-speaking nations.

But Han said defectors aren&#8217;t really welcomed in South Korea or in the United States because neither country wants to pay for them. Between 70 percent and 80 percent are unemployed, he said.

Han said most defectors are women who lived in North Korea near its border with China. It&#8217;s easier for women to escape, Han said, because they are housewives and aren&#8217;t watched closely by the authorities.

Men in North Korea are required to do military and physical labor, and are severely punished if they don&#8217;t show up to their assignments, he said. Seventy-eight percent of the 2,544 North Koreans who defected to the South in 2007 were female, according to the Ministry of Unification. Just 7 percent of the 607 defectors who arrived in 1989 were female.

North Korean defectors receive a resettlement allowance during their first year in South Korea. For a single person, that allowance is about 19 million won, or $18,000 U.S. dollars.

A few defectors have so much trouble adjusting that they return to North Korea, Han said. A spokesman for the Ministry of Unification said there were no records available on how many defectors had returned to North Korea.