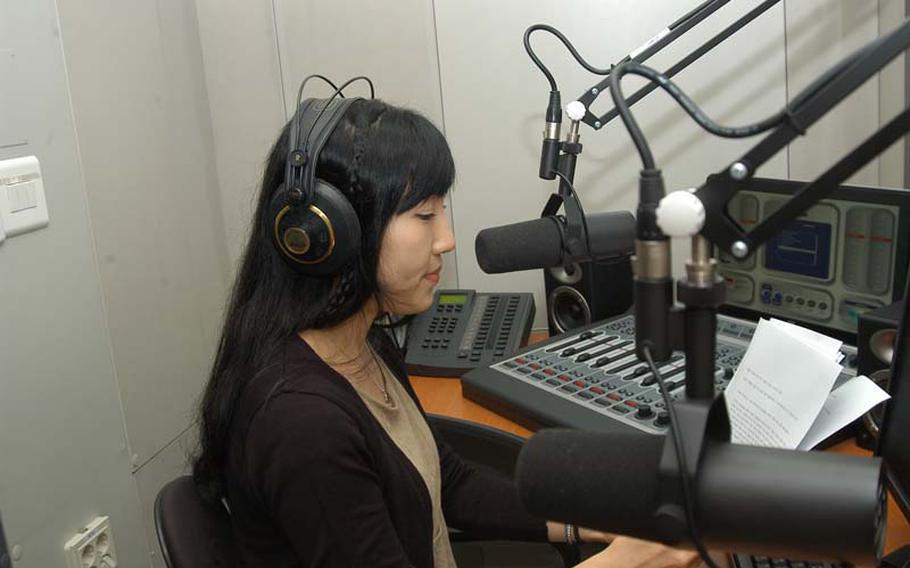 July 16, 2012 Radio Free Asia reporter Yejin Lee prepares for a recent broadcast in Seoul that would be beamed into North Korea. The broadcast company sends five hours of news and information into the North each day with the goal of educating North Koreans about their country and the outside world. (Jon Rabiroff/Stars and Stripes)

July 16, 2012 Radio Free Asia reporter Yejin Lee prepares for a recent broadcast in Seoul that would be beamed into North Korea. The broadcast company sends five hours of news and information into the North each day with the goal of educating North Koreans about their country and the outside world. (Jon Rabiroff/Stars and Stripes) July 16, 2012 Radio Free Asia reporter Yejin Lee prepares for a recent broadcast in Seoul that would be beamed into North Korea. The broadcast company sends five hours of news and information into the North each day with the goal of educating North Koreans about their country and the outside world. () 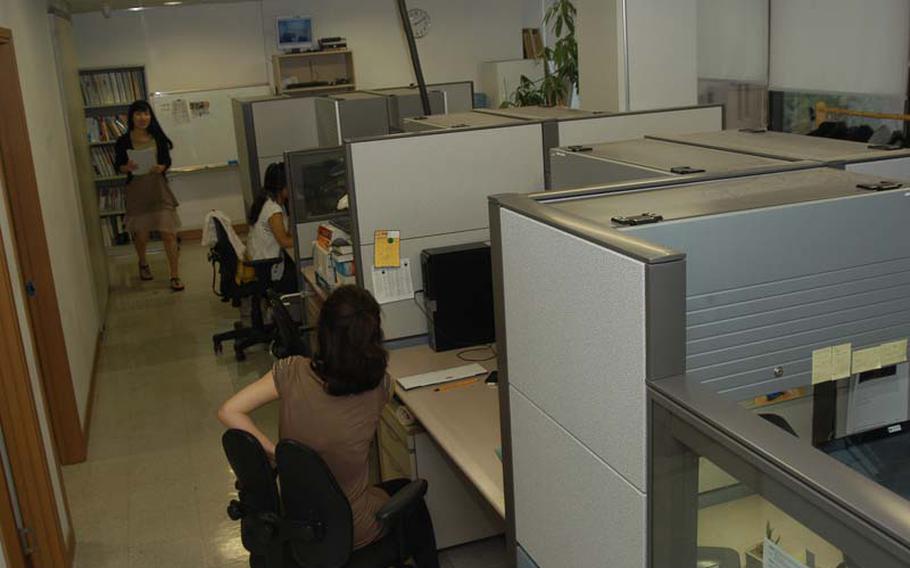 SEOUL &mdash; North Korea has a history of trying to keep its impoverished people from becoming restive by telling them that as bad as life there is these days, with widespread food shortages and other deprivations, things are much worse in the rest of the world.

It&rsquo;s a formula that has enabled the three-generation Kim dictatorship to retain absolute control since the end of the Korean War almost 60 years ago, thanks to rigid rules that are supposed to keep the populace tuned in to only government media, with the knowledge that a violation could mean a trip to one of the communist country&rsquo;s dreaded labor camps.

But just as East Germans managed to covertly listen to Radio Free Europe and other Western broadcasts during the Cold War, North Koreans &mdash; perhaps millions &mdash; appear to be learning that the outside world is much different than what their government has told them, thanks to about a dozen broadcast operations that transmit news to the increasing numbers of those brave enough to listen.

That exposure to news from the outside world is one of the main reasons given for the increasing numbers of defectors who risk their lives by the thousands each year to leave North Korea for a better life elsewhere.

Do Myeong-hak said he regularly risked a trip to the gulag by huddling in his home and listening to illegal radio broadcasts from the likes of Voice of America and Radio Free Asia.

But Do said he was fascinated by how different the information he got from the pirate broadcasts was from his government&rsquo;s &ldquo;propaganda&rdquo; about everything from the cause of the Korean War to the comforts enjoyed by South Koreans.

&ldquo;I had no choice but to conclude that North Korea was a frog in the well,&rdquo; Do said, referring to an idiom about an isolated frog who thinks he knows everything until visited by a turtle who says there is lots more to learn about the outside world.

How many North Koreans are like Do, trying to learn about that elusive outside world?

Evidence suggests significantly increasing numbers are getting news and information from sources outside the country, ranging from international broadcasts to smuggled digital media sold on the black market &mdash; South Korean soap operas and films on DVDs, MP3 and MP4 players and USB memory sticks.

One of the most comprehensive reports ever released about life inside North Korea &mdash; May&rsquo;s &ldquo;A Quiet Opening: North Koreans in a Changing Media Environment&rdquo; &mdash; concluded: &ldquo;A substantial portion of the North Korean population has access to outside media.&rdquo; The report, commissioned by the U.S. State Department&rsquo;s Bureau of Democracy, Human Rights and Labor, was based on surveys of, and interviews with, hundreds of North defectors.

Meanwhile, the North publicly acknowledged in April that an attempted satellite launch failed. Ambassador Robert King, the U.S. special envoy to North Korea, said that was evidence the regime knew it could not keep it secret from much of the population.

Others point to how often in recent months the government-sponsored Korean Central News Agency has posted responses to perceived slights from the outside world as evidence that officials there know many of its people are hearing anti-North news and opinion from outside their borders.

Peter M. Beck of Stanford University&rsquo;s Asia Pacific Research Center suggested in a 2010 Wall Street Journal article that the North Korean government was &ldquo;losing its monopoly on the control of information,&rdquo; with outside broadcasts &ldquo;undermining loyalty to the regime.&rdquo;

While there is no way to determine exactly how many North Koreans are listening to radio broadcasts being sent across their borders, those who broadcast into North Korea estimate that number has increased to anywhere from 15 percent to 30 percent of the population today.

&ldquo;Defectors cite foreign radio-listening as one of the leading motivations to defect,&rdquo; Beck wrote. &ldquo;That opens the door to the possibility that radio could play the same role in prying open North Korea that it did in Eastern Europe. The seeds of change are being planted.&rdquo;

The Voice of America and Radio Free Asia&mdash;both funded by the U.S. government&mdash;are perhaps the two most prominent organizations broadcasting into North Korea.

Both transmit five hours of programming into the hermit kingdom each day &mdash; primarily news reports focused on the North and the Korean Peninsula, with stories about international developments, commentary and analysis mixed in.

While people in South Korea might happen upon the broadcasts when conditions are just right, the best way for those outside of the North to listen would be through the two broadcast entities&rsquo; websites or via shortwave radio.

Representatives of Voice of America and Radio Free Asia insist their goal is only to educate North Koreans about what really is going on in their country and around the world.

&ldquo;We&rsquo;re not interested in promoting the overthrow of the regime in North Korea,&rdquo; said Lee Dong-hyuk, chief of Voice of America&rsquo;s Korean service. &ldquo;We are not engaged in any form of political goals or objectives.

&ldquo;We provide information,&rdquo; he said. &ldquo;A better informed citizen can make informed decisions about their fate, whatever direction they might want to go.&rdquo;

Max Kwak, Radio Free Asia&rsquo;s Korean service director, echoed that position, adding: &ldquo;The value of what we offer to the people of North Korea depends on its objectivity, accuracy and reliability. We believe our listeners in North Korea want the truth.&rdquo;

Free North Korea Radio, which broadcasts four hours a day, is one of several radio companies run by defectors that has more of a point of view. But officials there say their goals are the same.

&ldquo;Ours is psychological-operations broadcasting,&rdquo; Free North Korea Radio spokesman Kim Seong-min said. &ldquo;I believe it&rsquo;s very important to let North Koreans know that they are being cheated by their regime. They will have to decide the next step for themselves.&rdquo;

According to a variety of sources, radios distributed in North Korea are registered to their owners and locked on to government-authorized stations.

Those who listen to outside broadcasts do so primarily on government-issued radios that have been tampered with or on radios smuggled into the country. Defectors say punishment for those caught doing so is often banishment to a labor camp.

&ldquo;We are always concerned about the safety and well-being of our listeners who live under one of the most oppressive regimes in the world,&rdquo; said Radio Free Asia spokesman Rohit Mahajan.

The &ldquo;Quiet Opening&rdquo; report found that while some caught listening to illegal radio broadcasts were able to buy their way out of trouble with bribes, &ldquo;listening to foreign radio remains a dangerous activity.&rdquo;

&ldquo;Most foreign radio listening is done in the relative security and seclusion of night,&rdquo; the report said.

Son Jung Hun, a North Korean defector living in South Korea, said he was so concerned about getting sent to the gulags for listening to unauthorized broadcasts that he even kept it secret from his wife, telling her he was listening to music on his earphone.

&ldquo;If a guy gets divorced &hellip; and if the wife then tells people her husband listened to foreign broadcasts, it would not be a good situation,&rdquo; Son said. &ldquo;I didn&rsquo;t want to risk such a situation, so I never told her what I was listening to.&rdquo;

Son said foreign broadcasts confirmed what he already suspected, that much of the information coming from his government was &ldquo;fictional, hypocritical and lies.&rdquo;

Kim, of Free North Korea Radio, said there is no question that foreign radio broadcasts are the main reason most defectors leave the North.

&ldquo;If they knew nothing about the outside world, no one would want to escape from the North,&rdquo; he said. &ldquo;North Korean textbooks say theirs is the most superb socialist system in the world. They show South Korean men committing suicide &hellip; and African children starving to death.&rdquo;

Supporting the idea that more North Koreans are gaining an awareness of the outside world from foreign media, statistics show the number of defectors making their way into South Korea has increased dramatically in recent years.

In the 1990s, the number of North Korean defectors moving to South Korea never topped 100 in any year, according to the South&rsquo;s Ministry of Unification. That number climbed steadily each year, from 312 in 2000 to 1,898 in 2004.

Over the past five years, the annual number of defectors has ranged from 2,401 to 2,914. There are now about 24,000 North Korean defectors living in South Korea, a ministry spokesman said.

Kwak and Lee look forward to a day when their jobs will become obsolete but don&rsquo;t expect it to be anytime soon.

&ldquo;An increase of options could put pressure on the regime to be more forthright, but we anticipate our role at [Radio Free Asia] in providing the North Korean public with the latest news will continue for some time,&rdquo; Kwak said.

Lee said, &ldquo;Eventually, what we want is North Korea to no longer need [Voice of America] Korea.&rdquo;