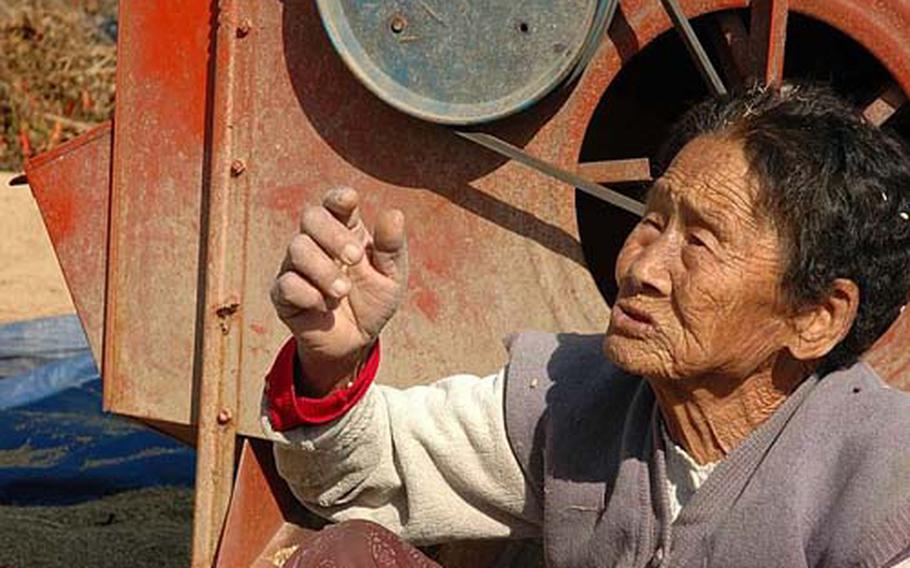 This woman, who was threshing rice, remembers helping to bury eight South Korean soldiers on a nearby hill. She says no one ever came to claim them. She also says it may have been 13 soldiers. (Teri Weaver / S&S)

The paperwork inside each case file shows its age. Decades ago, a typewriter plucked out the names and ranks. Over time, a mimeograph machine streaked across the shoe sizes and blood types, signs from a copying system that faded away more than a generation ago.

Nearly six decades after the cease-fire, 13 servicemembers and civilians try to make sense of the sparse clues: Maps, files from the National Archives, memories from veterans.

And, for nearly two years now, they&#8217;ve been making trips to South Korea to walk through battle sites and interview farmers and residents to see if the military records match the village folklore.

"We end up having to go door to door, rice paddy to rice paddy, because you never know who has information," said Army Chief Warrant Officer 3 D.J. Meacham, who heads the Korean War office of the Joint POW/MIA Accounting Command out of Hickam Air Force Base in Hawaii.

In November, Meacham and the team rode through Hongcheon County at the edge of the Tae Baek mountain range in the northeastern part of the country. "We&#8217;re starting to get a lot of information from second generations, from the sons and daughters of people that were here during the Korean War," he said.

Seventy percent of the land is mountainous, and from 1950 to 1953, the Chinese, North Koreans, South Koreans and Americans fought and died among those ravines and ridges. On flatter ground, quick urban growth has covered up unknown graves.

The two Koreas technically remain at war, making it impossible to search for more than 5,000 U.S. servicemembers believed still missing in the North. The military estimates the rest are in South Korea and the Demilitarized Zone, the heavily guarded 155-mile long, 2.5 mile wide border where remains lie among the mines.

Despite the monumental task, Meacham and his team feel more dedication than frustration.

Some have been on the job nearly three years and have never been part of an investigation that has led to the return of a missing servicemember. The odds do little to dissuade them.

Some progress has been made, Meacham said. Shortly after the war and into the 1970s, the Army made trips throughout South Korea to gather remains. More encouragement came from 1995 to 2005, when North Korea gave the United States permission to look for remains on its land.

When that invitation was withdrawn, the Korean War office at JPAC found itself with a tiny staff and a country &#8212; South Korea &#8212; that had yet to be fully canvassed, Meacham said.

In 2006, Meacham took over the Korean War office in Hawaii and asked his staff to begin researching cases. The ones with the most information went to the top of the file. Witnesses were re-interviewed. Maps and grids were compared, and slowly a path formed.

Meacham brought 25 cases involving 139 lost servicemembers for a mission in October and November.

"We have a general idea of where most of our unaccounted for were last seen at," he said.

"We try to [interview] everybody," said Army Staff Sgt. Beau Dean, a military analyst who&#8217;s been with the team for more than two years. "You never know who might know something."

In Hongcheon County, the team includes a mix of services and civilians: four analysts, three of whom speak Korean, two explosives experts, a Navy corpsman, Meacham, and two South Korean drivers contracted through the U.S. military.

"We&#8217;ve been to all these houses," says Fransen, of Rochelle, Ill., pointing to the homes visible along a two-lane highway. Most of the villages are hidden, wedged into the hills and connected by one-lane roads that wend past aging, plastered houses and newly built American-style homes that people from Seoul use as weekend getaways.

The analysts and linguists leave the cars for the houses and fields full of rice, cabbage, squash, hot peppers and memories. The interviews are simple. Marine Sgt. Jared Koser, 22, of Brookfield, Wis., asks repeatedly in Korean: Have you ever seen any remains of Americans since the war?

The answer, almost always, is no.

But those old enough often launch into their own stories, recalling within seconds the flight path of bombers, the camp locations of the Americans, the efforts taken to bury a Chinese soldier.

Occasionally, the stories involve a rumor of a grave containing a foreigner. In one instance, a farmer stops stocking his truck full of cabbages and spends more than an hour with the team. He leads them across a rice paddy and up a small hill to the site of a mounded grave.

"This looks too nice for an American grave," Meacham says.

The man, smoking and growing irritable, swears that he heard the grave contained a foreigner. He says an older lady living nearby may know more. He points the way, then leaves.

The stories often change as the searches go on, in part because the local residents don&#8217;t want to appear to be leading the team astray, says Army Sgt. 1st Class Edward Chang Pak, a Korean linguist who was born in Daegu and immigrated to the United States more than 20 years ago.

Sometimes, he says, it&#8217;s hard to get the villagers to talk about any American remains.

Farmers like Kim Byeong-rye make it clearer. Kim, 69, has lived his whole life in Taesungdong, the village that sits in the middle of the DMZ. When the team went there seeking information about a missing pilot, Kim offered what he saw &#8212; a plane crash in the fall of 1952 when he was 13.

"I feel like going back to the past, when I was very close to death from airstrike fire," he said through a translator, recalling that his youth kept him from being conscripted by the North Korean military. "Even thinking about it is so dreadful."

But Kim said he was touched by the team&#8217;s work, and he hoped his story would help. It might in the future, and Meacham takes the information for further research. But for their immediate search, it proves a dead end. Meacham was looking for a plane and pilot that went down in March 1951.

The story at the mounded grave ends much the same. The team finds the older lady less than half a mile away, cleaning garlic outside her home. The grave was made before the war, she says, and contains a local resident. The group thanks her and moves on.

False leads are part of the mission, team members say, and they rarely think twice about them.

But when a real lead stops cold, real frustration sets in.

The next morning, the group&#8217;s first stop in Hongcheon County is with a man who learned of a burial from his friend. The friend found an American shortly after the war, and he reburied the servicemember a few yards from a small creek.

Over the years that creek was widened, and in the 1960s, a flood washed out the area. The soldier, it seems obvious, washed away too.

But the friend who did the burying kept the dog tags. He also died four years ago.

"Knowing our luck, that&#8217;s probably our guy," Meacham says. The case file matching the area shows only one servicemember missing.

For a few days, a little hope remains. The deceased friend&#8217;s widow lives nearby in a home jammed with decades&#8217; worth of farm equipment, plastic containers, furniture. The man says maybe the dog tags are in there, and he promises to check with her and call the team back.

Overall, the odds are against the team. During the 42-day mission, team members interviewed nearly 1,300 people. At the end, three leads proved promising enough to recommend for the next stage: excavation.

Dean, the Army staff sergeant, has been coming to South Korea for two and a half years. In that time, he&#8217;s seen hundreds of residents and reviewed dozens of cases. So far, none of the work has come close to identifying a specific soldier.

The stats do little to dissuade him. Early next year, Dean, 24, of Melbourne, Ark., is planning to apply to the Army&#8217;s warrant officer program so he can put in for permanent assignment as an analyst with JPAC.

"I wanted a special assignment," Dean said of his options before coming to JPAC. After he learned more, he was hooked.

Others in Hongcheon County seem to feel the same. When the team stops to talk to a man cutting cabbages, he shares his memories about napalm and burying a Chinese soldier he found on a nearby hill. His wife comes outside and joins him, and neither seem in a hurry to get back to work.

The farmer has nothing to offer about American remains, but he takes a pamphlet from the team eagerly. He says there&#8217;s a party next week in the village with residents from his generation.

He promises to take the pamphlet and see what his neighbors have to say.