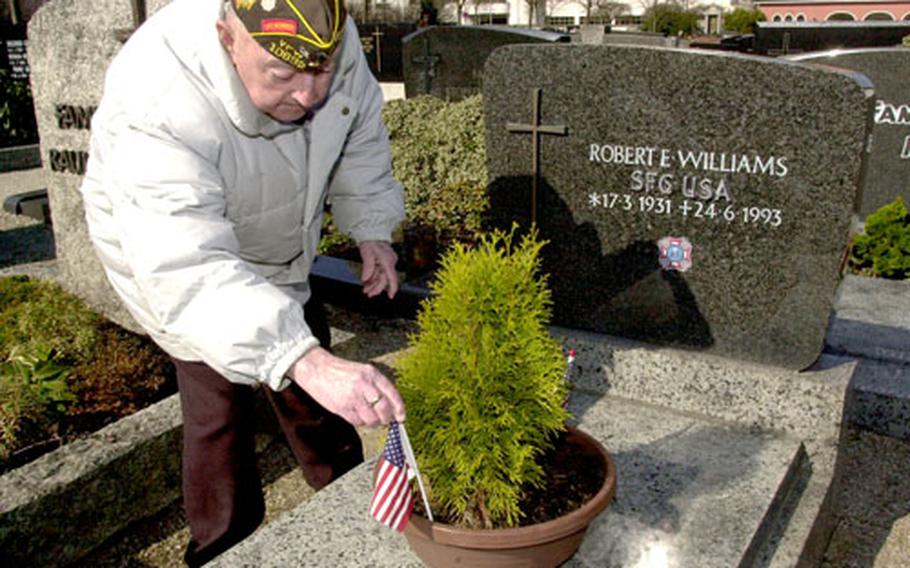 But the World War II veteran is still fighting for his brothers in arms. Next week the 80-year-old former soldier and sailor will stand for re-election as chaplain of his local Veterans of Foreign Wars Post &#8212; a position he has fulfilled with great dedication.

McCarthy served on the USS Indianapolis in World War II. He was ashore in the Philippines when it was hit by a Japanese torpedo and went down, becoming the last capital ship sunk in the war. He joined the Army in 1950, fighting in the Korean War with the 3rd Infantry Division before moving to Grafenw&#246;hr in 1960.

The Brooklyn, N.Y., native married a local girl and has lived here ever since, apart from a brief trip back to the U.S. to retire in 1965.

When he helped found the VFW&#8217;s Tower Post, number 10692, in 1983 he had already been living in Grafenw&#246;hr for 23 years. Every week since then he has visited the graves of 11 U.S. soldiers, mostly Vietnam and Korean War veterans, buried in the town cemetery alongside their German wives, and German soldiers the U.S. once fought.

On Friday morning during a visit to the cemetery he replaced a flag on the grave of his former best friend, Sgt. 1st Class Robert Williams, who died in 1993 at age 62.

McCarthy picked up a piece of litter from the nearby grave of Capt. Earlin Wesley, who died in 1979, at age 56. The former recreation program manager, who ran the Rod and Gun Club, bowling alley and golf course at Grafenw&#246;hr, served with McCarthy in Korea with the 3rd ID and was best man at his wedding, McCarthy said.

The Grafenw&#246;hr VFW chaplain&#8217;s other duties include visiting sick soldiers at local hospitals, attending Memorial Day and Armistice Day services on-post, and attending the German veterans&#8217; ceremony at their war memorial next to the local Rathaus.

The Tower Post VFW meets the second Tuesday of each month at its headquarters in what was once the town of Grafenw&#246;hr&#8217;s movie theater.

Although the post has about 300 members including many soldiers who recently returned from Iraq, only about 20 turn up at meetings, McCarthy said.