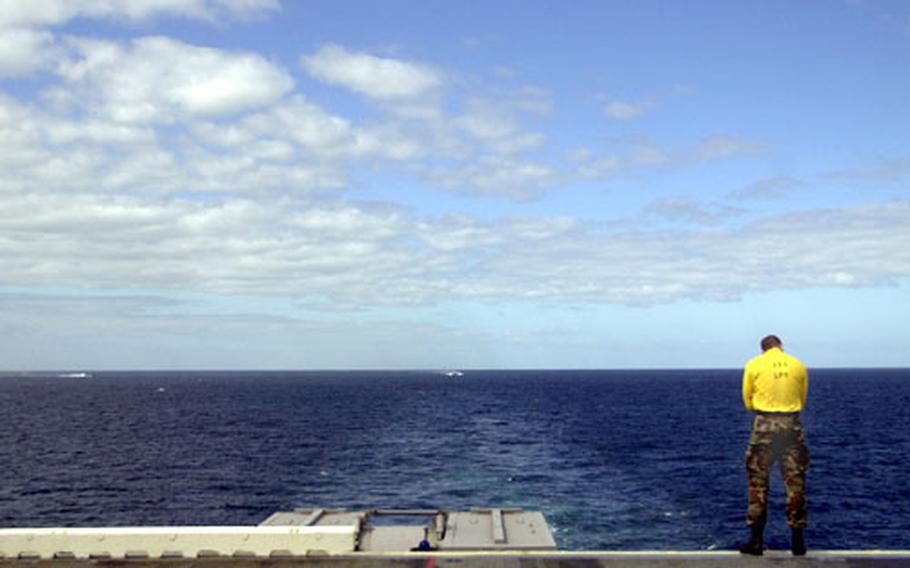 A sailor aboard the USS Bataan stands on the edge and takes a look at the Arabian Sea from the back of the ship. Because of security concerns, sailors are seeing a lot more water and a lot less ports as the Navy cuts down on the number of port visits. (Scott Schonauer / S&S)

ABOARD THE USS BATAAN &#8212; Some sailors join the Navy to see the world, but many aren&#8217;t seeing much more than water these days.

Capt. Earle Yerger, the commanding officer of the Bataan, said things are loosening up a little now, but the visits are fewer than he would like.

The Bataan has deployed three times since the Sept. 11, 2001, attacks against the United States, but it has made only four port calls. Five years ago, ships might make 16 to 18 port visits to places such as Turkey, Egypt and Italy on a single, six-month deployment through the Mediterranean Sea.

Last year, the Bataan went 147 straight days &#8212; a record for an amphibious assault ship &#8212; before pulling into Lisbon, Portugal, on the way back to Norfolk, Va.

This trip, the ship will visit two undisclosed spots on the way home from its three-month deployment to drop off Marines in the Persian Gulf.

Petty Officer 3rd Class Chris Grimes, 39, of Delcambre, La., understands that the mission should take precedence, but he would like the opportunity to see different people from across the globe.

The ship had a long list of places to stop during its scheduled deployment in 2001, but the attacks changed everything.

The Navy used to market itself by the places ships visit, running commercials with sailors smiling from exotic places. Now, the Navy&#8217;s slogan is &#8220;Accelerate Your Life&#8221; to match the higher pace.

Before the war on terrorism, commanders worried about sailors going to a bar and getting drunk. Now, safety at a foreign port is the biggest concern.

Force protection requirements can also put so many sailors on security duty that only a small fraction would be able to enjoy port visits.

But commanders and veteran chief petty officers said it would be a shame if port visits became a thing of the past.

&#8220;I hope not,&#8221; Yerger said. &#8220;Because that was one of the neat things about being in the Navy, was going to the different places and seeing how other people live. It really is one of the things that drives home an appreciation for the United States.&#8221;