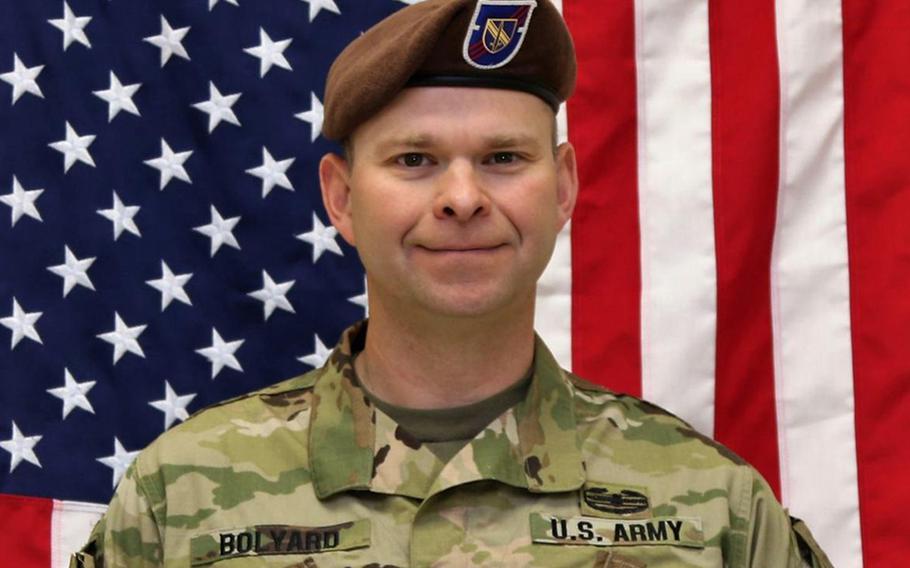 Command Sgt. Maj. Timothy A. Bolyard was identified as the soldier killed in an insider attack in eastern Afghanistan on Monday, Sept. 3, 2018. (U.S. Army )

Command Sgt. Maj. Timothy A. Bolyard was identified as the soldier killed in an insider attack in eastern Afghanistan on Monday, Sept. 3, 2018. (U.S. Army ) 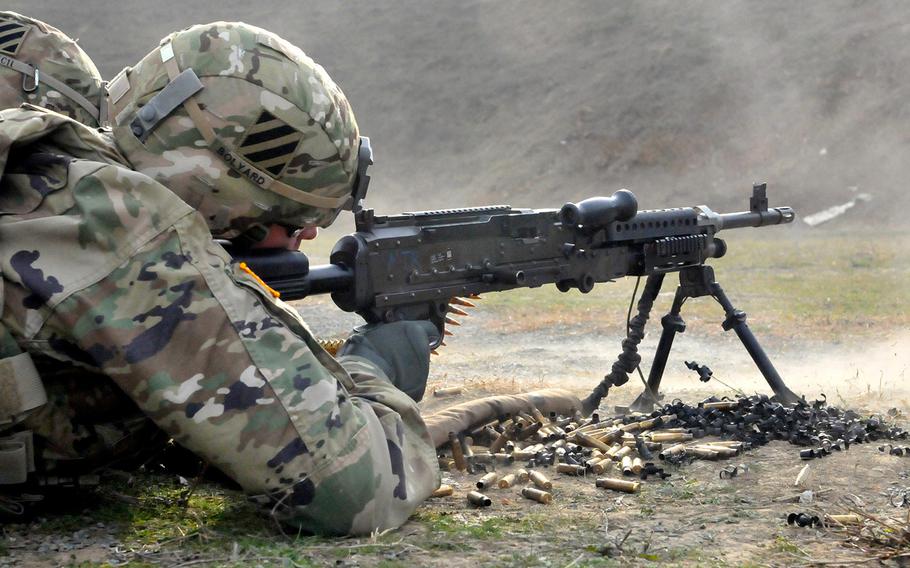 Then-Sgt. Maj. Timothy A. Bolyard, of 5th Squadron, 7th Cavalry, fires an M249 squad automatic weapon at MK Air Base in Romania on Nov. 18, 2015. Bolyard was identified as the soldier killed in an insider attack in eastern Afghanistan on Monday, Sept. 3, 2018. (10th Press Camp Headquarters)

KABUL, Afghanistan — Command Sgt. Maj. Timothy Bolyard, who was killed in an apparent insider attack on Monday, had a calm demeanor and a gift for seeing what needed to be done in a difficult situation, fellow soldiers said.

Nathan Metcalf, who served under Bolyard in 4th Squadron, 10th Cavalry Regiment, 4th Infantry Division, recalled an awful moment in Baghdad, where the unit was deployed from 2007 to 2009. An explosion rocked the guard tower Metcalf and his troops were manning and a firefight broke out.

Bolyard was among the troops, making sure everything was all right, Metcalf recalled. When the shooting stopped, Bolyard’s first sergeant’s mind seemed to shift gears, looking ahead to what came next.

“The action is over now, Sgt. Metcalf, I will give you the steps you need to follow to take care of your soldiers,” Metcalf remembers Bolyard saying.

Bolyard, 42, of Thornton, W.Va., died of wounds he suffered in the Monday attack in Logar province. He received six Bronze Star Medals — including two for valor — during a 24-year career and seven deployments, the Defense Department said.

He was a senior noncommissioned officer in 3rd Squadron, 1st Security Force Assistance Brigade, at Fort Benning, Ga., according to a Pentagon statement. The unit deployed to Afghanistan earlier this year to train the country’s security forces.

Bolyard was shot by an Afghan policeman after a meeting at Camp Maiwand, an Afghan installation, a U.S. military spokesman said. The police officer fled the scene immediately after the shooting but was captured and detained by the security forces.

Army 1st Sgt. Brad Lee, another soldier who served with Bolyard in 2014, said Bolyard had mentored him as he rose through the ranks.

“He genuinely cared. I truly loved the man. He was one of my heroes,” he said.

“When my battalion got extended in 2014, he walked up and asked how I was doing,” he said. “Told me there were some things he couldn’t share, but he thought it would be OK, and then he put his hand on my shoulder and said to make sure my boys were ready.”

Bolyard’s son, Preston, said on Facebook that his father had been planning to return from deployment and retire in less than two months.

The elder Bolyard arrived in Afghanistan in February.

Bolyard, the sixth U.S. fatality in Afghanistan in 2018, is the second U.S. servicemember killed in a suspected insider attack this year. It follows an incident in July in Uruzgan province that left Army Cpl. Joseph Maciel dead and two other servicemembers wounded.

In 2017, a total of six insider attacks targeted U.S. personnel, killing three Americans and wounding 11, according to Pentagon reports to Congress.

“Command Sgt. Maj. Tim Bolyard was an outstanding, caring leader who our soldiers deserved and his loss is immeasurable,” said U.S. Army Brig. Gen. Scott Jackson, 1st SFAB commander, in a statement. “We will honor his legacy and care for his family as we remember that he died doing what he loved, surrounded by the soldiers he loved.”