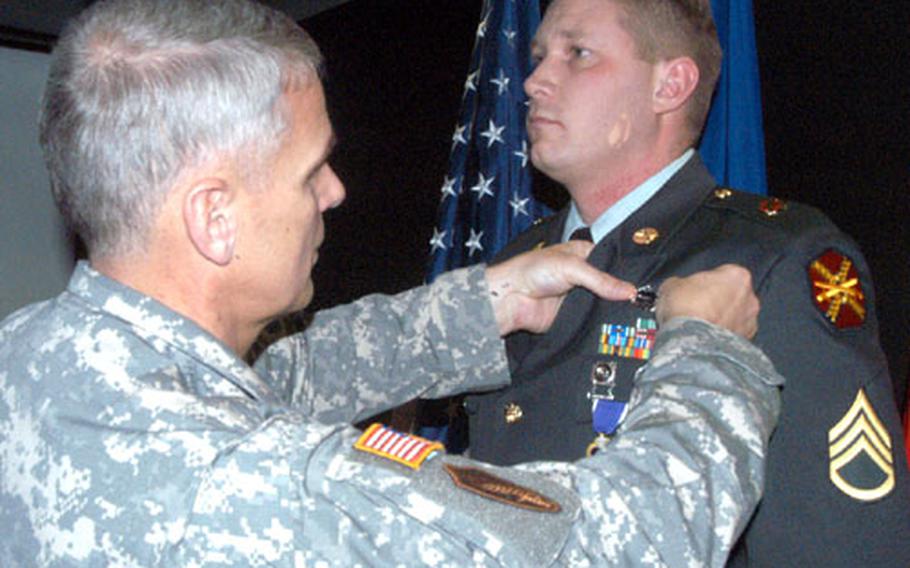 STUTTGART, Germany &#8212; Staff Sgt. John Moyle felt a little funny standing up there all by himself, in a fancy room at the U.S. European Command headquarters, after getting medals pinned on by a three-star general.

The humble hero, Moyle, while with the 554th Military Police Company, was presented Wednesday with a Purple Heart, Army Commendation Medal and Combat Action Badge.

Moyle&#8217;s acts included reaching into a burning Humvee in May 2004 and pulling out his unconscious gunner, who lived. Five weeks earlier, the Sunbury, Pa., native tended to two wounded soldiers during an ambush while directing the rest of his charges to assume defensive positions and lay down suppressive fire.

Those were two of 14 engagements with the enemy that Moyle experienced during his four-month stay in Iraq, before second-degree burns and shrapnel wounds landed him at Landstuhl Regional Medical Center.

Reaching into the burning Humvee wasn&#8217;t a natural act, Moyle said. It came from team-building, something he said he stressed to the young privates and specialists he commanded.

The ceremony at EUCOM headquarters on Patch Barracks was short and dignified. Lt. Gen. Colby Broadwater III did the honors of pinning the medals, and thanked Moyle for being invited to participate.

Then a greeting line formed, hands were shaken and hugs given.

Moyle in his brief remarks said that heroes are happening every day in the war in Iraq. A lot are being treated at Landstuhl, and he encouraged the onlookers to visit there, not because they had to but because they wanted to. The troops there notice who cares, he said.

Since building a good team is so important to him, Moyle said that to receive an individual honor felt a little misleading.

Fighting with and for his men and perhaps saving a life, Moyle said, was as much for himself as for the others.