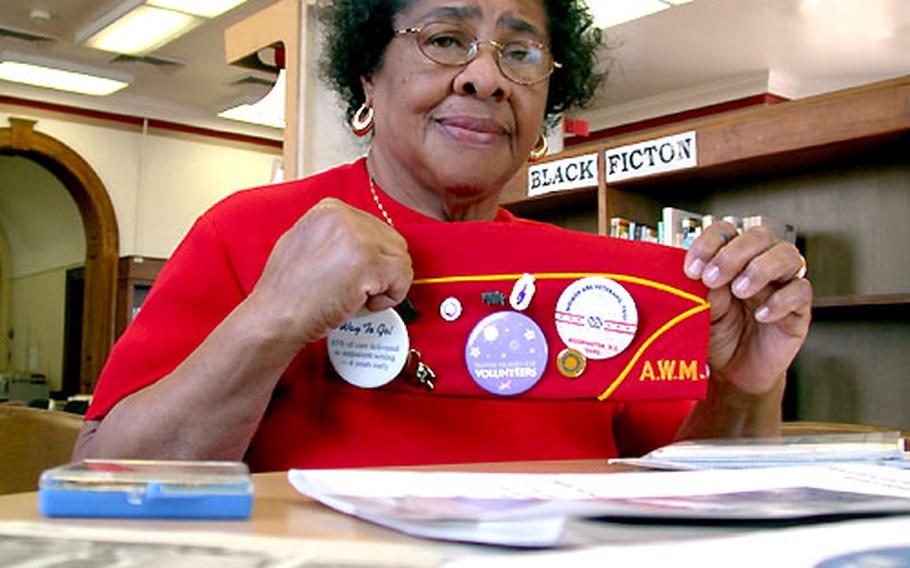 The only “uniform” of the members of the American War Mothers organization is a red cover trimmed in gold — a hat they wear with extreme pride, said Virginia Fleet, working to get mothers of today’s servicemembers to join the organization. (Sandra Jontz / S&S)

Their message is quite simple, says Kate Hearn, national president of the fading American War Mothers organization. Their cause, noble.

&#8220;It breaks my heart to see the organization dwindling,&#8221; said Fleet, 75, a mother of six, two of whom served in the military. &#8220;It makes me feel sad. It seems young people today don&#8217;t have the same sense of patriotism we had. They might be patriotic in a sense, but it&#8217;s not the same. It seems to me that this is the time, with our military overseas about to fight a war, this is the time that we mothers should do whatever we can.&#8221;

American War Mothers was organized Sept. 27, 1917, by mothers who volunteered to help the wounded, not just their sons, of World War I. It was chartered by Congress on Feb. 24, 1925, and now falls under the Department of Veterans Affairs.

World War I mothers would fly or hang Blue Star flags in their homes indicating a child was serving in the military.

When that blue star was replaced with a gold one, it meant that child had been killed in combat. On Jan. 5, 1929, with 65 charter members, the offshoot organization American Gold Star Mothers Inc. was born.

What it is, they said, is about heart, healing and helping.

Their missions are many, the women said.

War mothers visit veterans in hospitals, knit slippers for some, assemble shaving kits for others, clip coupons for families stationed overseas to use in commissaries, console mothers of deployed troops, visit wounded servicemembers in hospitals. The list goes on, Fleet said.

And in Washington, at noon every day, the members stop whatever they&#8217;re doing, wherever they might be, to say a prayer.

The two women have been receptionists, secretaries, mothers and wives.

&#8220;I would like for mothers to join and organize chapters in other states so the national president &#8230; will have someone to call when we need them, when military men are going to need them,&#8221; said Hearn, whose son, husband and three brothers served in the military.

&#8220;It&#8217;s these younger women, the ones who are between 40 and 60 years old, who have pretty good health and they can go and help out, in hospitals, convalescent homes, rehabilitation centers, or nursing homes. Anywhere where they might be needed.&#8221;

Fleet passes out pamphlets at churches, in libraries, legion halls &#8212; places around the nation&#8217;s capital that will let her post the literature.

Membership is limited to mothers who are U.S. citizens and whose children, be they natural-born, step- or adopted, either served honorably in the armed forces or are current members.