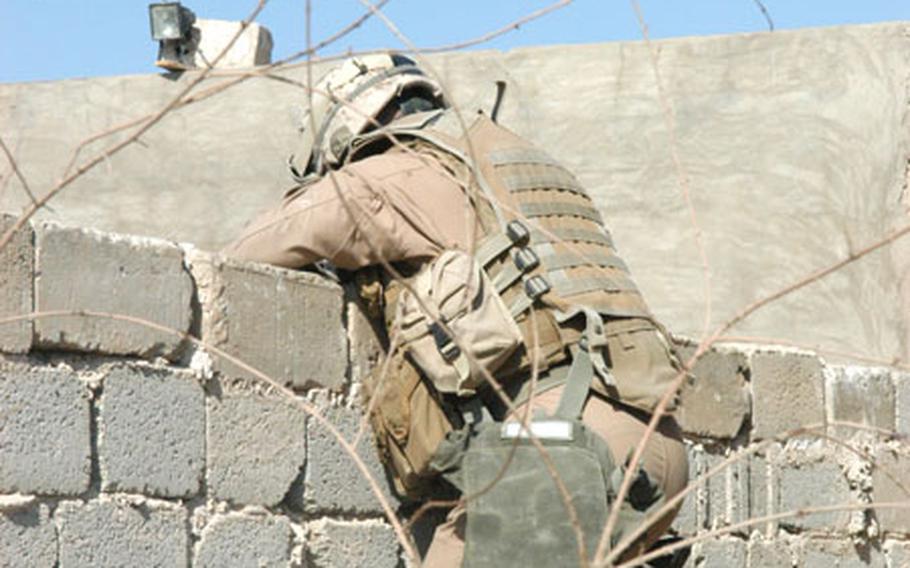 A gear-laden Marine tries to get over a wall in Karmah, Iraq, earlier this month. A decision on whether to allow Marines to ditch their helmets and other gear while on patrol in Anbar will be taken up by the incoming command of I Marine Expeditionary Force. The idea was first pitched earlier this year in light of improving security in the province. (By Geoff Ziezulewicz / S&S)

CAMP FALLUJAH, Iraq &#8212; A decision on whether Marines will be able to ditch their helmets and other pieces of body armor while on patrol is being put on hold until the next commander takes charge of forces in western Iraq next month.

In response to improved security in Anbar province, Marine Corps leaders last year broached the idea of letting unit commanders decide if their Marines could safely do their jobs without all the equipment that has been mandatory.

Mercer reiterated that, if approved by the incoming I MEF command, the proposal would be an option at the local level for unit commanders, not a requirement.

&#8220;The security situation in Anbar speaks for itself, but some areas are safer than others,&#8221; Mercer said.

A I MEF spokesman gave no timetable for when a decision might be reached.

In an August interview with Stars and Stripes, Lt. Col. Kelly Alexander, who commanded the Regimental Combat Team-2 that oversaw western Anbar, said the option would mean less weight for Marines to lug around. It would also foster better relations with the locals.

RCT-2 handed over authority of its area to RCT-5 earlier this month.

At Camp Fallujah, many Marines are finishing up their deployment with RCT-6, which will transfer authority of eastern Anbar to RCT-1 in the coming weeks.

Lance Cpl. Travis Morris, deployed with RCT-6, said this week that most Marines would likely appreciate a decrease in the amount of gear they have to wear, but that &#8220;there&#8217;s always a danger.&#8221;

An RCT-6 officer, who did not wish to give his name, flatly said he did not support such an initiative.