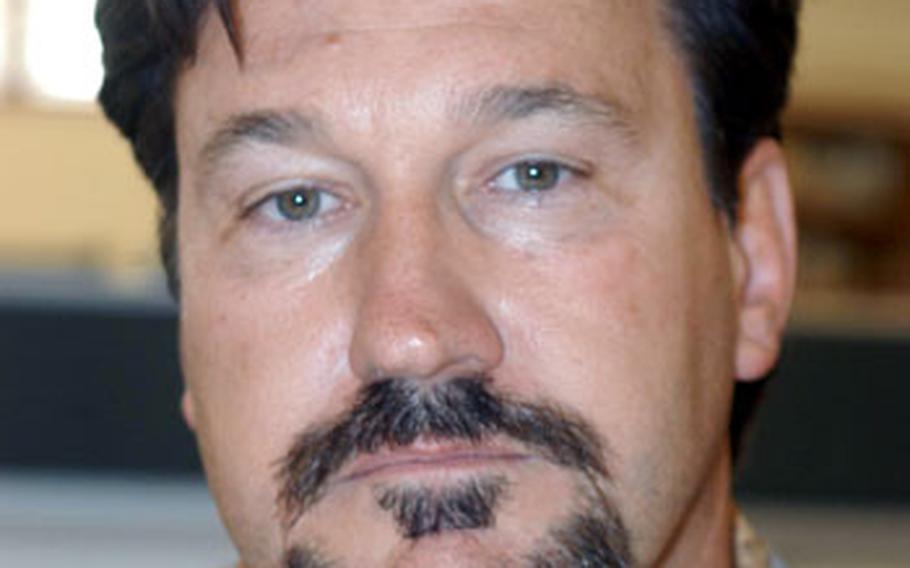 Marvin Sessions, a U.S. history teacher to eighth-graders and world regions to ninth-graders, was told by Vicenza High School officials that he will no longer have a job after June 10. (Kent Harris / S&S)

VICENZA, Italy &#8212; A decision not to retain a first-year teacher at Vicenza High School has angered dozens of parents and prompted a series of protests by students.

Marvin Sessions, a former Marine who teaches U.S. history to eighth-graders and world regions to ninth-graders, has been told by the school that he will no longer have a job after June 10 &#8212; a few days before the current school year ends.

Frank O&#8217;Gara, a spokesman for the Department of Defense Dependents Schools-Europe, said DODDS takes pride in the relationships it has between schools and communities throughout Europe. But he said retaining employees is not based on a popularity contest.

&#8220;The standards that students and parents might use to evaluate a teacher are not always aligned with the standards in which a principal evaluates a teacher,&#8221; he said.

In an interview last week, Sessions said he believes he is being let go because of a personality conflict.

He said he didn&#8217;t have any problems with evaluations until an incident in March. In fact, he displays paperwork with positive remarks and approval to attend a workshop in Washington that would allow him to teach an honors history class next year.

The March incident dealt with whether a couple of players on the boys soccer team &#8212; of which he was the coach &#8212; had received physical exams and been given medical clearance to practice. Sessions claimed they had, and other coaches and players&#8217; parents came to his defense.

After that, the job assessments began to get negative, Sessions said.

Principal Kathleen Reiss, who made the decision not to retain Sessions, referred all questions to O&#8217;Gara or Mediterranean District Superintendent Thomas Ellinger.

O&#8217;Gara said he could not discuss the specifics of any individual case.

In e-mails and during interviews with Stars and Stripes, parents and students are questioning the move.

A dozen parents interviewed Thursday said they were frustrated not only by the decision, but also with DODDS&#8217; disregard for their input and that of their children.

Students started a series of protests, said Janine Smith, whose daughter has Sessions as a teacher.

O&#8217;Gara said administrators have listened to students and parents.

The decision to let Sessions go is possible because he&#8217;s serving a one-year probationary period, O&#8217;Gara said. He did say, however, that Sessions is one of six teachers on probation across Europe who won&#8217;t be asked back.

O&#8217;Gara said DODDS has &#8220;an established system of performance elements and standards, just as any federal agency is required to. Teachers are paid to do a job, and that job specifically is to deliver quality instruction in the classroom to our students.&#8221;

Parents of older high school students, who haven&#8217;t had Sessions in class, also have gotten involved because their sons played for him on the football team. Vicenza, with one of the smaller enrollments in DODDS, won a few games this year with Sessions in charge. That&#8217;s more than they&#8217;ve won in several years.

She said even after a loss this year, their self-esteem was better.

Since learning of Sessions&#8217; pending departure in late April, students have engaged in a number of protests in school. They&#8217;ve worn similar clothing in a sign of unity, spent the lunch hour standing outside the school, staged a cafeteria sit-in and circulated a petition with more than 100 signatures &#8212; which would represent a majority of the school&#8217;s population.

&#8220;Once I knew I wanted to be a teacher, my next goal was to be a DODDS teacher,&#8221; he said. That&#8217;s because he grew up in military communities. His father retired after 20 years in the Army and he retired from the Marines before going into the Troops to Teachers program and taking his first job in Missouri.

Because he&#8217;s a first-year teacher, Sessions doesn&#8217;t belong to one of the teachers unions in Europe and has no right of appeal in the system. He said he&#8217;s filed an Equal Employment Opportunity complaint, an option Reiss gave him in the termination papers she delivered in April.