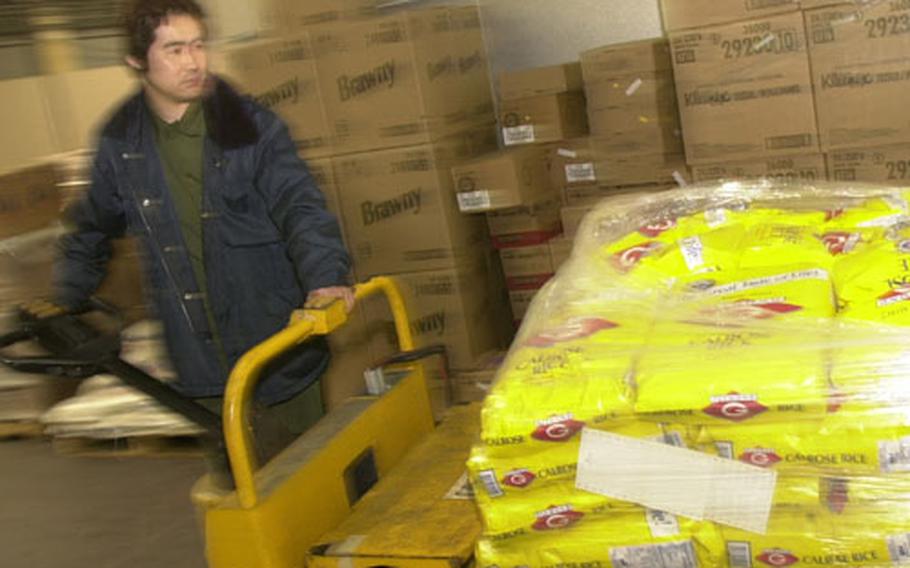 CAMP FOSTER, Okinawa &#8212; It&#8217;s business as usual at the exchanges and commissaries on U.S. bases in Japan and South Korea.

The war in Iraq is not expected to affect the flow of supplies to the stores and no shortage of food or other goods is anticipated, officials say.

&#8220;There is no indication of any present or future disruption to product availability in any of our commissaries in the Pacific or stateside,&#8221; said Tom Kinsey, the Defense Commissary Agency&#8217;s Western/Pacific Region director, in a written response to a query.

&#8220;We communicate with our distributors on a daily basis and there is sufficient product available. The ports are open, fully operational, and functioning in their standard manner.

&#8220;Throughout the agency, to include our Pacific stores, we continue to operate at a heightened sense of safety and security,&#8221; he said. &#8220;But ordering, distribution, receiving and shelf stocking is occurring as normal. Our customers can expect to continue to see full shelves every time they shop.&#8221;

&#8220;No special steps have been taken to assure the availability of goods,&#8221; said Air Force Master Sgt. Howard Smith, a public affairs spokesman for the Army and Air Force Exchange Service&#8217;s Pacific Rim headquarters on Okinawa.

&#8220;We are experiencing no shortages or delays in the shipment of goods from the United States,&#8221; Smith said. &#8220;We are using our normal distribution channels and have experienced no disruption because of the war.&#8221;

He said he received some phone calls before combat began from customers concerned about the war affecting the supply of goods in the stores.

&#8220;They wanted to know when we were going to close,&#8221; he said, adding that he told them he expected no increased force-protection measures that would shutter the stores. But rumors to the contrary caused a run on some commissaries and exchanges.

Comrardy said he hopes to allay customers&#8217; fears this time around.

He said he keeps a 30- to 60-day supply of goods in storage, adding quickly that he&#8217;s heard nothing from DECA&#8217;s Western Pacific Headquarters in California concerning shortages elsewhere in the region.