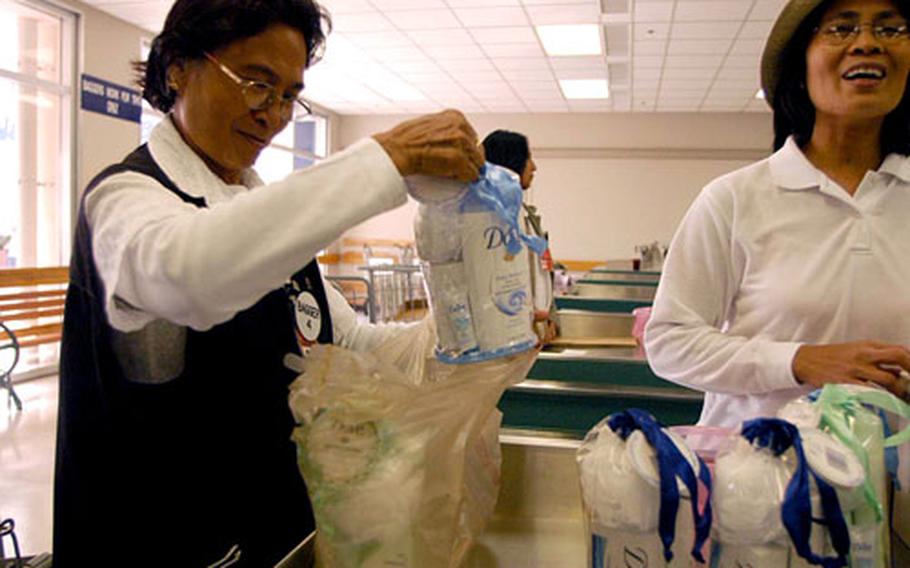 Rosa Rafael helps a customer Thursday at Yokosuka Naval Base’s commissary in Japan, where double-bagging is done only by request. (Allison Batdorff / S&S)

YOKOSUKA NAVAL BASE, Japan &#8212; No more automatic double bagging for form&#8217;s sake: Your local commissary is stuffing the practice.

If you want two bags to swaddle your salmon steak, you must ask for them.

&#8220;Our commissaries will have to put forth a renewed effort to control costs so they do not have to cut services,&#8221; Scott Simpson, DECA chief operating officer, was quoted in a news release as saying. &#8220;We want to see double bagging and the use of plastic bags in stateside commissaries drop as much as absolutely possible.&#8221;

Stateside commissaries already have switched to paper bags except in the express lane or when customers specifically request plastic. But paper&#8217;s weight makes it unaffordable to ship for overseas commissary use, said DECA spokeswoman Bonnie Powell.

This doesn&#8217;t mean your bananas should bite the dust if they tear through a bag. In fact, double bagging is a downright necessity in some situations.

That&#8217;s especially true in the Pacific, said DECA West spokeswoman Nancy O&#8217;Dell, where &#8220;we more frequently find shoppers walking, riding the bus or taking a taxi to and from the commissary. In these circumstances, if the groceries are heavy, double plastic bags are used to keep the groceries secure until the shopper reaches their destination. But again, if the double bagging is not necessary, we ask our customers to say &#8216;no&#8217; to double bags.&#8221;