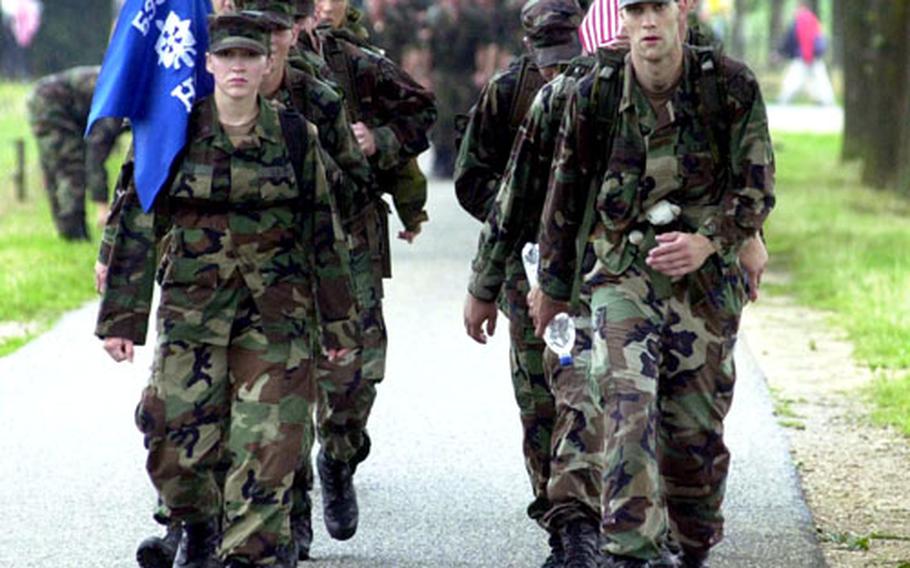 Members of the 66th Military Intelligence Group from Darmstadt, Germany, march through the Dutch country-side in a previous International Four Days March of Nijmegen. This year’s edition was cancelled after the first day of marching due to the heat. (Michael Abrams / S&S)

The International Four Days Marches event in Nijmegen, Netherlands, was canceled after one day following the heat-related deaths of two marchers on Tuesday.

It was the first time the event has been canceled for anything other than a world war.

&#8220;With great regret we have decided last night to cancel the 90th Four Days Marches,&#8221; Wim Jansen, chairman of the organization that runs the marches, wrote in a letter posted Wednesday on the event&#8217;s Web site.

The names of the two dead marchers have not been released. A press release from the public affairs office at the U.S. Army base in Schinnen, Netherlands, said all U.S. personnel taking part in the march were accounted for, and that none were seriously ill or injured. About 300 U.S. personnel were participating in the event, which began as a military training exercise in 1909.

Of 19 U.S. military teams that competed, seven completed the first day&#8217;s march in the required time, said Laurri Garcia, a spokesman for U.S. Army Garrison Schinnen. Only three of those teams finished the day without having a team member drop out.

&#8220;Because the temperatures rose steeply in the second half of the afternoon, hundreds of people became sick,&#8221; Jansen wrote, referring to Tuesday&#8217;s march. Weather forecasts called for the heat wave to continue, prompting organizers to pull the plug on the event after one day on the trail.

Both marchers and spectators were struck by heat-related illness as the temperature climbed to 95 degrees Fahrenheit by Tuesday afternoon. Media reports from the Netherlands reported 30 people were admitted to the hospital, one in critical condition.

Roughly 44,000 people showed up on Tuesday to walk one of three routes, the longest of which snaked for 31 miles through scenic Dutch towns.

Of those who started, 1,012 failed to complete the first leg of the four-day event, which was about average for the first day, said Andre Sonn&#233;ville, a spokesman for the march.

Jansen said the heat had imposed a strain on medical services, which organizers feared would be unable to guarantee the safety of walkers if the marches continued.

Organizers removed markers showing the route marchers would have followed during second day of the event and urged disappointed participants not to continue walking.

The march is one of the biggest events in Netherlands, and this year drew a crowd of more than a million to the city of Nijmegen, which has a resident population of about 160,000. Most of the visitors showed up to take part in the festivities that go along with the marches. Those festivities will go on, said Sonn&#233;ville.

Two people died from the heat during the marches in 1972, but this is the first time the march has been called off since it began in 1909, with the exception of breaks during World Wars I and II, when the event paused for a total of seven years.