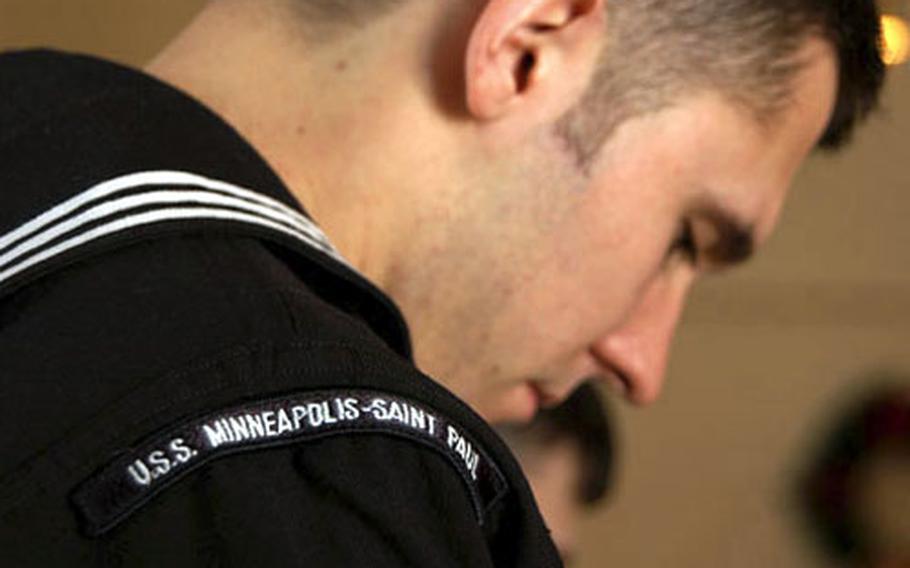 The deaths of two sailors who were swept overboard a submarine on which they served are the first such fatalities in six years, according to one Navy official.

During that same time period, four other sailors who had fallen overboard were plucked successfully from the waters.

&#8220;Aside from the deaths on the Minneapolis-St. Paul, there have been no fatalities since [fiscal] 2000 involving submarine sailors falling overboard,&#8221; said April Phillips, a spokeswoman with the Naval Safety Center in Virginia.

On Dec. 29, Senior Chief Petty Officer Thomas Higgins, 45, and Petty Officer 2nd Class Michael Holtz, 30, were killed after they were washed from the deck of the USS Minneapolis-St. Paul during a fierce winter storm in Plymouth Harbor, England.

The incident still is under investigation, said Lt. Chris Servello, a spokesman with the Navy&#8217;s 6th Fleet/Naval Forces Europe.

British officials, who had been helping in the investigation, relinquished their involvement to U.S. officials, according to The Associated Press. &#8220;It has been decided, within the framework of the Visiting Forces Act, that the case will be handed to the U.S. authorities for the conduct of all further investigations,&#8221; the AP reported, quoting a statement from the Crown Prosecution Service.

The sailors&#8217; bodies will be sent this weekend to Landstuhl Regional Medical Center in Germany for an autopsy, and eventually returned to the States and to their families, Servello said.

Two other sailors, whom the Navy has declined to name because of privacy laws, suffered minor injuries after also being swept from the deck of the nuclear-powered submarine. They are rejoining the crew in Naval Station Rota, Spain, he said.

A memorial service was held Wednesday at Rota for the sailors.

The submarine, homeported in Virginia, entered 6th Fleet waters in October and current plans are to keep it in the Mediterranean for its deployment, Servello said. Generally, U.S. ships deploy for six-month tours.

A British police official has said that Higgins and Holtz were tethered close to the submarine, while the two surviving sailors either were not connected by safety ropes or had lines long enough that allowed them to float away from the vessel.

There have been three incidents in the last six years in which sailors have fallen overboard from submarines, Phillips said. In fiscal 2000, two line handlers were swept overboard. That same year, a sailor walking off a submarine while it was moored, slipped and fell into the water. In fiscal 2003, a sailor fell overboard while the submarine was executing small-boat operations.

No further details on the incidents were available.

It is standard practice to have topside sailors tethered to the submarine as well as wearing safety vests, said Lt. Cmdr. Chris Loundermon, a spokesman for Commander, Submarine Force, in Norfolk, Va.

As an added precaution, when sailors are topside on a submarine, Navy divers are fully suited up and ready to jump into the water if necessary, Loundermon said.