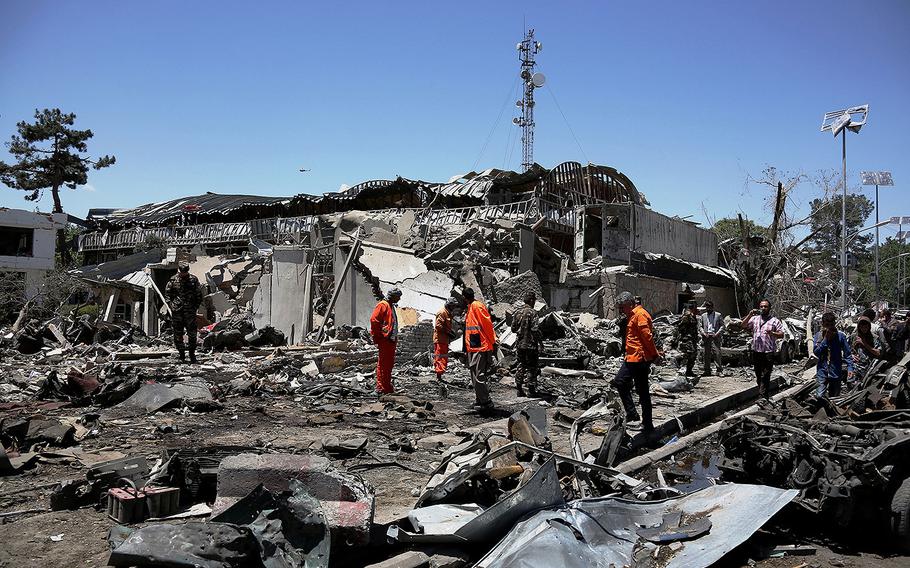 Rescue workers comb through the site of a car bomb explosion on May 31, 2017 in Kabul, Afghanistan. (Rahmat Alizadah/Xinhua/Zuma Press/TNS)

Rescue workers comb through the site of a car bomb explosion on May 31, 2017 in Kabul, Afghanistan. (Rahmat Alizadah/Xinhua/Zuma Press/TNS) 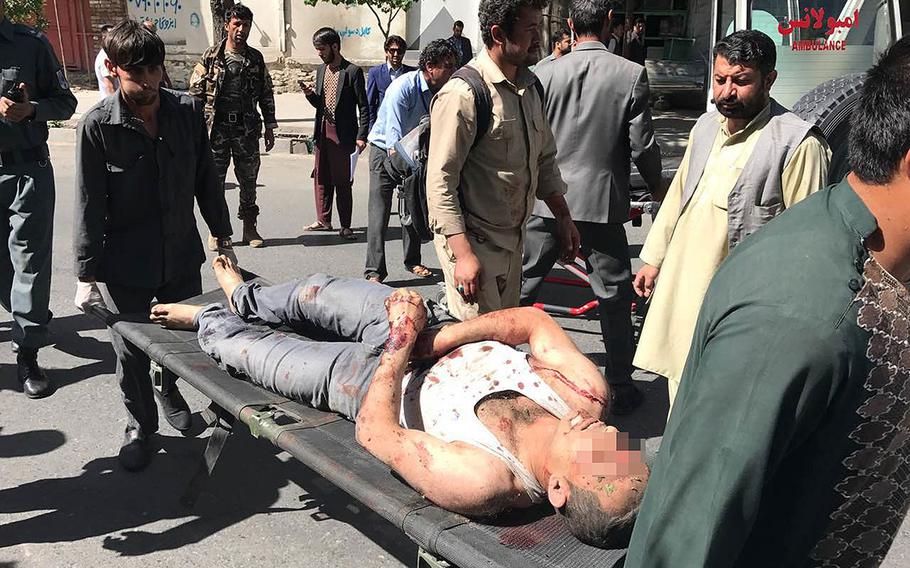 An injured man is transported to hospital on May 31, 2017 in Kabul, Afghanistan. (Rahmat Alizadah/Xinhua/Zuma Press/TNS)

“More than 150 innocent Afghan sons and daughters were killed and more than 300 wounded were brought to hospitals with burns and amputations,” Ghani told attendees of an international peace conference in Kabul.

Previous estimates put the death toll from last Wednesday’s attack at about 90.

The blast occurred when a wastewater tanker laden with explosives detonated at the entrance of Kabul’s heavily fortified diplomatic quarter where both the U.S. Embassy and NATO’s Resolute Support headquarters are located.

All of those killed were Afghans, including nine U.S. Embassy guards. At least 11 American contractors at the embassy were among scores of foreigners injured by the blast, the State Department said.

Violence continued on Friday when several demonstrators, who took to the streets to protest the government’s inability to prevent the bombing, were killed in clashes with police. At a funeral the following day for one of the slain demonstrators, three suicide bombers blew themselves up, killing about 20 others.

The string of violence has left Kabul on edge, and highlighted the worsening security situation in Afghanistan after more than 15 years of U.S. and international support. It also comes as President Donald Trump’s administration decides whether to send additional American troops to country.

Shortly after Ghani announced the revised death toll from last Wednesday’s blast on Tuesday, a rocket struck India’s diplomatic compound, not far from the initial blast site. Officials said no one was injured.

The rocket landed just after the so-called Kabul Process peace conference began, which was attended by representative of dozens of countries. Speaking at the conference, Ghani reiterated his call for the Taliban to join peace negotiations.

“If Taliban wants to join peace talks, the Afghan government will allow them to open an office, but this is their last chance,” he said, adding that the insurgents would “face consequences” if they did not.

But in light of their recent battlefield gains — the Taliban are said to control more territory now than at any other time since 2001 — many believe Ghani’s call will fall on deaf ears, and that the recent uptick in violence could continue.

No group has yet claimed responsibility for last week’s bombing, although Afghan authorities have blamed the Taliban-affiliated Haqqani network, in cooperation with Pakistan’s intelligence service.

Pakistan has denied any involvement.