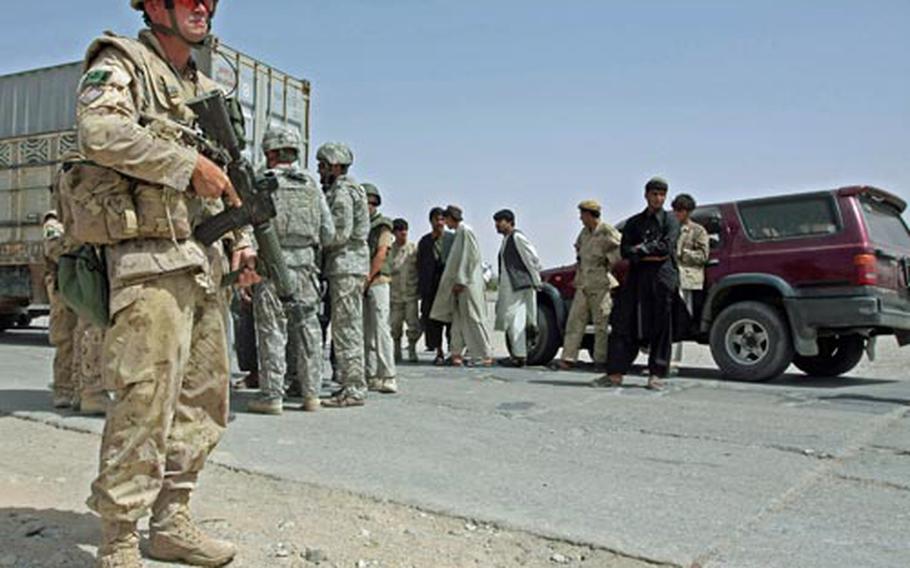 Canadian Sgt. Ole Fredericksen keeps an eye out on a long line of traffic stopped on the highway in Maiwand district, as Canadian and U.S. army officers try to sort out what happened when a group of Afghan private security guards opened fire on a group Canadian soldiers Saturday in Afghanistan’s Kandahar province, thinking they were under attack from the Taliban. A Canadian soldier was fatally shot. (Drew Brown / S&S)

Canadian Sgt. Ole Fredericksen keeps an eye out on a long line of traffic stopped on the highway in Maiwand district, as Canadian and U.S. army officers try to sort out what happened when a group of Afghan private security guards opened fire on a group Canadian soldiers Saturday in Afghanistan’s Kandahar province, thinking they were under attack from the Taliban. A Canadian soldier was fatally shot. (Drew Brown / S&S) 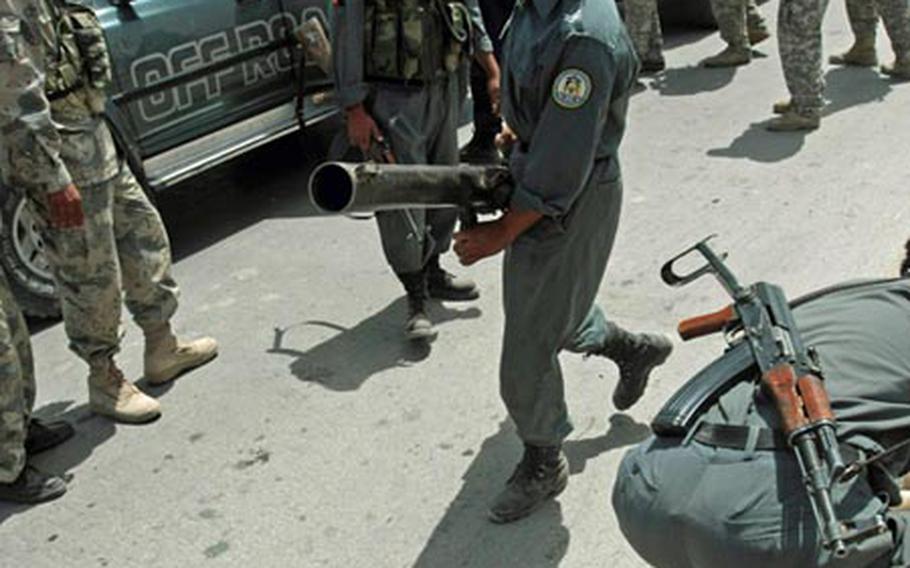 Three Soviet-made 82mm recoilless rifles and several dozen rounds of ammunition were confiscated Saturday from Afghan private security guards in Maiwand district, in Afghanistan’s Kandahar province. A Canadian soldier was mortally wounded when a convoy of private security guards opened fire indiscriminately, thinking they were under attack from the Taliban. (Drew Brown / S&S) 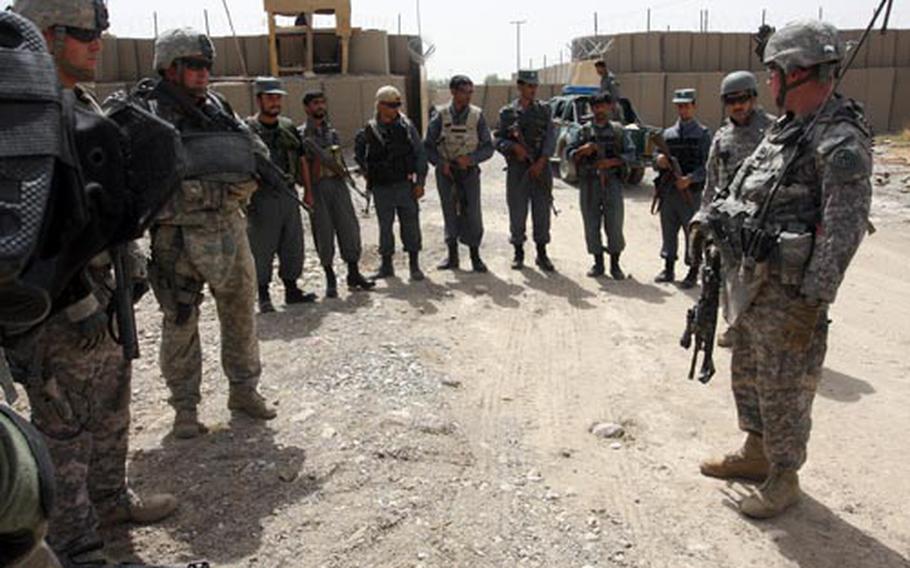 U.S. troops from Task Force Crazy Horse, comprised mainly of soldiers from the 27th Brigade, New York Army National Guard, prepare for a patrol with Afghan police in Maiwand, Afghanistan. The Pentagon endorses a plan to dramatically increase the number of Afghan security forces, but U.S. trainers such as these are already in short supply. (Drew Brown / S&S) 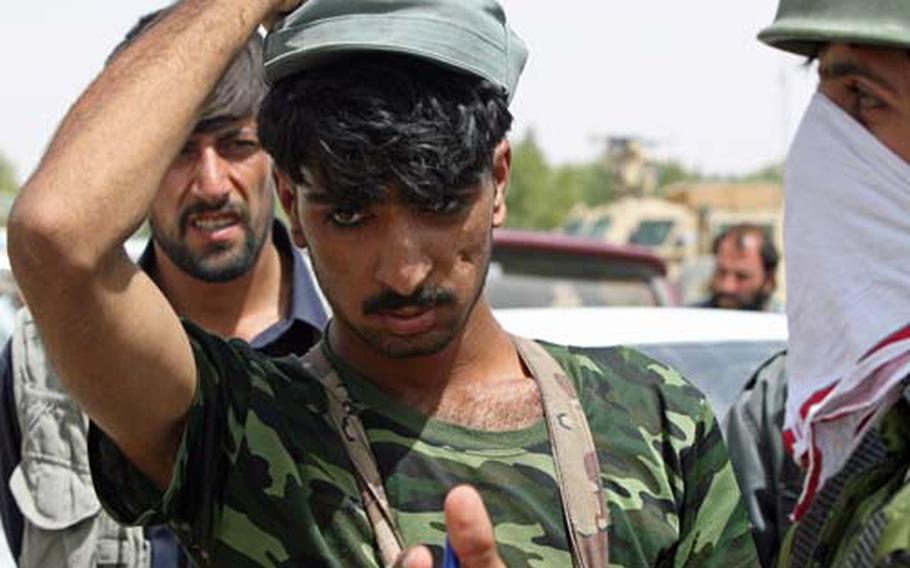 MAIWAND, Afghanistan &#8212;The shooting death of a Canadian soldier this weekend provides a grim example of how chaotic the security situation can often be in southern Afghanistan.

The soldier was mortally wounded Saturday morning in Kandahar province when Afghan private security guards opened fire indiscriminately after Taliban insurgents attacked a nearby group of Canadian troops, according to coalition military officers.

According to a statement issued late Saturday by the Canadian Defense Ministry, the soldier was transported by helicopter to Kandahar Airfield but died on the way.

The Canadian Defense Ministry identified the soldier as Master Cpl. Joshua Brian Roberts. He was assigned to the 2nd Battalion, Princess Patricia&#8217;s Canadian Light Infantry, based in Shilo, Manitoba.

The apparent friendly-fire incident underscores the confusing nature of the fragile security situation in southern Afghanistan, where Taliban guerrillas have become resurgent in the past two years.

An array of coalition forces are training Afghan army and police as a frontline defense against the Taliban, but they are spread thin. The situation is further complicated by a mishmash of poorly-disciplined, but heavily-armed private security guards that have official Afghan and coalition sanction, but which often operate with little oversight or control.

As with the situation in Iraq in recent years, the proliferation of private security guards illustrates just how few coalition troops and Afghan security forces are available to meet all of the myriad security demands in the country.

Private guards are often used to protect road construction crews and food and fuel convoys, but they are also targeted frequently by the Taliban, and in a country awash in guns and violence, the results of having private gunmen operating in the same areas as coalition and Afghan security forces can sometimes be tragic.

Details on how the shooting occurred are still unclear. But according to coalition military officers, a convoy that included groups from two different security companies &#8212; Compass and USPI &#8212; was traveling the main highway west of Kandahar when they passed a group of Canadian soldiers engaged in a firefight with Taliban fighters in the Spin Beer district.

Apparently thinking they were under fire as well, the convoy of private security guards also opened fire.

"Their normal contact drill is that as soon as they get hit with something, then it&#8217;s 360, open up on anything that moves," Frederickson said. "We think that&#8217;s probably what happened."

After the shooting occurred, the private security convoy continued west on Route 1 from Spin Beer district until they were stopped by Afghan security forces and their Canadian and U.S. military advisers in Maiwand district, about 20 miles away.

When questioned by Canadian and U.S. military officers, several of the Afghan security guards freely admitted to opening fire on what they thought were Taliban fighters. But when informed that a Canadian soldier had been wounded, their stories began to change, and many never claimed to have fired at all. Some of the security guards blamed the Afghan army for the incident.

After threatening to arrest the whole lot for lying, in the end there was little that the Canadian and American officers could do, except take the names and mobile phone numbers of the Afghans in charge of the convoy and the names of the suspected shooters. Frederickson said that an investigation by Canadian military police would probably occur.

Twelve members of the Compass security convoy were also found to be wearing Afghan police uniforms, which Afghan police confiscated, along with three Soviet-made 82 mm recoilless rifles, said Maj. Kevin Reilly, team chief for a group of U.S. advisers that trains and mentors the Afghan police in Maiwand district.

Reilly said coalition forces frequently encounter the private security convoys on the roads of Afghanistan and that usually the encounters pass without incident.

"They wave and you wave, and you kind of pass each other in the wind," he said.

Stars and Stripes reporter Michael Gisick contributed to this report.