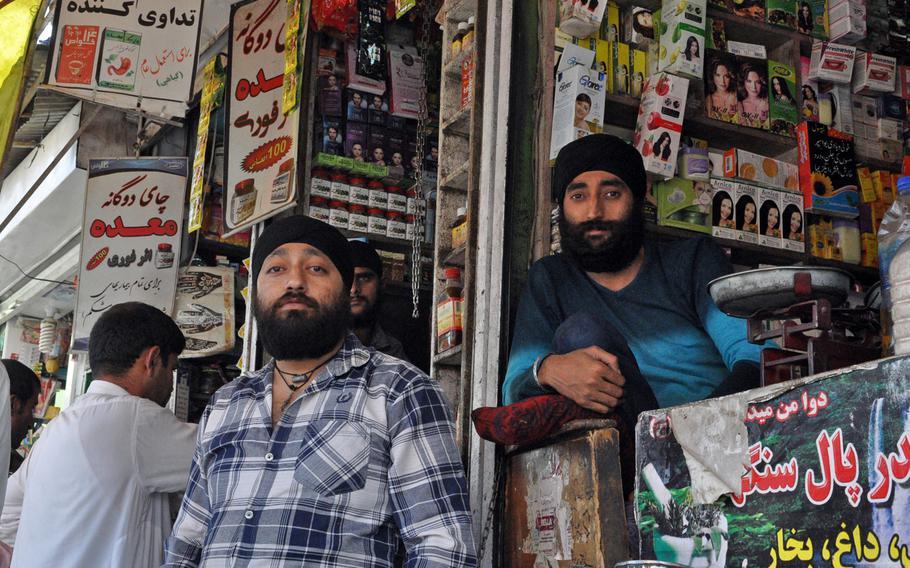 Bilandar Singh, 30, left, and Enderpal Singh, 28, stand next to their small store in downtown Kabul on Aug. 18, 2014. Bilandar Singh said the death of an Afghan Sikh in a smuggling attempt in England shows the urgency felt by the religious minority to leave Afghanistan and migrate to the West. He said he and his family were saving money to leave the country, too. (Steven Beardsley/Stars and Stripes)

KABUL, Afghanistan — The father of two young children and a struggling business owner deep in debt, Jasbeer Singh opted to leave Afghanistan and seek better fortunes for his family in the West, a path taken by many fellow Afghan Sikhs in recent years.

The journey ultimately cost Singh his life. His body was discovered Saturday inside a metal shipping container at the English port of Tilbury with 34 other Afghan Sikhs who were to be smuggled into the country. Port agents discovered the group after hearing shouts from within the container. Singh’s was the only death.

The episode is a window into the desperation of an Afghan minority to leave the country during the current political uncertainty. With few economic opportunities and continuing religious discrimination, Sikhs fear any future turmoil will only be to their disadvantage.

It also shows that the sacrifice of international troops in America’s longest war has not been enough to build confidence among Afghanistan’s vulnerable minorities about the future of their country once most of the foreign soldiers leave by the end of this year.

“We’re leaving because of the problems in the country,” said Bilandar Singh, 30, who owns a spice shop in downtown Kabul. “Normal Afghans suffer here, and we’re the minority.”

Sikhs and Hindus, another Afghan minority with Indian origins, numbered in the tens of thousands across Afghanistan in the decades before the Russian invasion in 1979. Now believed to number closer to 3,000, the community has been leaving en mass in recent years. Its representatives have asked the United Nations and the United States for help in settling the remaining members, with little luck.

Community members say their past acceptance in Afghanistan has disappeared during decades of war and deprivation. They speak of increased harassment and persecution. Kabul residents protested the cremation of their dead on the city’s outskirts, leading to confrontations. Legislators in the Afghan parliament refused to reserve a seat for the community, forcing President Hamid Karzai to decree the creation of one.

Sikh and Hindu business owners, meanwhile, suffer from the same economic malaise affecting the rest of Afghan society. Uncertainty over the status of Western troops in the country and a presidential election stalemate mean less spending and lower investment.

“Business has gone down in the past two years,” said Iqbal Singh, a Sikh religious leader in Kabul. “And now when we have the election dragging on from five to six months, it added to uncertainty about the country. Some people are worried about their future, which is why they flee the country.”

Jasbeer Singh, called “Meet” by those who knew him, owned a spice shop in the eastern city of Jalalabad, according to his uncle, Daleeb Singh, 55, who was reached by phone Monday. Meet Singh owed money for the business, his uncle said, and his creditors had begun asking more frequently to be repaid.

With his wife and two young sons, Meet Singh left abruptly one day a year and a half ago, Daleeb Singh said.

“He didn’t tell me where he was going,” he said. “He just told me he was going abroad. And the next day he disappeared. He couldn’t leave the area in the open.”

The last word the uncle received from his nephew was a phone call from Belgium, where Meet Singh and his family lived for several months before their attempt to smuggle themselves into England.

Daleeb Singh said family members held a small mourning ceremony for their relative. He hopes the British government will return the body to Jalalabad. He wants them to grant asylum to his nephew’s family.

“They don’t have any property here, any reason to be here,” he said. “They will suffer a lot if they come back.”

At his herb and spice shop in Kabul, Bilandar Singh said he and his relatives were saving money to leave the country. He said Singh’s death wouldn’t stop Sikhs from working with smugglers, or even agreeing to be smuggled inside a metal container.

“From the beginning they know they have to deal with the smugglers,” he said. “It’s a game of life and death.”