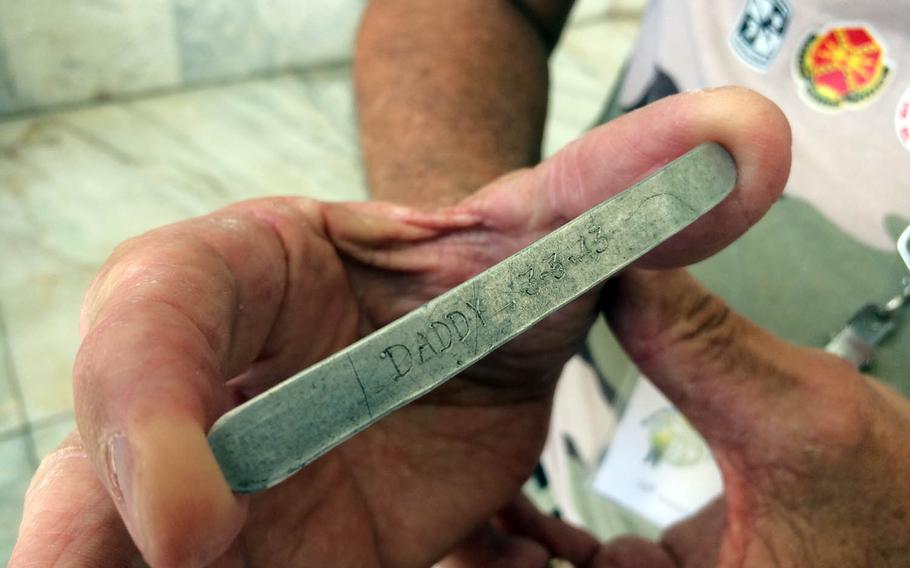 Buy Photo
The metal bracelet that U.S. soldier Charles D. Brown made in a Japanese POW camp for his infant son's first birthday in 1943. (Seth Robson/Stars and Stripes)

Buy Photo
The metal bracelet that U.S. soldier Charles D. Brown made in a Japanese POW camp for his infant son's first birthday in 1943. (Seth Robson/Stars and Stripes) Buy Photo
Art depicting U.S. and Filipino soldiers is seen near the summit of Mount Samat in Bataan, Philippines. (Seth Robson/Stars and Stripes) 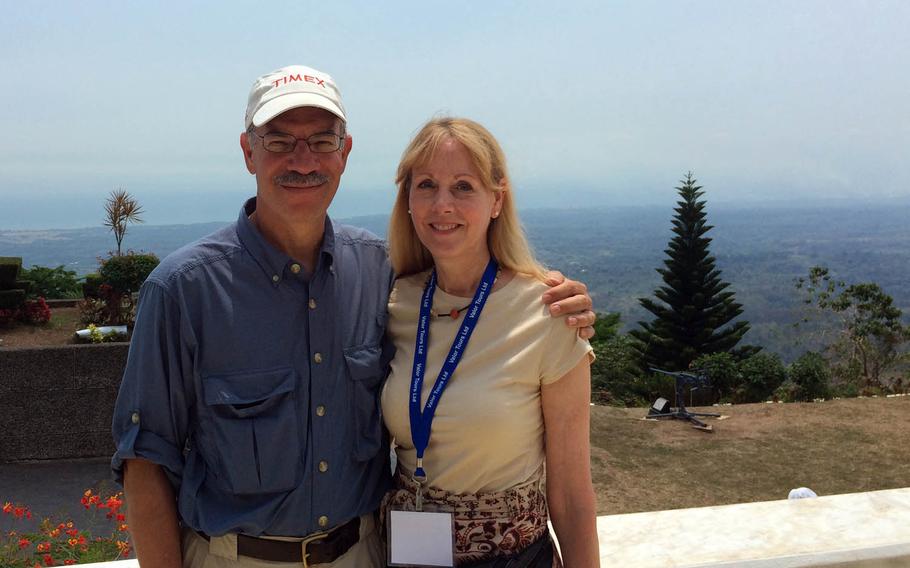 Buy Photo
Joe Brown, 75, of Temecula, Calif., holds a bracelet made for him by his father, Warrant Officer Charles D. Brown, during his incarceration in a Japanese POW camp in the Philippines during World War II, in Bataan, Philippines, April 10, 2017. (Seth Robson/Stars and Stripes)

His father, Warrant Officer Charles D. Brown, made the band in a POW camp after the surrender of U.S. and Filipino forces to the Japanese Imperial Army at Bataan on April 9, 1942.

“He survived the Death March but died on a hell ship [the Arisan Maru] on 24 Oct., 1944. It was sunk 200 miles off the coast of China,” said Brown, one of several Americans who last week helped Filipinos commemorate the anniversary of the Fall of Bataan.

Only one U.S. Bataan veteran, Oscar Leonard, 98, made it back to the Philippines for the event, but there were plenty of veterans’ relatives like Brown.

The 75-year-old from Temecula, Calif., was born in the Philippines. After his Army clerk father was captured, Brown’s mother, a Spanish national, stayed at their house in Manila, he said.

“The Filipinos didn’t rat us out and tell the Japanese about the woman with four children whose husband is in the Army,” Brown said.

His father gave it to a German priest who was working with his wife to smuggle money, tobacco and medicine to the POWs, Brown said.

“He made that as a present for my first birthday,” he said.

The priest, who brought the bracelet to Brown’s mother, was eventually caught smuggling and beaten to death by the Japanese but never revealed who had helped him, he said.

Another veteran’s relative who came to Bataan this month is Blythe Shively, 67, of Lafayette, Ind., daughter of the late Sgt. Harold Malcolm Amos, an Army medic who served at General Hospital No. 2 on Bataan. She visited the site of the hospital, near the Kilometer 7 marker on the Death March trail.

The markers and a few commemorative plaques and monuments are the only reminders of the epic battles that once raged nearby or the suffering of prisoners on the Death March.

“This is the sixth time I have been here,” she said. “I love coming back because Dad loved it so much. He came back 14 or 15 times. It was a healing process for him.”

“He remembers folks throwing rice to the POWs and that incensed the Japanese,” he said. “A woman was nursing a baby and a Japanese guard threw the child into the air and caught it on his bayonet. He saw that.”

Amos marched 80 miles to Camp O’Donnell but was moved to another POW camp at Cabanatuan, John Shively said.