Deal likely to bring more US military assets to Australia 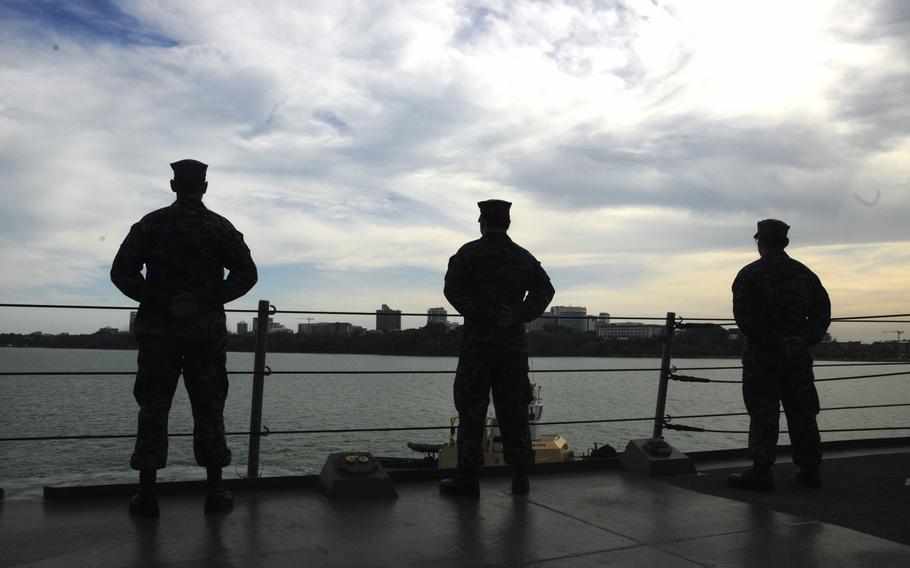 U.S. Navy sailors man the rails aboard the U.S. 7th Fleet Flagship USS Blue Ridge as it pulls into port in Darwin, Australia, in June 2013 on a mission to build maritime partnerships and conduct security operations. Port calls by U.S. by U.S. ships are expected to increase under an agreement made by the leaders of the two countries last week. (Brannon Deugan/U.S. Navy)

FORT SHAFTER, Hawaii — The U.S. military is expected to significantly increase the number of troops, ships and watercraft rotating through Australia as a result of the beefed-up Force Posture Agreement announced last week.

Although details about numbers and initiatives remain largely unspecified, defense analysts from both countries expect an increased presence in Australia for the U.S. Air Force, Navy and Marines in the form of bombers, nuclear submarines, missiles and troops.

The agreement assures that the roughly 1,100 U.S. Marines now moving through a base in Darwin on six-month rotations will increase to 2,500 within a couple years — and possibly expand into “something larger,” said Dr. Andrew Davies, director of research at the Australian Strategic Policy Institute in Canberra.

“I think this is an important step forward for the alliance,” said Zack Cooper, a defense analyst with the Center for Strategic and International Studies in Washington.

The United States has a limited number of bases, which are highly vulnerable, in the Asia-Pacific region, he said.

“The challenges for the United States in Asia are quite substantial,” he added. “Anything the U.S. can do to decrease the vulnerability of its forces in the region is a big positive.”

America’s main bases in the region are in Japan and South Korea in the northern Pacific and in Guam, about 1,500 miles east of the Philippines – which itself had been home to massive U.S. Air Force and Navy bases until the early 1990s.

While the U.S. won’t be establishing permanent bases in Australia, gaining further access to runways and ports would provide both haven and support for missions in the South Pacific.

It’s also a way to step up training and joint exercises between the U.S. and the Australian Defense Force, Davies said. He said it’s likely the Air Force will begin using runways in the northern part of the country, possibly for the B-52 strategic bomber and B-2 stealth bomber.

“The U.S. has been interested in using these bases, if not all the time, then at least being able to rotate forces through them,” Cooper said. “And geographically the bases are nicely located to make it easy for the U.S. to get quickly into Southeast Asia if they need to.”

Two Royal Australian Air Force runways have been discussed as possibilities — RAAF Tindal in the Northern Territory and RAAF Learmonth in the northwest, said James Brown, a defense analyst with the Lowy Institute for International Policy in Sydney. Learmonth is one of Australia’s three “bare bases” in the remote north, so-called because they are not home to any permanent flying or support units.

Dr. Bates Gill, head of the United States Studies Centre at the University of Sydney, said that the agreement also settled a debate between the two countries about who would pay for U.S. Marine rotations through Darwin. Australia will pick up the tab on most of that, Gill said, although the exact figures and other details of the agreement aren’t expected to become known until an August meeting of foreign ministers from member nations of the Association of Southeast Asian Nations.

Davies said that the U.S. Navy would “most likely” have greater access to fleet base facilities in the western port near Perth. U.S. nuclear submarines have occasionally used those facilities, so a precedent exists, he said.

But the U.S. would face considerable challenges to regularly dock nuclear submarines there, Cooper said.

Because Australia doesn’t operate nuclear subs, it doesn’t have the kind of infrastructure the U.S. would ideally like in a base, Cooper said. “It’s costly, and it’s technologically challenging,” he said.

Gill said his speculation was that the agreement would produce trilateral engagements among Australia, America and, sequentially, one other regional country. The engagements would start out low-key and relatively small, possibly with New Zealand.

“The Holy Grail on all this, the hoped-for big ticket under that rubric, would be with China,” Gill said.

The first such trilateral engagement is symbolically important, Gill said, because the overall American strategy is to take some steps beyond the “traditional hub-and-spokes bilateral model and see the cooperation with Australia not just as a bilateral one but one in which both Australia and the United States can engage with third parties in the region.”

There are also “political sensitivities” in both countries to consider, Cooper said.

“Any time you’re putting some forces forward, it means that those forces are no longer based in the districts they used to be based in, so it can be a Congressional challenge,” he said. “But I think there’s also a domestic political problem for the Australians. Although the polls that I see generally tend to show pretty high support for increasing U.S.-Australian cooperation, there is this hesitance. There are different points of view in Australia, which is only natural, and some experts are wary of making the U.S. and Australia even closer than they are and the implications that might have for China.”

Although no specifics were forthcoming about where the two countries are headed on missile defense cooperation, Brown said that cooperation is more likely to speed up under Australia’s new government, which was formed last year under newly elected Prime Minister Tony Abbott.

Just how far Australia’s government is willing to go with military cooperation with America will be revealed in its defense white paper, expected to be released within the next year, Cooper said.