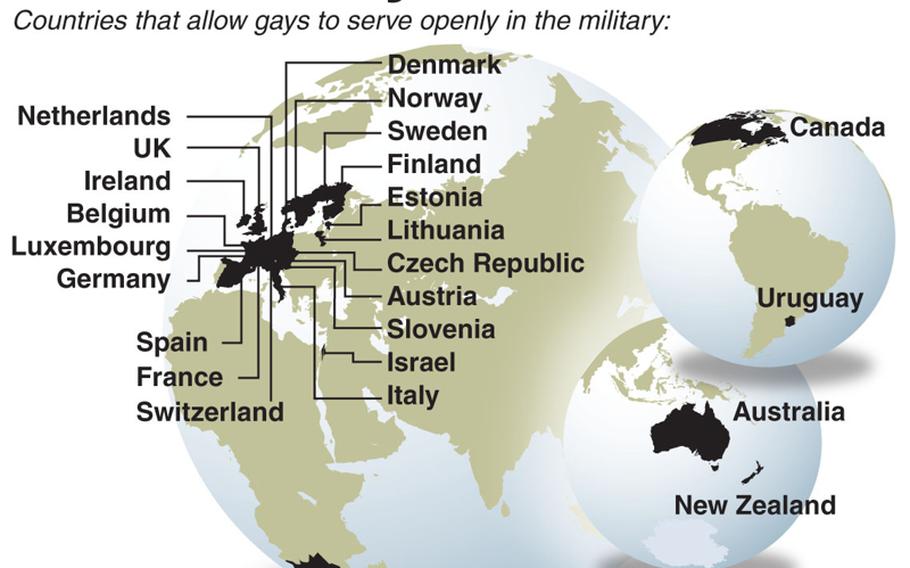 Chart shows the countries that let gays service openly in the military. (MCT 2010) 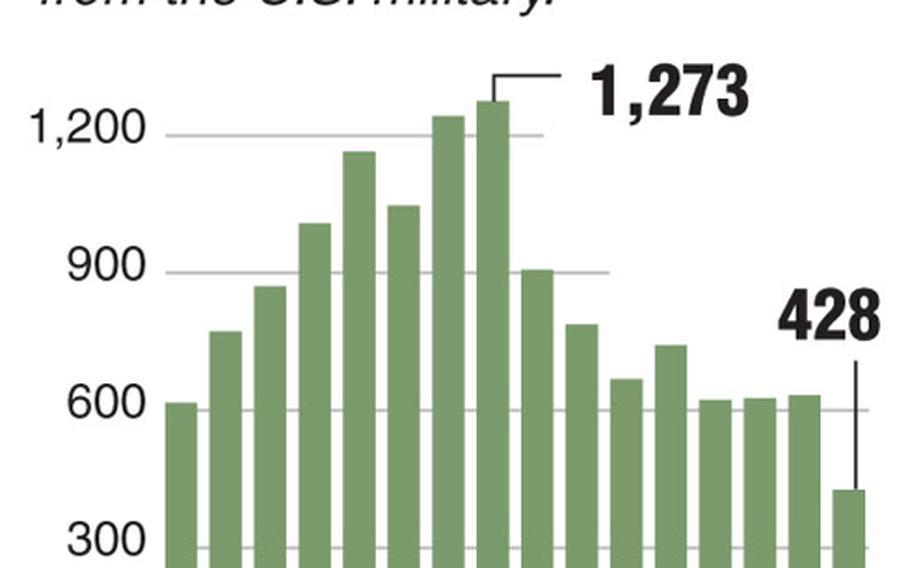 WASHINGTON &mdash; Congress is poised to dump the military&rsquo;s controversial &ldquo;don&rsquo;t ask, don&rsquo;t tell&rdquo; law within days, thanks to last-minute concessions by the White House and Pentagon.

The proposal &mdash; an amendment to the annual defense authorization bill that is scheduled to be approved this week by the full House and the Senate Armed Services Committee &mdash; would include a delayed implementation provision that would leave the 17-year-old law in place until the Pentagon&rsquo;s review of the ban on openly gay troops is completed in December.

The president, defense secretary and the chairman of the Joint Chiefs would also have to certify that the military can make the change without disrupting military operations or morale.

In a letter to Congress, White House Office of Management and Budget director Peter Orszag wrote that while the president would have preferred any legislative action wait until after the study is complete, &ldquo;the administration is of the view that the proposed amendment meets the concerns raised by the Secretary of Defense and the Chairman.&rdquo;

Pentagon spokesman Geoff Morrell said Defense Secretary Robert Gates also would rather have a completed review before any legislative action, but &ldquo;with Congress having indicated that is not possible, the secretary can accept the language in the proposed amendment.&rdquo;

Both the House and Senate still have to vote on the proposed repeal amendment. On Monday, Sens. Carl Levin, D-Mich., and Joe Lieberman, I-Conn., and Rep. Patrick Murphy, D-Pa., sent a letter to the president essentially setting an ultimatum on the repeal, asking him to endorse the amendment they planned on advancing with or without his help.

&ldquo;It is our firm belief that it is time to repeal this discriminatory policy that not only dishonors those who are willing to give their lives in service to their country but also prevents capable men and women with vital skills from serving in the armed forces at a time when our nation is fighting two wars,&rdquo; the letter stated.

The arrangement would leave the ban on gay troops serving openly in place for several more months, and allow military officials to dismiss any troops who publicly admit their homosexuality. Gay rights groups, however, praised the compromise as a critical step forward in their 17-year effort to overturn the law.

&ldquo;We have been making the case to White House staff for more than a year now that delayed implementation is realistic, politically viable, and the only way to get the defense community on board with repeal,&rdquo; Alexander Nicholson, executive director of Servicemembers United, said in a statement late Monday. &ldquo;We are glad to see the community and now the administration and defense leadership finally rally around this option.&rdquo;

Nicholson said the new plan isn&rsquo;t without concern: Pentagon leaders could drag out the repeal review longer as a way to postpone or preserve the ban on gays serving openly. But he said Gates&rsquo; and Mullen&rsquo;s public comments in favor of a repeal calmed those fears.

&ldquo;Right now we feel comfortable putting the chairman and secretary of defense in the driver&rsquo;s seat,&rdquo; he said in the statement.

And Aaron Belkin, director of the Palm Center, which advocates gay rights, praised President Barack Obama&rsquo;s guidance throughout the negotiations. That&rsquo;s a stark change from the last few months, when gay rights groups have publicly sniped at the White House for a lack of action on a promised repeal.

Opponents of a repeal called the new compromise nothing more than a political move that will jeopardize military morale and readiness.

Elaine Donnelly, president of the Center for Military Readiness, called the announcement &ldquo;surrendering the military to the control of political appointees doing the president&rsquo;s bidding.&rdquo; The Family Research Council promised to lobby lawmakers throughout the week in hopes of derailing the plan.

The House is expected to debate its version of the defense authorization bill &mdash; which passed out of the House Armed Services Committee without any reference to the ban on gays &mdash; later this week. Murphy&rsquo;s stand-alone repeal bill already has more than 190 co-sponsors, and the lawmaker has said he has enough other pledges from other representatives to assure its passage.

The Senate Armed Services Committee is expected to complete its version of the budget bill by Thursday, and Levin has pushed for its inclusion there for months.

Nearly 14,000 troops have been discharged from the service under the &ldquo;don&rsquo;t ask, don&rsquo;t tell&rdquo; law since its adoption in 1993.

Stars and Stripes reporter Kevin Baron contributed to this story.