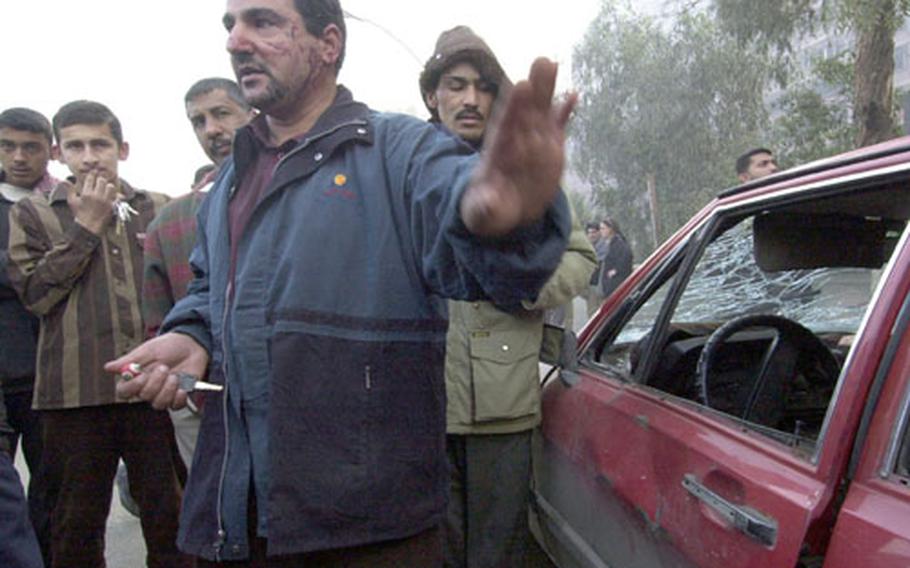 An Iraqi man explains how he was past the blast area heading toward the bridge when the explosion threw his car down the street. (Jim Schulz / S&S)

An Iraqi man explains how he was past the blast area heading toward the bridge when the explosion threw his car down the street. (Jim Schulz / S&S) 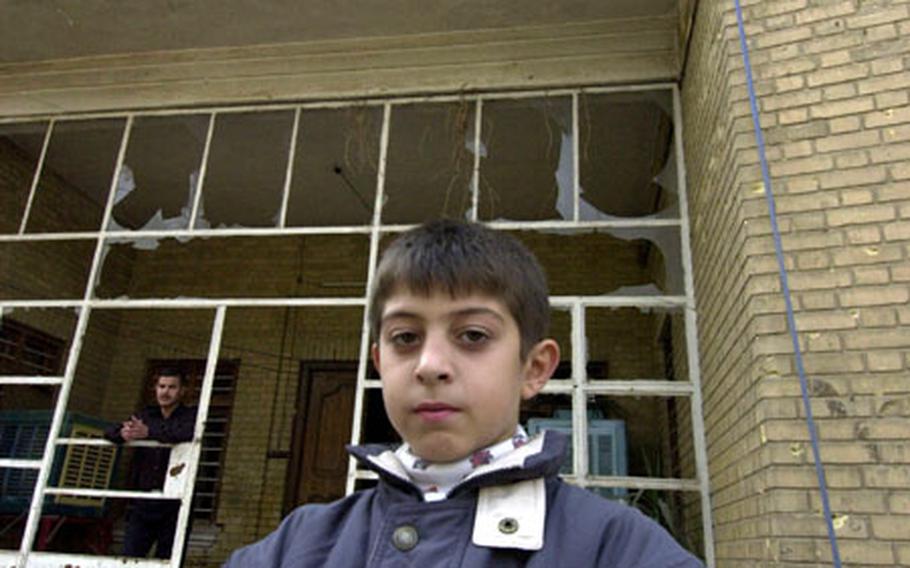 An Iraqi boy stands on the gate outside his house. The concussion for the car bomb blew out the windows of shops and houses for blocks. (Jim Schulz / S&S) 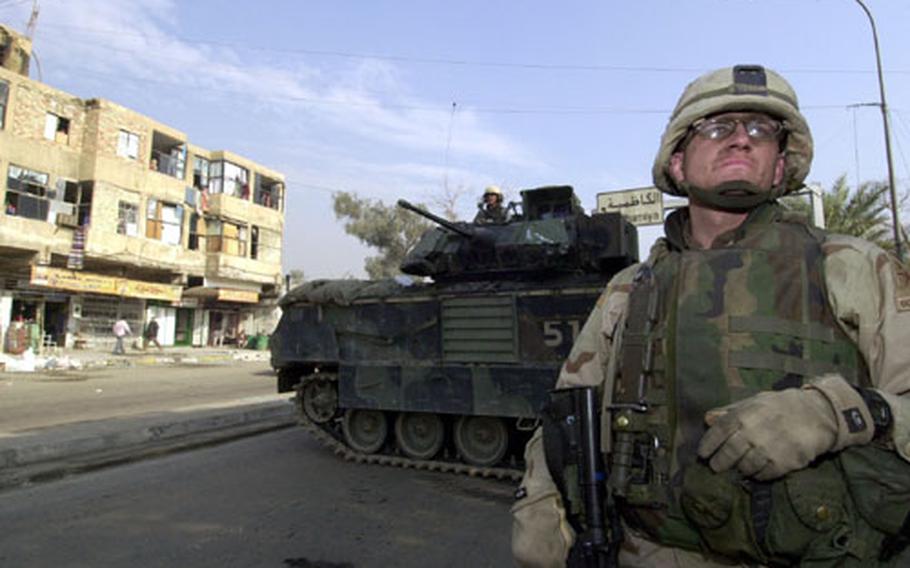 Sgt. John Kelley, of Company A, 2nd Battalion, 6th Infantry Regiment, was one of the first soldiers on the scene after Sunday&#39;s blast in downtown Baghdad. (Jim Schulz / S&S) 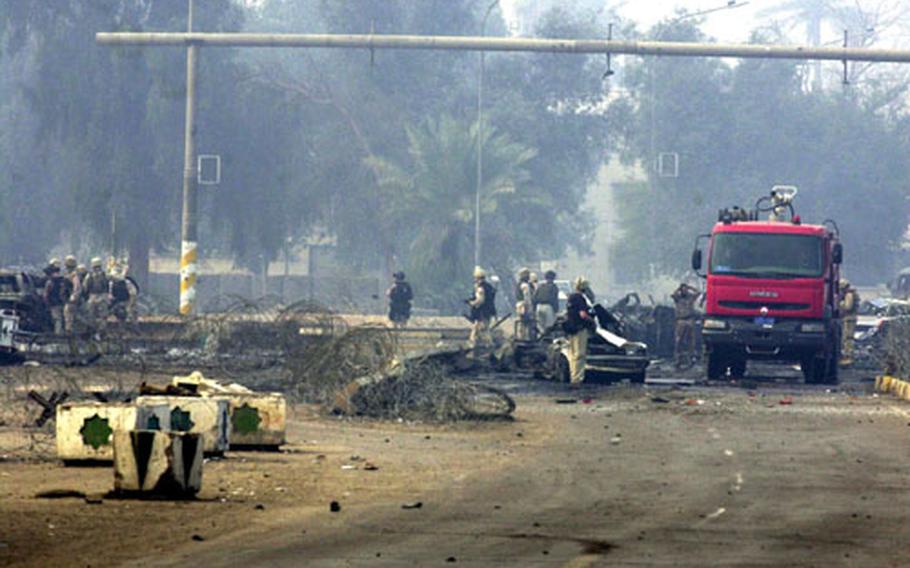 Investigators sift through the remains to determine the strength of the blast Sunday in Baghdad. (Jim Schulz / S&S)

BAGHDAD, Iraq &#8212; A suicide bomber driving a white Toyota pickup truck pulled up to a U.S. checkpoint at the gates of the U.S.-led coalition headquarters Sunday and detonated an estimated 1,000 pounds of explosives, killing at least 23 Iraqis and wounding more than 60 people, according to U.S. military officials.

Although several news agencies reported two American contractors were killed, the U.S. military would not confirm that information.

The blast occurred at 8:03 a.m. on a main thoroughfare just blocks from the Tigris River. A thick fog shrouded the city.

Biller and his squad were part of a quick reaction force that responded within minutes.

Each morning, Iraqi civilians line up outside the entrance to the Green Zone, headquarters for the Coalition Provisional Authority. Soldiers call the entrance Assassin&#8217;s Gate or MOAC &#8212; the Mother of All Checkpoints &#8212; because of the dangers they face.

The truck was in line to be checked for bombs when the explosives detonated.

Investigators believe the driver was attempting to take the device inside the Green Zone, according to Col. Ralph Baker, commander of the 2nd Brigade, 1st Armored Division. Baker&#8217;s troops, deployed from Baumholder, Germany, are responsible for security in the area.

At first, troops thought a second car bomb was planted 400 meters from the gate, but soldiers trained in explosives later ruled that out, Baker said.

&#8220;There were flames everywhere. I helped get three injured guys off a bus,&#8221; said Kelley, who had returned to Baghdad on Saturday after two weeks in Baumholder. &#8220;I just imagine what my wife is thinking.&#8221;

Troops had cleared the area but fires were still burning and Iraqis were wandering about when Christopher Cox of the Tennessee National Guard&#8217;s 269th Military Police Company arrived.

Cox, the MP company medic, saw one Iraqi man with severe injuries and jumped into action.

About 20 Iraqis were treated at a U.S. military hospital. Iraqi security forces and paramedics also responded to the scene and took 30 wounded Iraqis to local hospitals, military officials said.

The bomb shattered windows on homes and storefronts for several blocks. A trail of blood ran through muddy puddles in the back streets nearby. Twisted hulks of burnt cars lay smoldering.

One man, driving a small, red sedan narrowly escaped the concussion. His car windows were smashed. Splatters of blood dripped down his checks as he showed onlookers a large hunk of shrapnel that hit his car. It appeared to be part of an artillery shell.

Soldiers cordoned off the area to keep out local Iraqis and journalists. Within one hour, the infantry and military police moved crowds back and set up a perimeter with white engineer tape.

Hysterical Iraqis begged soldiers to let them pass so they could check on loved ones they thought might be killed or injured. Soldiers were under orders to turn them back.

Tensions ran high for several hours. Soldiers jumped at every approaching car, aiming their machine guns and sending search teams through the crowd.

Meanwhile, Iraqis began sifting through the debris and sweeping up shards of glass from the shop windows.

While investigators must complete their analysis of the explosives, Baker said PE-4 plastic explosive is typically used.

The gate is popular for demonstrators and the press, Baker said, adding that a bomb explosion there would gain international attention. He also said the fact that the insurgents could not breach the Green Zone spoke highly of the military&#8217;s security.

Attacks against troops had decreased over the past six months, Baker said.

&#8220;You&#8217;re going to continue to see anomalies like car bombs that occur by what I believe are terrorist forces hoping to discredit the reforms and progress taking place,&#8221; Baker said.

Staff Sgt. Robert Jones, 37, of Fayetteville, N.C, challenged terrorists to take the fight out of the city.