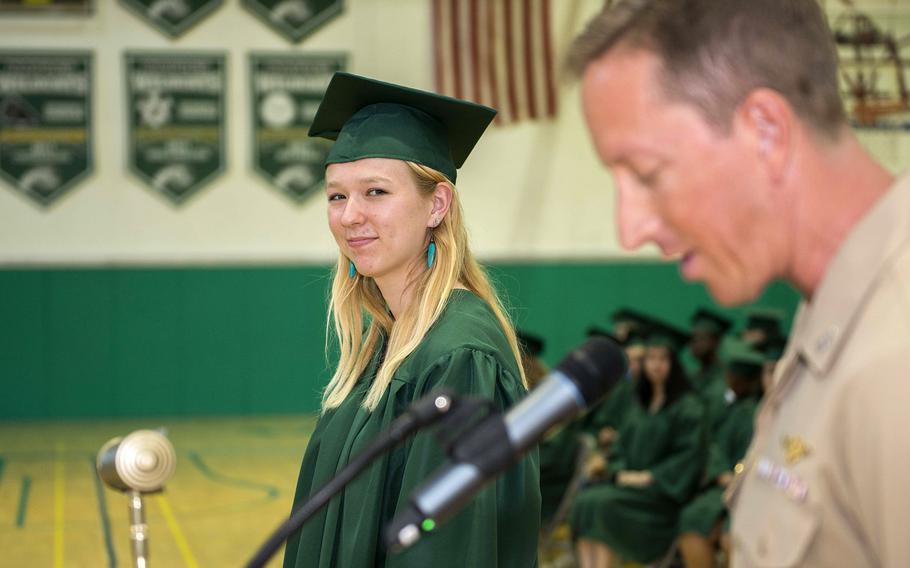 Sophia Adams, a senior at Naples Middle High School, is recognized as a U.S. presidential scholar on June 4, 2019 during a ceremony at the Navy Support Site in Naples, Italy. Sailors with at least 10 years of service and are unable to reenlist have until July 11 to transfer their Post-9/11 GI Bill education benefits to family members. (Donavan K. Patubo/U.S. Navy)

Starting later next month, some mid-career and senior servicemembers will be unable to transfer their Post-9/11 GI Bill education benefits to family members.

New rules the Pentagon put in place last summer take effect July 12, limiting the option to transfer the benefit only to troops who have served at least six years, but not more than 16, and who commit to serve an additional four years.

The date next month also marks the end of a policy exception the Pentagon announced in January to allow troops with at least 10 years of service, but who were ineligible to reenlist for an additional four, to transfer their benefits.

That exception applied to servicemembers affected by mandatory retirement, a career-ending medical problem or failure to gain timely promotion.

Under previous rules, such troops could still transfer the benefit if they committed to serve for the maximum amount allowed by service policy or statute, even if it was less than four years. The new rules were meant to do away with that provision immediately last July, until the retroactive extension was announced earlier this year.

Servicemembers wounded in combat who have received Purple Heart medals are exempted from the rule changes.

In most cases, the Post-9/11 GI Bill benefits cover the cost of in-state public university tuition, plus a monthly housing stipend that can pay for a four-year degree or other educational programs for eligible troops, veterans and family members. Many private schools also offer grants to pay the difference between the cost of public and private school tuition.

There had not previously been a restriction on when servicemembers could transfer education benefits to their family members, once they had served six years.

When veterans’ advocates criticized the new cap at 16 years, military officials said the transfers were intended as a retention tool and not a benefit to careerists.

Earlier this month, during debate of the annual defense authorization bill, the House Armed Services Committee unanimously approved a provision that would allow continued eligibility for senior servicemembers to transfer the benefits to their family members.

The measure must still gain the backing of the full House and Senate before it becomes law.