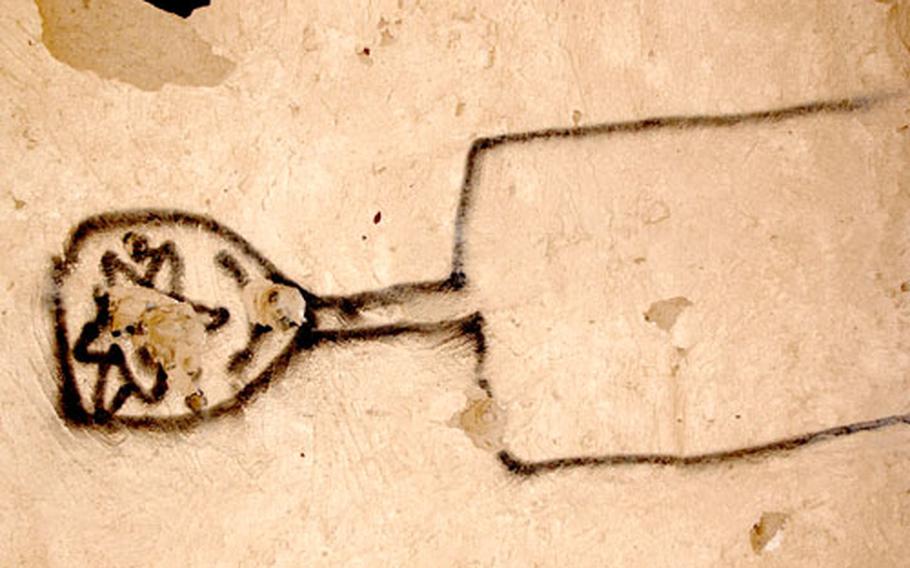 Soldiers from the 101st Airborne Division came upon this drawing about 20 miles northeast of Camp Anaconda. On one wall of a hut were crudely drawn pictures of human forms with bullet holes in them along with rusted, spent AK-47 cartridges on the ground. (Jeff Schogol / S&S)

CAMP ANACONDA, Iraq &#8212; The body&#8217;s stomach is bloated. It is greenish yellow from sulfur used to cover the stench. And it shows signs of torture &#8212; an apparent victim of insurgents, Staff Sgt. Jacob S. Finger said.

Finger, 27, and his troops with the 3rd Battalion, 29th Field Artillery Regiment of the 4th Infantry Division, came upon the body when they found what looked like an insurgent training area while on patrol.

He ordered the body hoisted out of the bottom of a well when his troops came upon it to make sure it wasn&#8217;t that of a soldier. There were no indications the body was that of an American soldier.

Once the body was winched out of the green slime, troops removed the hood from its head and found a screw in its skull, showing the victim was tortured before being shot in the head and dumped, said Finger, of Denver.

Troops say these are common insurgent tactics. The body was left on the ground for the Iraqi army to pick up later.

The troops, who are under the 101st Airborne Division, came upon the site 20 miles northeast of Camp Anaconda. More evidence of insurgent activity surfaced nearby at a mud hut found by the troops.

On one wall of the hut were crudely drawn &#8212; almost childlike &#8212; pictures of human forms with bullet holes in them along with rusted, spent AK-47 cartridges on the ground, indicating insurgents used the area as a firing range, Finger said.

He said troops also found a human leg bone and posts where the victim found in the well was probably bound and tortured. Bloodstains were nearby.

Neighboring Iraqis told U.S. troops there is no insurgent activity in the region, but Finger said he wondered how they could not hear the victim&#8217;s screams or the insurgents practicing their aim.

When a local Iraqi drove by, Finger ordered his men to bring him over to the site of the body.

The Iraqi said he knew nothing about the body.

The body was the second set of remains U.S. troops found during the patrol on Thursday.

Earlier in the day, troops found some bones by the roadside, but the discovery was later overtaken by other events.

Sgt. Diego Barros, 24, of Loveland, Colo., said it is not unusual to come across dead bodies because of the frequency of kidnappings in Iraq.

Troops with the 3-29th seem unfazed by the gruesome discoveries of that day.

Finger said he has become desensitized to such scenes.