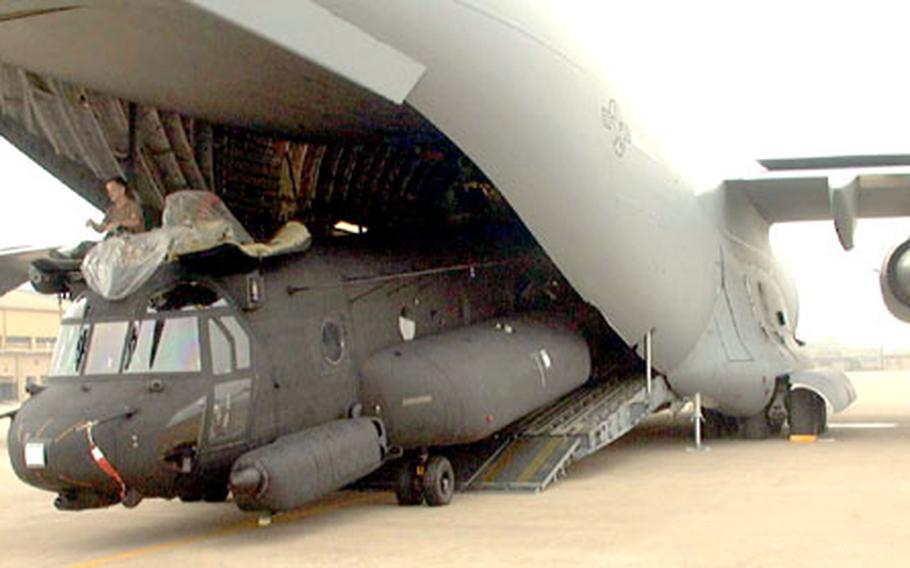 PYEONGTAEK, South Korea &#8212; The elite U.S. Army special operations helicopter unit that was created especially for service in South Korea is no longer stationed on the peninsula, Stars and Stripes has learned.

Instead, Company E, 160th Special Operations Aviation Regiment (Airborne) has been de-activated and absorbed into a newly formed special operations helicopter battalion at Fort Lewis, Wash., that will be formally activated on Wednesday.

Since 2001, Company E &#8212; which specialized in flying commando-style infiltration missions &#8212; had been stationed in Daegu inside a U.S. compound at K-2 Air Base, also known as Daegu Air Base. K-2 is a South Korean air force installation that shares space with commercial Daegu Airport.

Company E was assigned six MH-47E Chinook heavy assault helicopters, which are Chinook variants modified for special operations. The company&#8217;s chief mission was ferrying special operations troops hundreds of miles and sneaking them into and out of combat, especially at night.

Its helicopters could deliver 30 fully equipped troops on five-hour, deep-penetration, covert missions over a 345-mile radius, at night and in bad weather.

Under a shroud of secrecy, the Army formed the company in 2001 at Fort Campbell, Ky., where the 160th SOAR is headquartered, for the purpose of basing it in South Korea, U.S. military officials later said.

The Defense Department was spending an estimated $13 million in renovations and new construction to base Company E in South Korea, officials said in 2001.

At the same time, the U.S. Air Force established the 607th Support Squadron at K-2 and gave it two main missions: providing day-to-day airfield support services to Company E, and being ready to rapidly convert K-2 Air Base to a wartime footing in case of war or other major crisis, Air Force officials said at the time.

The 607th Support Squadron continues to operate at K-2.

Company E had not been in its new South Korea home long when it was deployed for six months to the Philippines to take part in the war on terrorism.

In February 2002, one of Company E&#8217;s helicopters crashed at sea in the southern Philippines, killing all 10 servicemembers aboard, including the unit&#8217;s first commanding officer, Maj. Curtis D. Feistner.