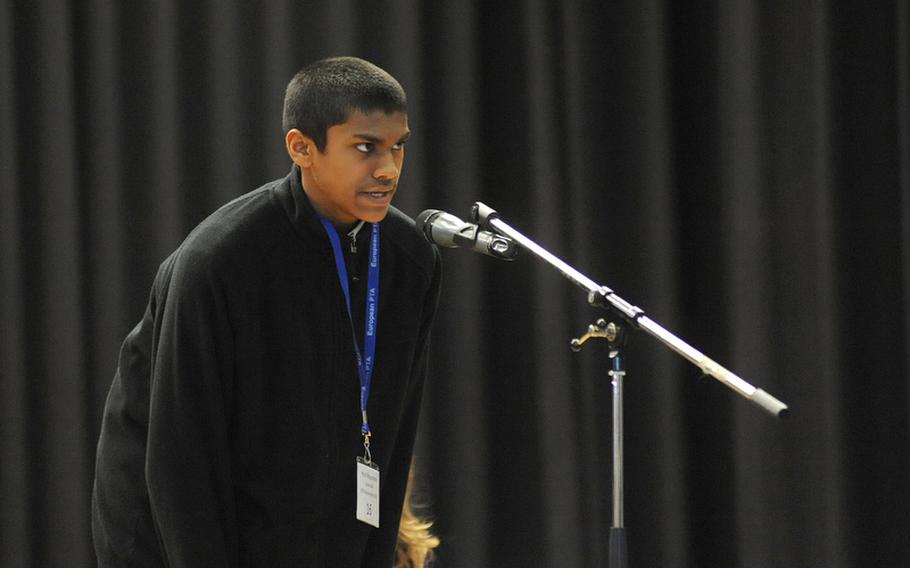 Buy Photo
Anuk Dayaprema of Vicenza spells limpet correctly to win the European PTA Spelling Bee for the second year in a row ahead of Kayla Lucas of Naples who was also last year&#39;s runner-up. (Michael Abrams/Stars and Stripes)

Buy Photo
Anuk Dayaprema of Vicenza spells limpet correctly to win the European PTA Spelling Bee for the second year in a row ahead of Kayla Lucas of Naples who was also last year&#39;s runner-up. (Michael Abrams/Stars and Stripes) 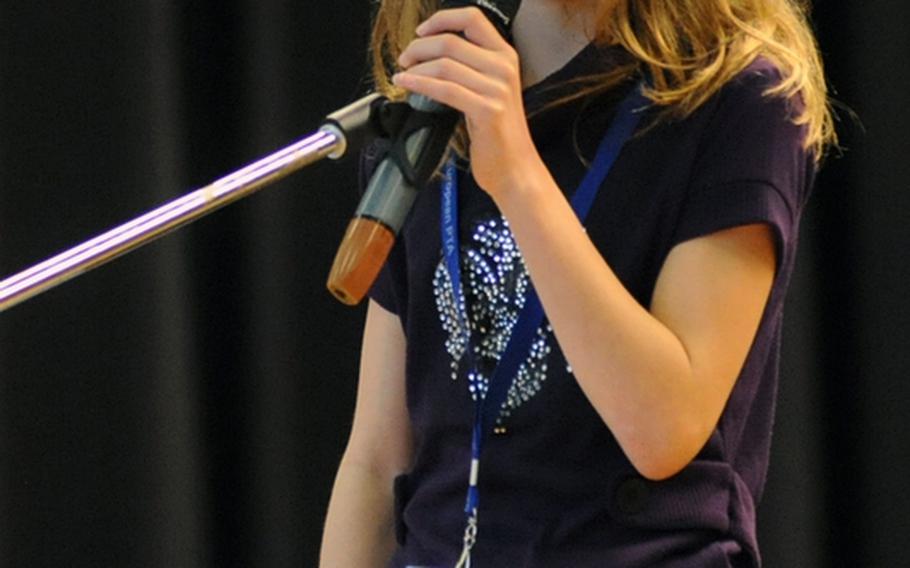 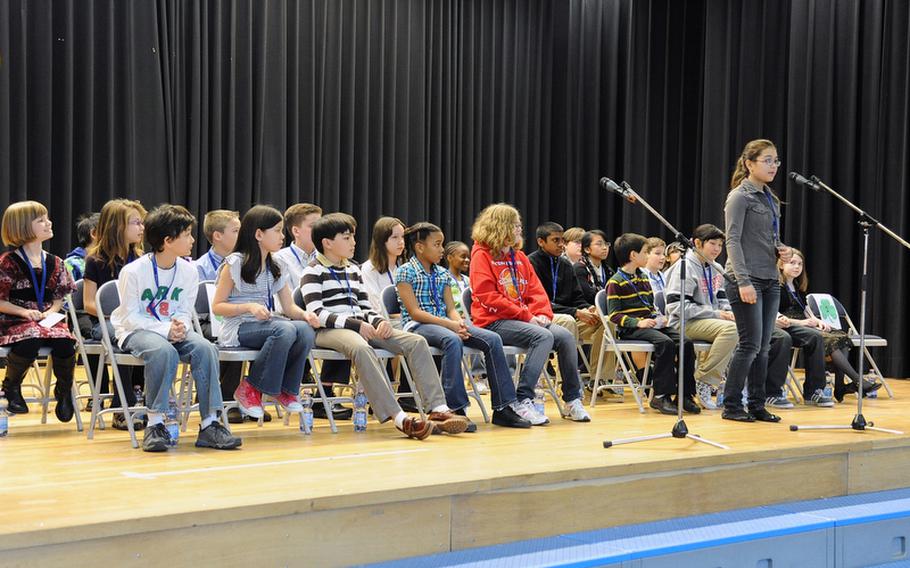 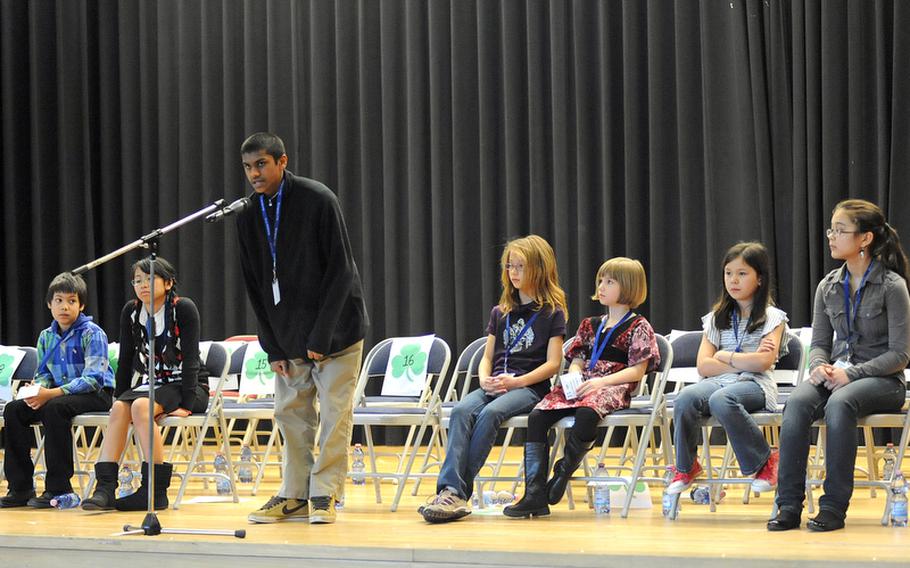 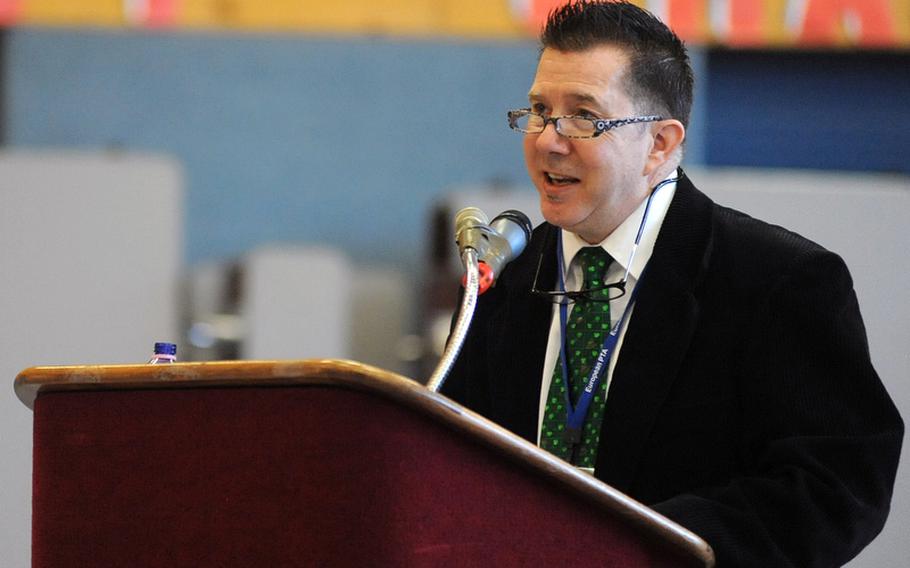 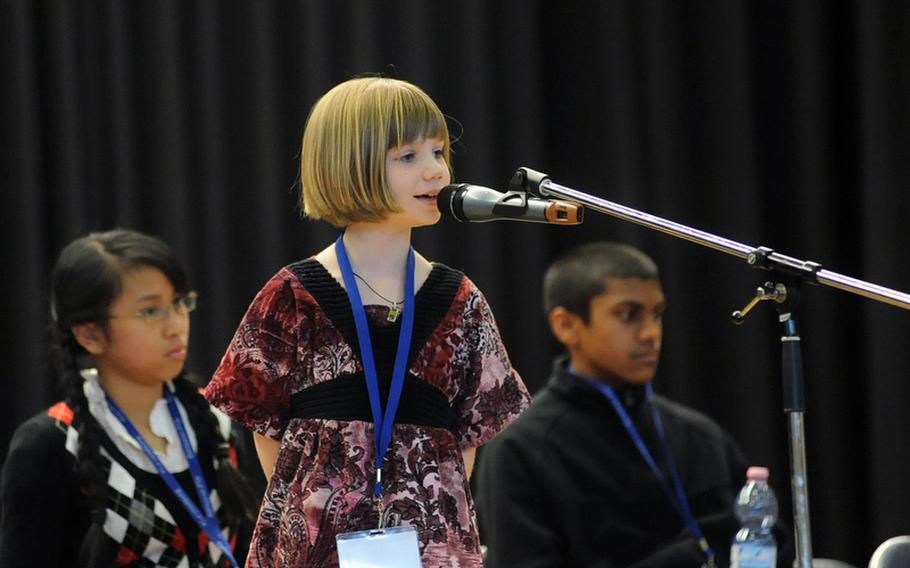 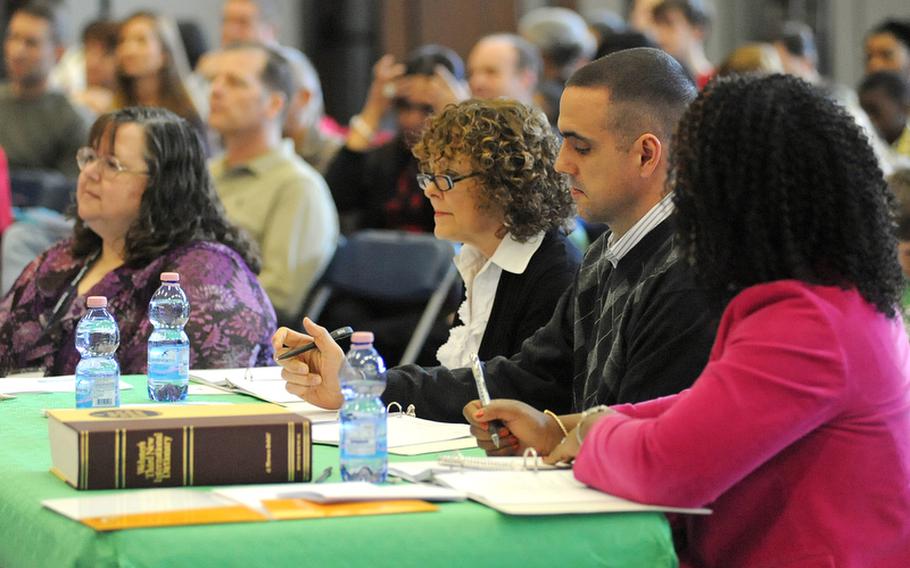 Buy Photo
The judges, from right, Wendy Dean, Chad Grant and Dell McMullen check to make sure a participant&#39;s spelling is correct at the European PTA Spelling Bee in Ramstein, Saturday. At left is Sharon Gilbert, the spelling bee chairperson, who also moderated the event. (Michael Abrams/Stars and Stripes)

RAMSTEIN AIR BASE, Germany &mdash; It was Round 23 when Naples Elementary fourth-grader Kayla Lucas was asked to spell &ldquo;misogynist.&rdquo;

No problem there: The 10-year-old remembered the first four letters spell one of her favorite foods, Japanese miso soup.

After finishing second at last year&rsquo;s European PTA Spelling Bee, Kayla was hoping this would be her year.

Anuk, 13, proved unflappable once again, beating out 27 rival contestants Saturday on the stage at Ramstein Elementary School and earning his second trip to the Scripps National Spelling Bee in Washington, D.C. in May, where he&rsquo;ll represent Department of Defense Dependents Schools Europe.

&ldquo;I feel pretty good,&rdquo; he said before collecting his prize dictionary, which a presenter suggested he might give to his sister, since he already has one from last year.

It was a hard-earned victory. This year&rsquo;s bee lasted a tense 27 rounds &ndash; compared to 19 last year &ndash; and Anuk and Kayla once again were the last two spellers standing.

Emotions ran from jubilance to anguish. Spellers wore big smiles when they heard &ldquo;correct&rdquo; from the judges, others sighed with relief. When eliminated, some contestants quietly wiped away tears while waiting for the round to end, and then fell into their parents&rsquo; waiting arms.

Confident newcomer Olivia Demonstranti ran back to her seat and sometimes clapped and kicked up her boots when she spelled a word right. The third-grader from Garmisch Elementary/Middle School hung in for 20 rounds, bowing out on the Japanese word &ldquo;sansei,&rdquo; meaning third generation. Olivia spelled &ldquo;sensei,&rdquo; meaning master or teacher.

&ldquo;She&rsquo;s always been a very good speller and an early reader,&rdquo; said her mother, Kristina Demonstranti.

Zachary Misurak of Vilseck Elementary School and Aiyanna-Jizelle Ordillas of Schweinfurt Elementary/Middle School hung in a bit longer, both misspelling words in the 24th round. Aiyanna-Jizelle added an &ldquo;i&rdquo; to the end of &ldquo;fibula&rdquo; and Zachary left out the second &ldquo;n&rdquo; in &ldquo;openness.&rdquo;

Kayla continued to sail through, taking her time on each word and asking the pronouncer for words&rsquo; definitions, language of origin and alternate pronunciations. She finally stumbled on &ldquo;moorage,&rdquo; leaving out the second &ldquo;o.&rdquo;

Anuk then spelled &ldquo;solace&rdquo; correctly, and the championship word, &ldquo;limpet.&rdquo;

Anuk, meanwhile, is looking to improve on his 42nd place at last year&rsquo;s national bee. His game plan is to &ldquo;study larger words and look more at roots.

&ldquo;You&rsquo;re not going to know every word &hellip; [by studying roots] you can break the words down,&rdquo; he said.

With the regional bee open to DODDS-Europe students in third to eighth grades, Anuk expects to be back next year.