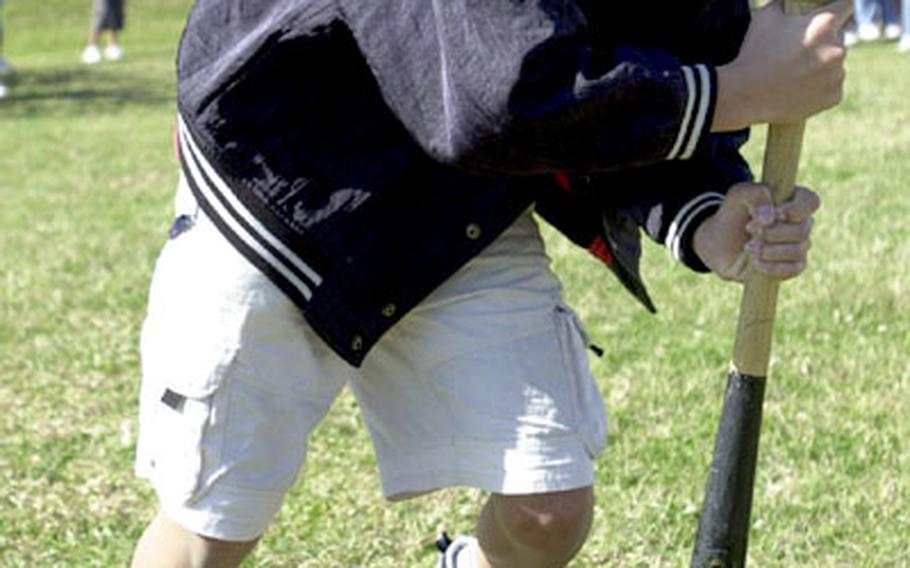 A sixth-grade student from Yonabaru Elementary School takes his turn at the “dizzy izzy” during a field day with fellow sixth-graders at Amelia Earhart Intermediate School on Kadena Air Base on Wednesday. More than 110 Yonabaru sixth-graders visited the school during a cultural exchange day. (Fred Zimmerman/ S&S)

KADENA AIR BASE, Okinawa &#8212; Sixth-grade students from a Department of Defense Dependents School here and a local Okinawan elementary school recently proved that, despite a language barrier, they could learn cultural lessons from one another and have a little fun.

Sarah Gatus, Amelia Earhart&#8217;s sixth-grade level chairperson, said the Kadena students visited the Yonabaru school in November and had such a good time that they wanted to reciprocate the hospitality.

They spent most of the rest of the day outdoors participating in a field day with their American counterparts, with events like the &#8220;dizzy izzy&#8221; and a tug-of-war.

Holding events like this is a great way to build relations with neighbors, Gatus said.

&#8220;This is a great way to foster better relationships with our host nation country,&#8221; she said. &#8220;It also gives the students a better perspective of the foreign culture. Some students never go off-base, so we provide them with the opportunity to learn about the culture.&#8221;

The base trip also was a first for many of the Yonabaru students, according to Isao Kinjo, Yonabaru assistant principal.

Kinjo said many students were blown away by how large the base was and how big the school buildings and playgrounds were. Language differences seemed not to matter for the students.

&#8220;They were playing soccer or jump rope together. There must be some language that only children can understand,&#8221; Kinjo said.

As part of Yonabaru Elementary&#8217;s integrated-learning classes, the students learn about international understanding. This year, interacting with the American students was the main activity, Kinjo said.

The students also learn English approximately five to 10 hours a year, with the program focusing on English communication skills.

Kinjo provided some entries from the journals the students keep at the school.

Serika Nagayama, 12, wrote, &#8220;The first thing I thought when interacting with Amelia elementary school was that the school was big. I had a lot of fun playing together although our languages and cultures are different. I hope to see people from Amelia school sometime in the future and play together.&#8221;

Nana Uehara, also 12, recalled how friendly the American students were as they were quick to try and communicate with her and asked her to sit with them when she couldn&#8217;t find a seat during lunch.

Kanna Goya wrote about how big the school was and that the playground was big and grassy. She also commented on the choir&#8217;s performance.

She also expressed her appreciation for the visit.